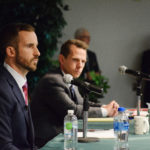 Senate Majority Leader Ryan Ferns, R-Ohio, and Democrat William Ihlenfeld squared off for 90 minutes during the event at West Virginia Northern Community College’s B&O Building. The auditorium was packed with about 250 people.

The debate was sponsored by The Intelligencer and Wheeling News-Register, and Managing Editor John McCabe served as moderator.

Ihlenfeld, a former U.S. attorney, was asked his thoughts on the teachers walking out earlier this year.

“They had no other choice,” Ihlenfeld said. “The leaders in Charleston weren’t going to listen to them any other way… . There are a lot of teachers and service personnel who would have been proud to spend the night in jail in Charleston, West Virginia — if that’s what it meant to get what they had coming to them.”

He said Attorney General Patrick Morrisey made the right decision to not take action against the teachers.

“I’m not an attorney, but I don’t think it’s a realistic option to put teachers out of their jobs,” Ferns said. “I know the teachers who went to Charleston felt they were undercompensated, and I couldn’t have agreed more….

“But my primary concern was can we afford this,” he said. “I didn’t want to be in a situation where we give these pay raises out, and eight months later we’re back into a special session where we’re talking about raising taxes or cutting some essential service of the government. We want to make sure the money is there, and it’s guaranteed.”

Talk about education in the state continued as the candidates were asked their thoughts on West Virginia’s current education system, and if charter schools should be in the mix.

“But I think we can always do better,” he said.

Not all children come to schools on an even footing with other students, and Ihlenfeld said measures need to be taken to account for that. He suggested the concept of trauma-informed schools, places of learning to better help students with issues in their lives.

“When it comes to our education system, conversation is definitely part of the picture,” Ferns said. “There is no secret we had a statewide teacher’s strike, and I think we were able to come to a resolution there that resulted in a large pay raise for our teachers.

“Our governor and leadership have also announced doubling down on that,” he said. “We said once we had additional funds, the first thing we would look to do is to improve the pay so we could recruit and retain the best teachers.”

West Virginia is one of the few states that does not have charter schools, according to Ferns. He said he has read reports of their being very successful in focusing on specific needs of students in a community.

“Taking that option off the table is a mistake for West Virginia,” Ferns said. “We can always improve, and an all of the above approach is what is best for the state.”

Ihlenfeld took issue with Ferns’ words that Republican leadership was responsible for the 5 percent wage increased gained as a result of the teachers’ walkout last spring.

“I don’t like the false narrative that’s being pushed down,” he said.

He also referred to Ferns as part of a small group in the Legislature that tried to break the resolve of the teachers.

Ferns, meanwhile, noted that between 1992 to 2015 teacher pay in West Virginia dropped from 30th in the nation to 48th. He said that occurred under a Democrat-controlled Legislature, and it has only been in the past four years since Republicans took over that teacher pay has began to climb.

“It is only now that Democrats seem to be the cheerleaders for teacher compensation,” he said. “We said if we had additional funds we would give additional raises, and that is exactly what we’ve done.”

Ferns served as chairman of the conference committee that was considering the raises for teachers and other state employees, and that it was both his and the Legislature’s primary responsibility to make sure the state could afford the tax dollars being appropriated in the legislation.

The bill before the committee gave teachers a 5 percent raise, but lesser raises for other state employees. Republicans held out to see all got the same increase, Ferns said.

A major issue of the teacher’s walkout was the cost of their health care premiums through the Public Employees Insurance Agency, and that the PEIA system needed to be revamped.

Ihlenfeld suggested an increase in the state’s oil and gas severance tax could serve as a dedicated funding source for PEIA. He supports legislation proposed last year — but not passed — that would have raised the tax from 5 percent to 7 percent.

“The gas is under our ground,” he said. “The oil and gas companies aren’t going anywhere. They’re going to drill every drop of oil they can. That is our best opportunity to pay for not just PEIA, but many other things we cannot pay for in the state.

“That would be part of my plan, but also looking for other sources of revenue that would pay for our public employees insurance.”

Ferns said severance tax revenues are subject to peaks and valleys, and aren’t a reliable resource to fund PEIA. He suggested the PEIA system needed a structural overhaul.

Ferns and Ihlenfeld agreed that jobs and fighting the opioid addiction problem in the state were the biggest issues facing West Virginia.

He also called for an investigation into why bids for proposed revitalization of the bridges along Interstate 70 came in too high, causing a delay in the project.

Ferns said too many extras were added on to the bid specifications, and this was why the bids came in so high. He said an investigation did take place.