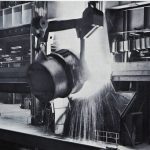 WEIRTON — George Gaughenbaugh walked into Weirton Steel’s famed “mill of the future” in 1981, never dreaming it was going to buy him a house, keep food on his table and put his kids through college.

Back then he was just a wide-eyed 28 year old doing what was expected of guys in the 1970s — finish high school then get a job in the mill, marry, raise a family.

“Everything was just so massive, and I took it for granted,” said Gaughenbaugh, who spent 25 of his 46 years at Weirton Steel working in the basic oxygen plant, that “mill of the future.”

Make no mistake, the BOP was massive.

News stories from the day describe the 250,000 square foot plant as 20-stories high. If you counted the rail line and staging yard, they said it covered more than six acres at the north end of town.

But, by 8:30 a.m. Saturday, it will be gone: strategically-placed demolition charges will have been detonated and all that will be left will be a pile of twisted metal. Once crews from the Frontier Group of Cos., the company that bought the land, finish salvage operations, the site will be repurposed for some as-yet unknown buyer.

It’s a sad ending to a story that began in 1967 when cranes lowered the last piece of structural steel into place at the BOP — the crowning jewel of an ambitious plan to turn Weirton’s aging mill into a steel-making marvel.

The BOP brought together three key processes — basic oxygen steel production, vacuum degassing and continuous casting — operating for the first time in a high-tonnage operation. All three were fully automated and state-of-the-art.

To make space for it, the company two years earlier had demolished its vaunted “shell plant,” a warehouse-turned-factory that churned out as many as 70,000 howitzer shells a month in the 1940s for the war effort, helping Allied forces “rain death and destruction on the Nazi fortress in Europe.”

In unveiling the plan, then-Chairman Thomas E. Millsop told reporters the plant “will be a preview of the steel mill of the future.” The tag stuck, though Millsop himself didn’t live to see its first heat in 1967.

Frank Comoroski spent most of his 36 years in the mill as a conductor on the mill’s railroad, sometimes delivering “T-bottles” — railroad cars loaded with liquid iron — to the BOP.

“I’d stand in the doorway on the bottom of the BOP sometimes looking up watching them turn the iron into steel,” he said. “The charging crane would dump scrap in the BOP ladle and move out of the way, then another charging crane would come with a ladle of iron, tons and tons of iron, that it would slowly tip into the BOP ladle, then the BOP ladle would turn upright. They’d lower the lance, and it would make a big loud roar, that’s when the oxygen would come into the iron to try and melt the scrap, make a heat. There’d be sparks all over.”

He spent an entire year at the BOP in the ’80s, when the mill’s bottom line “started to go south and they were laying people off like crazy.”

Comoroski said mill life wasn’t for the faint of heart.

“If it didn’t scare you, there was something wrong with you,” he admits. “It was scary, it was a thrill, it was exciting. It paid good money, we raised our family there.”

Gaughenbaugh said there was a time when the BOP would do “20, 25 heats a day” and he’d wonder where all the steel made there was going.

“I kept thinking it would never end,’ Gaughenbaugh said. “I can’t believe it’s coming down, but I guess if it’s not going to run (it needs to). Having served on council, I know we have to open up the property. Nobody’s going to be able to do anything with that building, it was built for one purpose and one purpose only. Now we need to get ready for the future.”

But Comoroski said that doesn’t mean anyone has to be happy about it.

“It’s sad what’s happening, it really is,” he said. “It’s upsetting what we’ve lost, how we’ve lost the mills. Its a way of life that’s gone — that makes me angry, it makes me sad.”