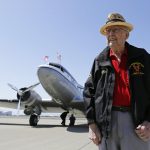 In this photo taken April 29, 2019, D-Day veteran Jake Larson poses before going for a ride in the “The Spirit of Benovia” World War II-era aircraft in Oakland, Calif. Both Larson and the former C-53 Skytrooper transport plane plan to be in Normandy, France and take part in events for the 75th anniversary of D-Day. The plane takes its name after a winery in Sonoma County. (AP Photo/Eric Risberg) 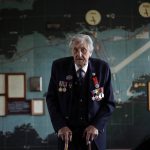 British D-Day veteran Leonard ‘Ted’ Emmings, who was a naval Coxswain serving on a small landing craft which landed 36 Canadians on Juno beach in France, poses for photographs backdropped by the map used to plan the Normandy D-Day landings at Southwick House near Portsmouth, England, May 9, 2019. Southwick House was the forward headquarters of the allied forces preparing for the invasion of Normandy in 1944, the nerve center of D-Day. (AP Photo/Matt Dunham) 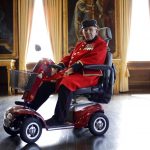 British Chelsea Pensioner and D-Day veteran Frank Mouque poses for a portrait during a D-Day 75th anniversary event in the State Apartments at the Royal Hospital Chelsea in London, May 13, 2019. Mouque, who can’t hear well now and answered media questions by reading them from a piece of paper, was a Sapper and Corporal in the British Royal Engineers. On D-Day he landed on Sword beach and carried with him 21 pounds of explosives to blow down telegraph poles. (AP Photo/Matt Dunham)

World War II and D-Day veteran Charles Norman Shay, from Indian Island, Maine, poses on a dune at Omaha Beach in Saint-Laurent-sur-Mer, Normandy, France, May 1, 2019. Shay was a combat medic on D-Day, assigned to an assault battalion in the first wave of attacks on D-Day, June 6, 1944. (AP Photo/Virginia Mayo) 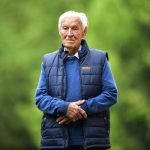 German D-Day veteran Paul Golz poses for a photo at his home in Koenigswinter, Germany, after an interview with The Associated Press on May 17, 2019. Golz and his comrades were taken prisoner by an American patrol on June 9, 1944, three days after the Allied landing. (AP Photo/Martin Meissner) 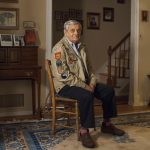 World War II U.S. veteran Frank DeVita, who took part in the D-Day battle poses for a picture at his home in Bridgewater, N.J., May 14, 2019. This June he’ll make his 12th trip back to Normandy. He likes to bring people with him so they’ll know what happened there. (AP Photo/Andres Kudacki) 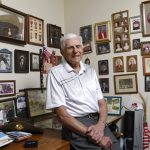 Steve Melnikoff who came ashore Normandy, France on D-Day with the 175th Regiment of the 29th Infantry Division, sits in his home in Cockeysville, Md., on May 21, 2019. His unit was part of the bloody campaign to capture the French town of Saint-Lo through fields marked by thick hedgerows that provided perfect cover for German troops. (AP Photo/Steve Ruark) 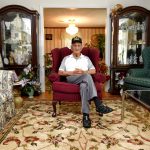 Dennis Trudeau, a World War II veteran who landed in Normandy on D-Day, poses for a photo at his home May, 21, 2019, in Grovetown, Ga. Trudeau had joined the Canadian military at 17 and became a paratrooper in part because they paid an extra $50 a month. (AP Photo/Richard Shiro) 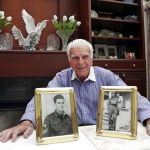 In this photo taken May 20, 2019, veteran Norman Harold Kirby sits with a photo of his mother, Katherine Louise Kirby, and himself, at 17, and a post-war portrait as he poses for a photo at his home in Lions Bay, Canada. The Canadian from British Columbia had joined the army when he was only 17 and was barely a 19-year-old private when he climbed into the landing craft that would take him to shore on June 6, 1944. (AP Photo/Elaine Thompson)

The men who fought on D-Day, June 6, 1944, are now in their 90s or 100s, wrinkled and often moving with the help of a cane or wheelchair. Their hands often tremble and their voices shake as they labor to speak. But 75 years ago they were young men, many in their teens, preparing to go to war.

For those in the invasion force, they had months of rigorous training. They clambered down precarious rope ladders into landing craft or climbed into planes, parachutes strapped to their backs.

The determined German defenders were dug into pillboxes, trying to hold the high ground.

Scared? Of course. Many in the Allied forces had never seen combat. But they were also determined to do their jobs and perhaps more importantly not let down the man, the buddy, the friend fighting beside them.

The Associated Press captured images of D-Day veterans from the United States, Great Britain, Canada and Germany who are returning to Normandy for the 75th anniversary. For some. it will be their first time since they fought there. Others have made repeated pilgrimages to the sandy beaches. They will remember the choppy waters lapping at the ships, the flash of the tracer bullets, the roar of the artillery, and they’ll say a prayer for those who did not make it back.