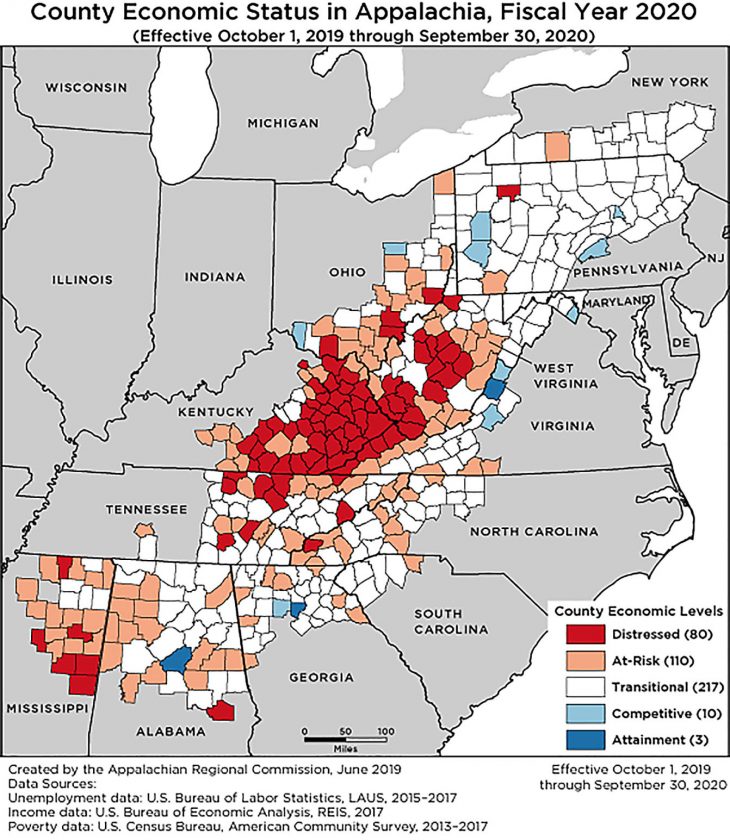 WHEELING — A study commissioned by the Appalachian Regional Commission indicates the Ohio Valley still has challenges to overcome if it is to compete with the rest of the U.S. and the world.

Local development leaders, however, say the figures used don’t reflect what is happening locally or “the hope that is there” for the future.

The report, “The Appalachian Region: A Data Overview from the 2013-2017 American Community Survey,” ranks counties in Appalachia as either being “distressed,” “at-risk,” “transitional,” “competitive” or as having reached “attainment.”

All other counties in the Ohio Valley were listed as “transitional,” with few of the other Appalachian counties in Ohio or West Virginia achieving higher status.

“It misrepresents the story playing out today in Hancock County. It’s not a forecast of things to come,” he said. “Specifically, if you just look at where we are today versus 10 years ago, it definitely does not forecast what we see in the future.”

A decade ago, Hancock County’s unemployment rate was as high as 13.7 percent, he said. Today it stands at just over 4 percent.

Ford said there has been $9 million in public investment to improve the infrastructure in Hancock County as the area prepares for about $194 million in private investment. He expects the efforts could result in the creation of as many as 2,500 jobs.

“Hancock County’s time is coming,” he said. “If you look at these figures, you think there is despair and no hope. What I don’t like about reports like this is the data doesn’t tell the whole story.

“There are shovels in the ground from Wheeling to Chester. You wouldn’t know that if you read that report. You have to get in the car and see it. You can feel it.”

The study examined state- and county-level data for the 13 Appalachian states from the 2013-2017 American Community Survey (ACS), and from the 2010 U.S. Census.

Also examined was data on types of housing units, homeownership, types of living arrangements, travel time to work and location of work, and income-to-poverty ratio. Computer device ownership and access to internet also was considered.

The study compared county averages with national averages for three economic indicators–three-year average unemployment rate, per capita market income and poverty rate. The values resulted in a composite index value for each county.

The numbers don’t take into account the opening of the JSW Steel Plan in Mingo Junction with the hiring of about 200 employees, or a number of other businesses making plans to open or expand as the oil and gas industry takes hold in the area, she said.

“It doesn’t include a lot of exciting developments happening in Jefferson County in the next three years,” she said. “It will be turned around.”

“The study takes into account many other factors — such as poverty and drug issues so it (the at-risk ranking ) is still not a total surprise,” he said “Appalachia is always trying to recover from the de-industrialization of its past … But one would think things would only improve over the next few years as more jobs are created.

“I’m a proponent of diversifying the area. I don’t want all our eggs in the same basket. I’m trying to work with educational institutions to get them to partner with businesses (to get people the working skills that will be needed.) That’s what is important to area is diversity and assisting industries and the businesses that spin off from them. We want to allow them to try and grow in many areas.”

In the southern end of West Virginia’s Northern Panhandle, Eric Peters, executive director of the Tyler County Development Authority, said he wasn’t bothered by his county’s “at risk” rating.

“We have been considered at risk for decades,” he said. “We are improving, but the criteria used to determine the ‘at risk,’ and ‘distressed’ rankings is pretty complicated. It’s not just about the economics of the region, but access to health care, education and other things. It has been difficult for rural counties to transition.

“I’m not disturbed by the ‘at risk’ ranking because we still have issues to address.”

Peters seeks a more diverse economy for the county, and also wants to bring more women into the workforce.

“We also need to focus on wellness,” he said. “We have to coach better health habits, and provide more access to health care.”

Jefferson County in West Virginia’s Eastern Panhandle was the only county in the state to achieve as high as a “competitive” ranking. All counties in West Virginia are considered Appalachian counties and ranked in the report.

In Ohio, nearby Holmes County and Clermont County in Western Ohio were given “competitive” ratings.