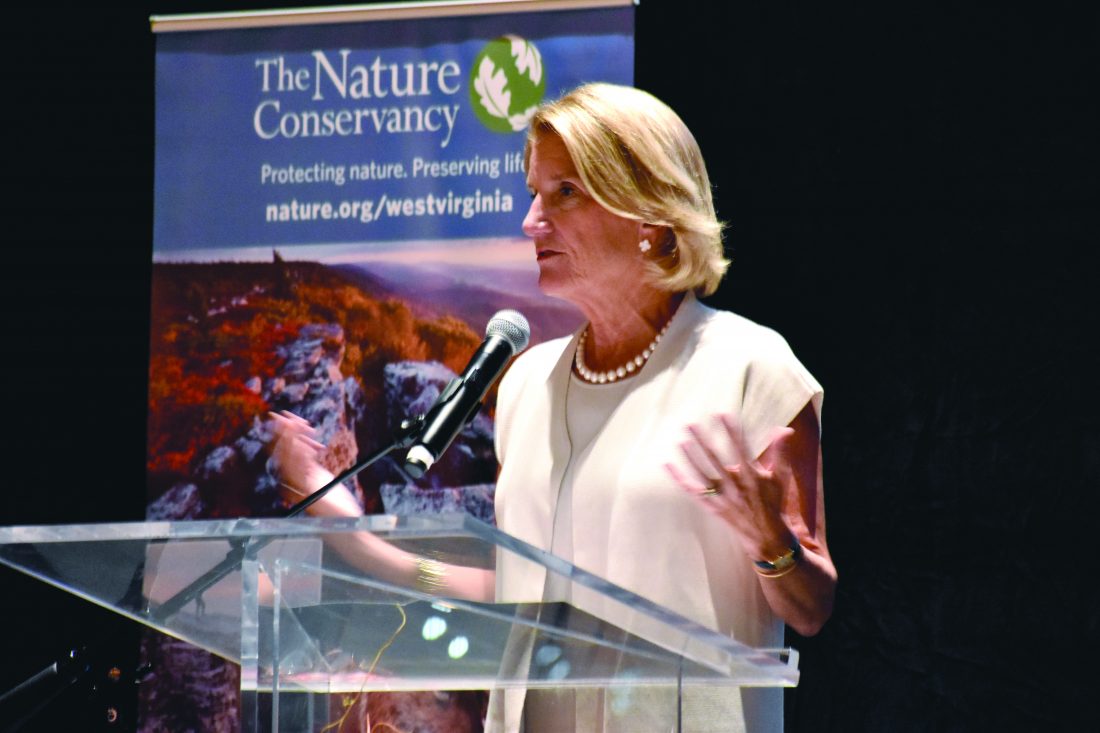 CHARLESTON — Can business and conservation go hand-in-hand? According to U.S. Sen. Shelley Moore Capito, they can, and West Virginia is a prime example.

Capito, R-W.Va., was the keynote speaker Thursday night at the West Virginia chapter of the Nature Conservancy’s Corporate Council for the Environment Dinner at the Clay Center for the Arts and Sciences in Charleston.

“I’d like to start off by thanking the Nature Conservancy for this honor,” Capito said. “It’s my pleasure to help advance the conservation of West Virginia’s incredible natural beauty. I’d also like to extend a special thank you to everyone here tonight for your commitment to the Nature Conservancy and all of its efforts.”

Founded in 1951, the Nature Conservancy Cis an international non-profit that brings together the business community and environmentalists to develop solutions for conserving land and water.

In West Virginia, the Nature Conservancy protects more than 120,000 acres in the state, including areas like Dolly Sods in the Potomac Highlands, Ice Mountain in the Eastern Panhandle, and the Greenbrier Valley. This work involves protecting ecosystems, plant life, and wildlife. At the same time, the Nature Conservancy balances this preservation with ensuring economic development and growth.

Thomas Minney, state director for the Nature Conservancy, said the annual dinner is proof that business leaders and those involved with soil, water, and wildlife conservation can work together for a common goal.

“This is where we see that there is actually a really broad-based support and interest in the work that we do,” Minney said.

“West Virginians love the thought of protecting nature and the outdoors. It’s embedded in us. It’s how we grew up feeling. It’s the people that we are.”

Capito singled out the Land and Water Conservation Fund, which just received $1.8 million for West Virginia conservation projects. Established in 1964 and placed under the U.S. Interior Department, the LWCF collects royalties from offshore oil and natural gas drilling for use in protecting national parks, preserves, water resources, and wildlife areas.

“The Land and Water Conservation Fund is one of the country’s most effective conservation programs,” Capito said.

More than $243 million has been spent by the LWCF since 1965 on more than 500 projects, including the Gauley River National Recreation Area, New River Gorge National River and Dolly Sods. In March, Congress voted to reauthorize the fund permanently, which Capito said will bring more certainty for conservation projects in the state.

“The Senate recently joined in a bipartisan way to reauthorize the LWCF permanently,” Capito said. “This is great news and something I really pushed to make happen while serving on the Energy and Natural Resources Committee. With this permanent reauthorization, this federal program can and will continue to enable investments that bring environmental, community, and economic returns for years to come.”

“Senator Capito knows that incorporating natural infrastructure into transportation projects can help buffer them from flood impacts and save money,” said Beth Wheatley, director of external affairs and strategic initiatives for the Nature Conservancy.

“For example, specified in the legislation is the ability to build larger culverts that can withstand floods and not be blown out, saving money,” Wheatley continued. “When they do blow out, they often take out the road infrastructure with them, thus shutting down roads and causing costly repairs. In addition, such culverts work with nature, providing co-benefits such as sustaining stream flow and fish habitat.”

“I also championed resilience measures in the transportation bill to help ensure smart investments of public dollars in infrastructure that will withstand natural disasters, reduce costs, and prevent additional impacts to ecosystems,” Capito said. “This important bill is what it looks like to plan for and invest in the future.”

“The re-designation of the New River Gorge has the potential to catalyze economic growth in the area and attract adventure lovers from around the country,” Capito said. “This would be at virtually no cost, and it would allow us the opportunity to really rebrand this area and attract new visitors with just a simple name change.”

According to Capito, outdoor recreation — including from camping, boating, hunting, fishing and other activities — brings in $9 billion to the state and results in 91,000 jobs. That’s why she said it is important for business and conservation to work together.