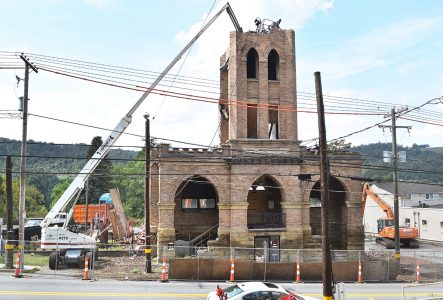 Crews with Edgco, Inc., of Lansing continue to demolish the former Sacred Heart Church in North Wheeling this week.

WHEELING — Brick by brick, crews continue to demolish the former Sacred Heart Church in North Wheeling this week, after it was destroyed by fire in July 2018.

Standing atop what remains of the church’s nearly 90-foot tall bell tower, crews with Edgco, Inc. of Lansing, continue to meticulously chipped away at the shell of the structure.

Edgco owner Bruce Edge said dismantling the church tower is a bit of a slow process because of the position of the tower. Not only is it located along the heavily-traveled North Main Street, the top half of the tower is positioned next to power lines.

“If you use a machine up that high, a big piece could fall and take the main power wires out,” Edge said as he watched crews chip away at the tower by hand.

He said Edgco began demolishing the church about a week ago, and he expects the demolition to last about another week. Edge said he plans to use an excavator on the tower once it is clear of the power lines.

The fire, which occurred July 7, 2018, destroyed the church roof as well as much of the first floor, according to Joyce Wolen, executive director of the Wheeling Housing Authority, which owns the property.

She said water damage also greatly impacted the structure, and the insurance company felt the damage was too extensive for renovation of the building.

Located at 99 N. Main St., the old church building last housed the Augusta Levy Learning Center, which served children with autism for eight years prior to the fire. The learning center now operates out of a location on Market Street in downtown Wheeling.

In addition to Augusta Levy, the fire also displaced the congregation of the Faith Community Church, which relocated to a property on Kenney Street.

The church building was first dedicated in 1904 and the Wheeling Housing Authority purchased it in 2000 as part of the Hope VI housing program. Wolen said the property will be returned to green space “for the time being.”

The Wheeling Housing Authority has no specific plans for future use of the property. She said once the building is torn down, the authority plans to place a plaque on the site in memory of the church.

Wheeling fire investigators determined the cause of the July fire to be accidental, starting in an electrical junction box mounted on the ceiling of the building. No one was in the structure when the fire started.