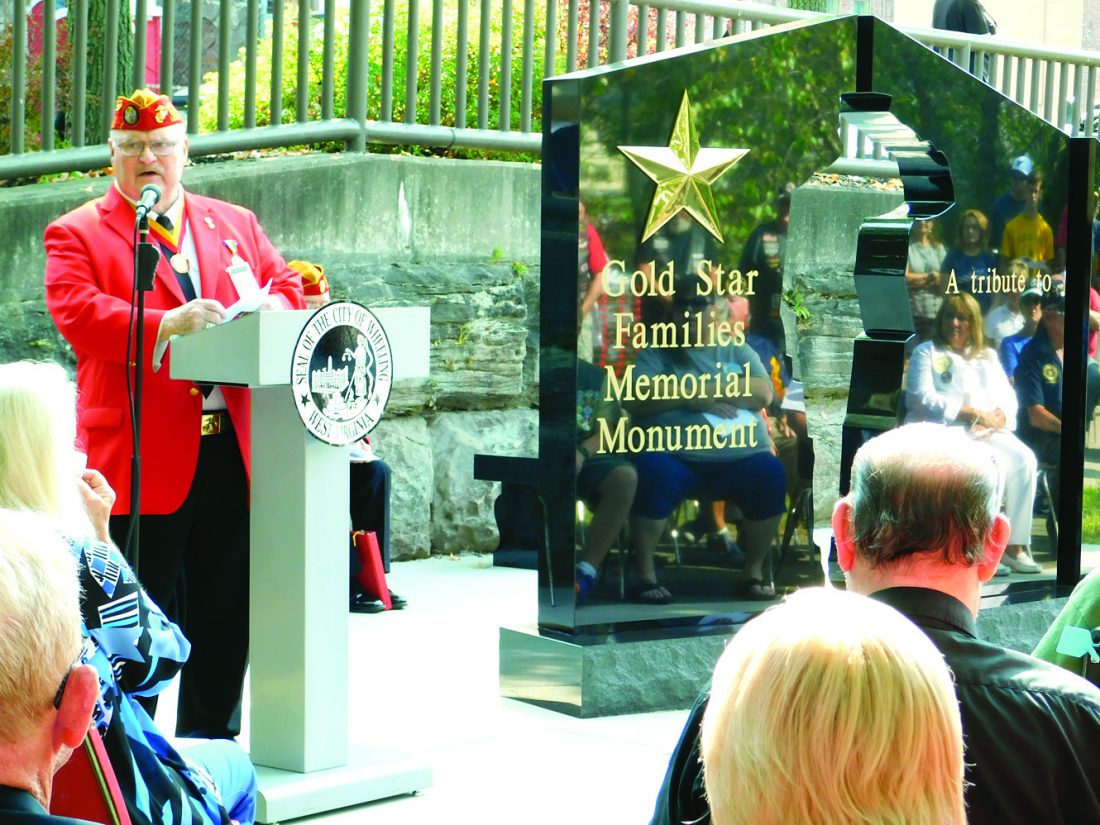 Photo by Robert A. DeFrank John Nanny of the Marine Corps League, welcomes attendants Saturday to the dedication of a Gold Star Family memorial monument at Wheeling Heritage Port.

WHEELING — A monument to honor those who gave all they had for their country and the loved ones left behind will stand in Wheeling Heritage Port.

On Saturday, area residents, veterans and officials gathered for the dedication of a Gold Star Family memorial monument.

Hershel “Woody” Williams, West Virginia’s only living Medal of Honor recipient from World War II, spoke at the ceremony. At age 96, Williams was enthused by the monument and recognition of fallen servicemen and their families. He related the history of Gold Star families, originating in World War I when families would hang a blue star in a window designating service, and gold star for those who lost their lives.

“We are in a sense educating America about what Gold Star families really mean. We have never done that before in this country,” he said, adding that the practice continued into World War II and onward.

“My mother had three (blue stars) hanging in her front window because three of us at that time were in the war. Two brothers in Europe, and I was in the Pacific,” he said.

“Wheeling is one of West Virginia’s most historic communities,” he said. “It’s again making history by placing this monument here in this community. It is the community that did it. … It honors the families of this area, and there are a lot of them we do not even know. Perhaps even this morning, Gold Star families learned who another Gold Star family was because of our gathering here this morning. Because we have not made an effort in this country to bring those people together. They all suffer the same heartache. The pain never goes away.”

He gave special thanks to Susan Whitlatch and the West Virginia Patriot Guard Riders, Fritz Sweeney the Marine Corps League construction consultant, Mark Sharpsky of Sharpsky Printing for providing programs at no cost, Savage Construction for cutting the bill for the monument, and Smith Concrete for completing work at no charge.

Nanny said thanks to donations from Wheeling, Ohio County, the Diocese of Wheeling-Charleston, Ogden Newspapers, the Wheeling Elks and other businesses, law firms, veterans organizations and individuals including Gold Star families, the effort raised more than $62,000 and paid for the monument in full.

Several area Gold Star family members stepped forward at the dedication and gave emotional testimonials about their lost loved ones.

“This is wonderful,” Patricia Pockl of Wheeling said. She spoke of her brother, Michael Paluch, who died in 1944 and was laid to rest in Rome. “I was only three and a half when he died.”

Nanny said he has known Pockl for some time and this was the first he had heard of the story.

“I think it’s one of the greatest things to ever hit Wheeling, West Virginia,” Stephen Duncil of the Marine Corps League said, adding he was honored to meet Williams.

Duncil indicated his Purple Heart and Bronze Stars. “I was wounded three times. … I managed to come home. This monument’s for those who didn’t come home. I think it’s wonderful and John Nanny deserves a lot of credit for this.”

“People need to see what they need to remember. There’s too many of us dying now that are forgotten, and the families need to be honored,” David Rock of Wheeling said. “I’ve seen quite a few that didn’t come back.”

Williams recognized Nanny and Elliott as an honorary members of the Hershel “Woody” Williams Medal of Honor Foundation for their leadership.

“We were very proud to be able to be part of helping you to bring this monument to fruition,” he said. “Semper Fidelis. God Bless America.”

Wheeling Vice Mayor Chad Thalman and council members and officials also attended the event and commended the accomplishment of answering Williams’ challenge to join communities across the country in erecting a Gold Star monument.

“The monument has become a reality, thanks to donations from local organizations, government entities, churches and individuals,” he said. “We are pleased to be just of seven monuments in the State of West Virginia. …Gold Star families, it’s because of you that we are here.”

An effort is also underway to bring a monument to Moundsville.