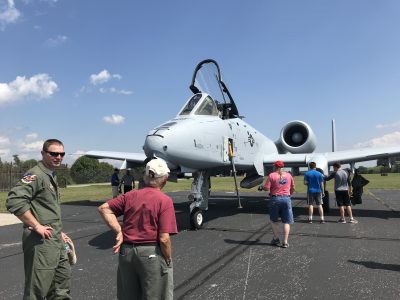 Maj. Jonathon “Cliffy” Alberts of the Maryland Air National Guard talks to visitors while showcasing the A-10 Thunderbolt II he landed at the Wheeling-Ohio County Airport on Thursday.

WHEELING — A fighter jet piloted by a Wheeling native was met by a large crowd of residents when it touched down Thursday afternoon at the Wheeling-Ohio County Airport.

Maj. Jonathon “Cliffy” Alberts of the Maryland Air National Guard arrived at the airport in an A-10 Thunderbolt II to visit family and show locals the military aircraft.

Several dozen residents, many of whom were veterans, visited the airport to see the jet, also known as a “Warthog,” and meet with Alberts.

“It’s great. I’m happy to come home and see a lot of old friends,” said Alberts, who stopped in Wheeling amid flying the aircraft across the country. “It’s nice to give people something and it’s a nice warm welcome. Wheeling’s a friendly town, so it’s nice to be home.”

Alberts, who lived in Elm Grove in his youth, has logged more than 2,000 flight hours in the A-10 and about 300 combat hours across 104 missions. He flew combat in Afghanistan, Iraq and Syria, most notably flying in the Battle of Mosul against ISIS in October 2016.

In April, Alberts returned from Afghanistan and received two medals of commendation from the Air Force, though he wouldn’t tell you that himself, said his father, Jerry Alberts, who now lives in Kentucky.

“I’m very happy. It’s hard to imagine that this is your son doing that,” said Alberts, who drove from Kentucky to see Jonathon earlier in the day. “We’re very proud of him and his service to the country. He wanted to show his family here in Ohio County what our forces are able to do. We’re extremely proud of him.”

Jonathon graduated from Wheeling Park High School in 2000, studied briefly at Wheeling Jesuit University and joined the military in November 2001.

Later on, he finished college at Indiana State University, received flight training with the U.S. Air Force in 2007 and began flying with the Maryland Air National Guard, a unit of the Air Force, in 2010.

One of the veterans who attended the aircraft’s visit Thursday was Donald Kostival Sr., who served in the U.S. Air Force from 1952 to 1960.

“I’m proud of the Air Force,” Kostival Sr. said. “I guess they never had these Warthogs when I was in the Air Force.”

Kostival Sr., who served at various air bases across the U.S. and Aviano Air Base in Italy, stopped by the Ohio County airport along with his son, Donald Kostival Jr.

“We came out to support, with him being a veteran,” Kostival Jr. said. “We’re here to show our support for the Air Force or any branch of the service. This plane, it’s built for close air support of ground forces and it’s built to be a killer of the enemy. It’s a rare occasion that we get to see one here.”

The fighter jet was first manufactured by Fairchild Republic in the 1970s. It has a wingspan of about 58 feet and can reach speeds of 450 nautical miles per hour, according to the Air Force.

Jonathon said he planned to visit with family on Thursday, leave the plane at the airport overnight and depart from Wheeling on Friday.