Employees and residents gather together at final hour 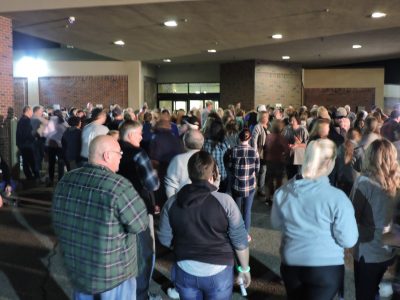 Photo by Alan Olson More than 100 well-wishers and employees gathered for a vigil at the closing of EORH’s emergency room at 11:59 p.m. Friday night.

At about 7 p.m. Friday, Daniel Dunmyer, president and CEO of East Ohio Regional Hospital in Martins Ferry and Ohio Valley Medical Center in Wheeling, confirmed that EORH would close later that evening. He said he had hoped to have the beginnings of a deal for the purchase of EORH by another unnamed company struck by noon Friday. However, no such deal was finalized.

Dunmyer previously had said it was possible the facility’s emergency room would remain open for some time. However, he said Friday that the hospital would close at 11:59 p.m. Employees of the facility hosted a candlelight vigil outside the hospital late Friday, beginning at 11:49 p.m.

“The past and present staff of East Ohio Regional Hospital thank the community and surrounding areas for trusting us with the honor and privilege of profividing you with your medical needs for over 113 years.” the broadcaster stated over a lone radio. “We are grateful for EMS, fire, and law enforcement for their daily sacrifices made for our community. This is East Ohio Regional Hospital, signing off.”

The tone at the vigil was somber, with many sniffling after the final tone-out. Among employees, the shared mood was plain to see.

“I hate it,” said employee Albert Bond. “I’ve worked here for a long time. … It’s such a good facility, the staff are wonderful, hardworking, did their jobs, gave good patient care. The patients loved the staff. It was a nice little community, and we gave good service. You talk about customer satisfaction — all the reports we used to get were: pristine, right there with the patients.”

Though the emergency room’s doors will no longer open for patients, the work of employees will continue, according to former EMSTAR administrative director Irene Louda, who has worked at the hospital in various capacities since graduating high school in 1961.

“There’s a couple long-term patients, but employees are definitely going to be here for a couple days, at least,” Louda said. “For one thing, (the Records department) is doing a lot, and there are many departments where people are still working to keep records, since they need to keep those for so long. But it’s only going to go on until Oct. 6.”

It was the same kind of vigil held Sept. 4 when OVMC in Wheeling closed. Both EORH and OVMC are owned by Irvine, California-based Alecto Healthcare Services. Alecto announced in August that because of financial problems it would close both hospitals within 60-90 days.

Later, a date of Oct. 7 was mentioned by officials as the final date of operation for both facilities. When OVMC closed a month earlier than anticipated, it shocked the community and left other health officials scrambling to pick up the slack.

On social media this week, current and former employees of EORH began sharing that the emergency room was going to close late Friday. Some described the closure of the ER as “flatlining,” referring to the EKG reading that shows when someone’s heart has stopped beating. Others said they were alerted that a deal for the purchase of the facility was not completed.

EORH nurse Lenora Lott of Colerain said she received a message from one of the facility’s doctors, who said a deal he and others were trying to make with Alecto fell through Friday. Lott said she did not know if there were any other groups trying to do the same. However, Martins Ferry Mayor Robert Krajnyak said Friday that he knows there are other groups also trying to make a deal with MPT, the owner of the buildings.

“Another group is trying to negotiate right now. There are ongoing negotiations. A health care provider is involved,” Krajnyak said.

Krajnyak said the deal Lott was referring to actually was being negotiated with the owner of the building, MPT of Alabama.

“A lot of people would come back if they had the opportunity. … We’ve got skin in the game. We want to see this be a success,” Lott said. “It’s just a number to them. This is our heart and soul being pulled down the drain right now.”

Lot said the hospital stopped admitting patients through the ER on Wednesday, though walk-in patients were still being seen at that time. Lott, who works in the medical-surgical-telemetry section of EORH, said she is staying on to help start pack items next week.

Dunmyer said a few long-term care patients remain at the facility. He expected a couple of them to be transferred to other facilities today, with any remaining patients to be transferred elsewhere on Monday. He added that it is still possible that a deal to sell the hospital may be reached, despite the fact that it closed on Friday.