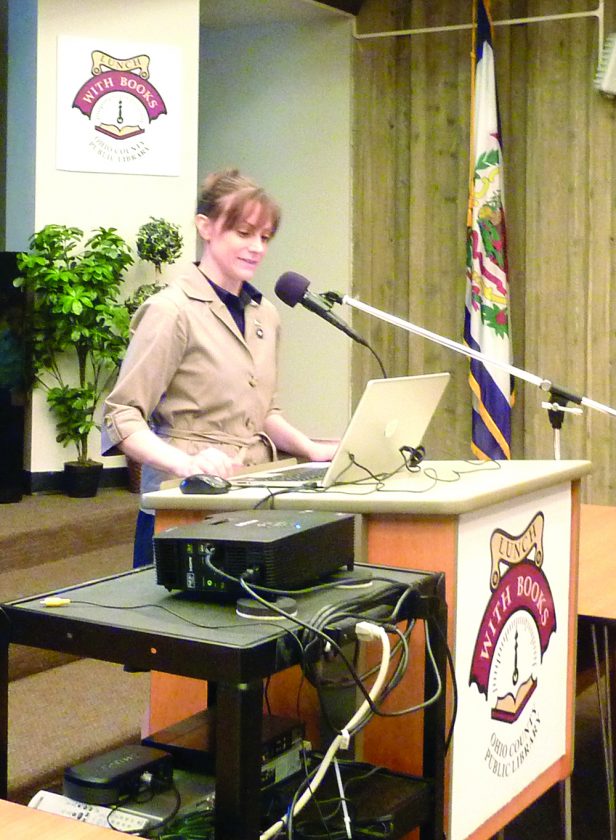 WHEELING — At one time, a person could be fined for flying a kite or rolling a hoop in downtown Wheeling.

This fun fact was shared by Erin Rothenbuehler in a presentation on city government last week for the Wheeling 250 series at the Ohio County Public Library.

Rothenbuehler, who works in the library’s archives department, said the community’s roots can be traced to 1769, when Ebenezer Zane made a “tomahawk rights” claim to land in Augusta County, Virginia. In 1776, the county became West Augusta District, divided later into Ohio County and two other counties.

In 1793, Zane laid out 120 town lots between what is now Eighth and 11th streets. The sale of lots led to disagreements over boundaries, which were settled sometimes by “personal argument or harsher means,” she said.

The General Assembly of Virginia passed an act on Dec. 25, 1795, to establish a town — known as Zanesburg or Wheeling — on Zane’s land. The act set up eight trustees who had power to settle all disputes concerning boundaries of land, she said.

In 1797, the county seat was moved from West Liberty to Wheeling, where the first courthouse often was mistaken for the adjacent Virginia smokehouse, she related. A whipping post, pillory, stocks and a dunking stool were placed behind the courthouse.

Later, in 1803, the trustees’ powers were increased to include protecting property against fire, regulating markets, maintaining streets and imposing fines and penalties. However, they had no power to levy taxes.

The taxing situation was rectified in 1806, when the town of Wheeling was established and George Miller became the first mayor. The trustees were given power to assess taxes, erect schools and public buildings, and prevent the firing of guns and running of horses, she said.

The first taxes were levied to fix the streets, which remained a continual source of complaint among residents. Town leaders also passed a firefighting resolution to purchase hooks and ladders in 1806. The first fire truck was purchased in 1819 and the first fire house opened a year later.

The police department also was formed in 1806. Police were directed “to keep streets clear of cows and pigs so as not to startle passing horses,” Rothenbuehler said.

A lottery was authorized in 1829 to erect water works, which were completed in 1834. The water pumps operated 12 hours a day, except on the Sabbath, she said. The city took over the gas works in 1871.

Wheeling was incorporated as a city in 1836, with Moses W. Chapline as the first city mayor. Terms and number of council members — and methods for choosing or electing the mayor and council — changed many times over the years. By 1863, council had 40 to 50 members, she said.

City ordinances were published in 1855 to cover inspection of flour, weighing of hay and preventon of improper practices. Ordinances prohibited bathing in the Ohio River and Wheeling Creek at certain hours, public lewdness or indecency, firing cannons within certain limits, flying kites and rolling hoops, she said. Cellar doors were not to be left open at night.

Population of the city grew as South Wheeling was annexed in 1874 and several other neighborhoods were annexed in 1919.

The Wheeling Recreation Commission was formed in 1921 and a Better Traffic Commission was established in 1928, at a time when the city’s traffic fatality rate was 20 percent higher than the national average, she said.

Newer groups that were established included the Human Rights Commission in 1962; Wheeling Hall of Fame Board, 1977; Historic Landmarks Commission, 1980, and the Arts and Cultural Commission, 2009.