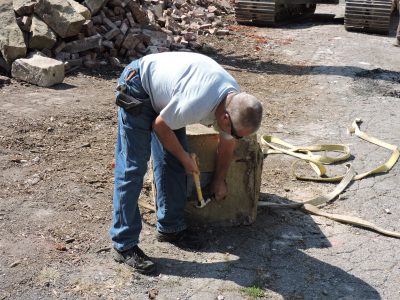 Photo by Alan Olson Gary Trabert, with Edgco, Inc. chisels away part of the cornerstone at the former Sacred Heart Church to retrieve a time capsule.

The cornerstone of the former Sacred Heart Church, which once stood at the north end of Main Street in Wheeling, weathered more than 100 years of wind, rain, and fire.

Friday afternoon, it finally came down with the assistance of heavy machinery.

A time capsule held within the cornerstone was extracted at 2 p.m. Friday, 116 years and 15 days after its Sept. 5, 1903 packaging date. To commemorate the occasion, the Diocese of Wheeling-Charleston located the oldest parishioners who had once attended the church to witness the event.

Charles “Chuck” and Jean Schultz — Chuck being 88 years old, and Jean “much younger” — were driven to the site of the now-demolished church where they had been married more than 45 years earlier.

Inside the time capsule were local and Catholic newspapers from Sept. 4 and 5, 1903, as well as several coins, what appeared to be paperwork from the heating company who worked on the church, and some other paper fragments that did not weather the sands of time.

The Schultzs described the experience as bittersweet, with Chuck Schultz remembering his time as a child where three Catholic institutions were located at that point of Main Street — the church, a school and Wheeling Hospital. Now, none of those structures remain.

Schultz fondly remembered the Rev. John Mueller, a Wheeling native who had spent time in World War II as a chaplain in the South Pacific theater of the war.

After 30 months overseas, Mueller arrived as the pastor at Sacred Heart Church in 1946.

“He was pastor while I went through the school, and had become a very good friend of mine,” Schultz said. “I always thought he was the poster boy for priests. I’m sure he put a lot of our soldiers in Heaven by their last rites. … He was just an all-around great guy. He served God and he served his country.”

Jean Schultz said the two were married at the church in August 1973, and their children were baptized there.

“The church certainly meant a lot to our marriage,” she said. “… Our children were baptized here, and we’d all gather here on Sunday with all the other mothers and dads and their children in the same age group. … It was so, so sad when they closed, and now (that it’s been demolished) it’s even worse. None of our younger grandchildren will know the church like we knew the church.”

Tim Bishop, communications director for the diocese, thanked the Wheeling Housing Authority, and Executive Director Joyce Wolen in particular, for their cooperation in reclaiming the cornerstone.

“The cornerstone … has been gifted back to the diocese, such a great piece of history for the Diocese of Wheeling-Charleston,” Bishop said. “There was always some worry that it would be damaged moving it with heavy equipment, but it was so well preserved.”

The cornerstone itself, as well as the cross that topped the church’s steeple, will be transported to the courtyard at the Cathedral of St. Joseph in Wheeling, where much of the Sacred Heart congregation merged with after its closure several years ago.

Edgco Inc., of Lansing, is demolishing the structure.