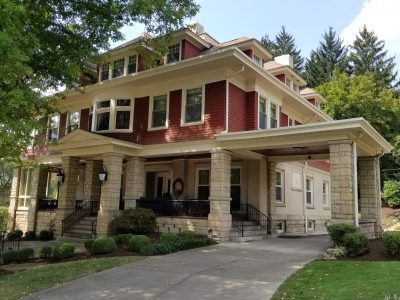 WHEELING — The Wheeling diocesan home of former Catholic bishop Michael J. Bransfield has been sold for $1.2 million, and the proceeds will be placed into a special fund to assist victims of sexual abuse in West Virginia.

The Most Rev. Mark E. Brennan, bishop of the Catholic Diocese of Wheeling-Charleston released the information in a letter Friday to Catholics throughout the diocese.

The home was sold Aug. 23 to David H. and Meredith McKinley, according to Ohio County real estate records. David is the son of Congressman David B. McKinley.

Proceeds from the sale of the former bishop’s home on Elmwood Place will be used to provide professional counseling, psychological and spiritual support for victims of sexual abuse in the state, Brennan said Friday.

Brennan also said that in addition to requiring an extensive audit of diocesan finances during Bransfield’s tenure, he has engaged in extensive discussions with members of the Diocese Finance Council, the priest consultors, chancery staff, lay professionals, parishioners and victims of the former bishop’s sexual harassment.

“It is my intention in the coming days to define the terms of Bishop Bransfield’s required restitution for the harm he caused and the Church resources he squandered,” Brennan said in the letter. “It is my hope that the former bishop will see this as an opportunity to acknowledge his offenses and to truly make amends to the Diocese of Wheeling-Charleston and the good people across the state who have been so deeply affected by this scandal.”

Last September, the Pope Francis announced the retirement of Bransfield as bishop of the Diocese of Wheeling-Charleston in West Virginia and appointed Baltimore Archbishop William E. Lori as Apostolic Administrator of Wheeling-Charleston, with a mandate to conduct a preliminary investigation into allegations of sexual harassment of adults and financial improprieties by Bransfield.

The preliminary investigation, which took place over five months, was conducted by Lori with the assistance of a team of five lay experts. The investigative team examined multiple allegations of sexual harassment of adults and financial improprieties. It involved interviews with more than 40 individuals, including Bransfield.

Last month, Brennan was installed formally as bishop of the Catholic Diocese of Wheeling-Charleston which includes the entire state of West Virginia. He has since been in charge of the Bransfield investigation.

“As I made clear in my installation homily, among my first priorities is to fulfill the Holy Father’s mandate to define the appropriate restitution that will be required of former Bishop Bransfield, in light of his lavish and inappropriate expenditures of Church funds for his personal comfort and enjoyment.

“I share your outrage that so much money was wasted on excessive luxury which is wholly inconsistent with Christ’s spirit of humility and the expectation by Pope Francis that bishops and priests live a life of simplicity and service.”

Brennan said he is committed to working toward a resolution “that is not only fair but which begins to bring closure to this very tragic episode of our Diocese. You have my commitment to do so in a timely way and with the transparency that is required.”

Brennan has been traveling the state and meeting with priests, parishioners and students in an effort to getting to know his diocese.

Meanwhile, the mansion originally belonged to William Weiss, a founder of the Sterling Drug Co. The late Bishop Joseph Hodges purchased the home in 1963 from The Linsly Institute for $63,000.

Fire damaged the mansion in 2005 while it was being renovated for Bransfield before he was installed as bishop. A report prepared by the diocese revealed Bransfield spent $4.6 million on renovations to the house.