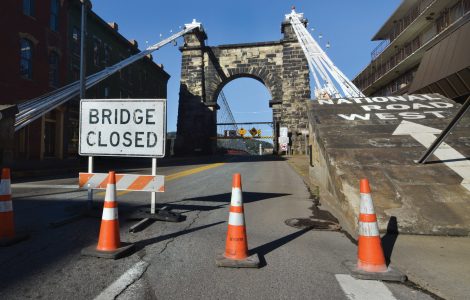 An unofficial survey conducted by the Friends of Wheeling on Aug. 30 found that about 20 percent of vehicles that crossed the bridge during a four-hour period were overweight.

WHEELING — Mayor Glenn Elliott sent a letter Friday to the West Virginia Department of Transportation requesting that it reconsider its decision to indefinitely close the Wheeling Suspension Bridge.

In the letter, addressed to Transportation Secretary Byrd White, Elliott suggests that the state instead consider design and enforcement solutions to allow the bridge to stay open “in a safe and responsible manner.”

“The city of Wheeling shares your primary goal of saving this U.S. National Historic Landmark for future generations,” Elliott wrote in the letter, posted to social media Monday evening. “We cannot and we must not entertain any scenarios in which further damage (or worse) to the bridge is likely.

“At the same time, we have grave concerns about the indefinite closure of this historic bridge right at the time when access to and from Wheeling Island will be limited as a result of the much-needed I-70 Bridges Project in Ohio County.”

The bridge closed to vehicular traffic Sept. 24 after White announced the decision, citing motorists’ disregard of the structure’s weight limit and safety signs. Wheeling Island residents later expressed concerns that the closure will cause problems, given that the bridge is one of the main road connectors to the Island.

The state should keep the Suspension Bridge open to safe and restricted levels of vehicular traffic, Elliott said, which would keep it on the West Virginia Division of Highways road network. Elliott proposed a number of solutions for the department to consider that were discussed at “considerable length” with DOH District 6 engineers at a July 22 meeting.

One option, making the bridge a toll bridge, would reduce the amount of GPS-guided traffic across the structure, Elliott said.

Such tolling could present logistical and legal concerns, he said, but DOH officials said it was feasible.

Elliott further suggested implementing weigh stations to ensure vehicles are under the weight limit and “soft-restraint” bars to deter commercial trucks from crossing the bridge. Other solutions including adding enforcement cameras, making the bridge open for cars only and enforcing spacing requirements.

“If each or any combination of these proposed solutions were implemented, it is my sincere belief that the Suspension Bridge could remain open to vehicular traffic in a manner that is safe, responsible and beneficial to those residents in the City of Wheeling who have come to rely on it for access to and from Wheeling Island,” Elliott wrote.

In addition, Elliott said he understands that part of the rationale behind closing the Suspension Bridge stemmed from an unofficial survey conducted by the Friends of Wheeling on Aug. 30. The survey found that about 20 percent of vehicles that crossed the bridge during a four-hour period were overweight.

Elliott said he spoke with Friends of Wheeling President Jeanne Finstein on the matter. Though the survey wasn’t inconsistent with a general pattern of use of the Suspension Bridge, he said, the group intended to highlight abuses taking place and encourage action, not close the bridge.

“I have had multiple conversations with Ms. Finstein since that survey came out, and she and her organization support reopening the bridge to vehicular traffic but only with additional safeguards put in place,” Elliott said.

Previously, the bridge closed for about six weeks this summer after a charter bus, in excess of the 2-ton weight limit, crossed it from the Island and caused some damage to the structure. DOH crews installed new barriers to keep oversized vehicles off the span, and it was reopened Aug. 13.

Any future repair work on the bridge would be done by the Division of Highways. Funding for an approximate $8.5 million repair project, delayed for several years, is already in place, city officials previously said.