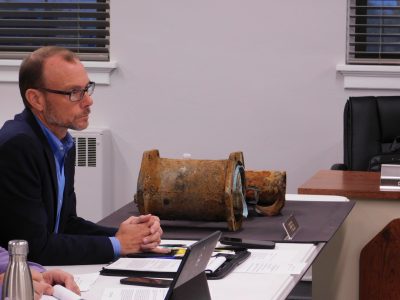 ST. CLAIRSVILLE — Ohio Environmental Protection Agency officials spoke to city leaders during an executive session Wednesday as part of a special council meeting to discuss the water system and to address the vacant council president’s seat, but two council members opposed the executive session and unsuccessfully attempted to have a local engineer attend the meeting.

The aging water plant was inspected by OEPA officials in the summer. They issued numerous costly mandates for improvements in September. City leaders are debating whether to sell the water and wastewater treatment and distribution systems to Aqua Ohio, a private, state-regulated entity, or to order a study to look into other options, costs and funding available to make repairs and maintain local control. On Monday, council will have the third reading of an ordinance to conduct a study and then will vote on the matter. Council also is expected to have the second of three readings on an ordinance to accept Aqua Ohio’s proposed contract.

Ohio EPA Southeast District Chief Craig Butler made a few comments prior to the Wednesday session.

“We’re pleased to be here at the invitation of the mayor and Mr. Zucal. They asked us to come and have a conversation with council about the latest issues we’ve had at the plant and to answer questions. I know they’re working their way through about making a decision about whether they potentially sell the plant to Aqua Ohio or whether they keep the plant,” Butler said. “Our message is: That’s a decision of the city to do. We’re here to support them in that, but that they have some real challenges that they need to overcome no matter what happens, in terms of providing safe drinking water to the community. We’ve recently, after our last inspection of the facility, provided them with a list of significant violations that they need to fix to make sure that the plant is producing safe drinking water, providing that to the community. We’re here to talk about that and make sure they understand that, and those are the expectations … to be rectified as soon as possible.”

Council also needed to consider filling a vacancy left when Tim Porter stepped down as council president last week, citing health reasons. The move came after the release of an audio recording of Porter using profanity and a racial slur in reference to mayoral candidate Bill Brooks. There are about two years remaining on Porter’s term.

Council voted 4-2 to enter executive session to consider appointment of an elected official and to “discuss matters pertaining to federal and state law that need to be held in confidence.”

Council members Mark Bukmir, Linda Jordan, Jim Velas and President Pro Tempore Frank Sabatino voted in favor of going behind closed doors, while Councilmen Mike Smith and Perry Basile voted against. Councilwoman Beth Oprisch was absent. Smith, Basile and Oprisch have been in favor of looking into other options besides privatization.

Smith then invited local engineer Jeff Vaughn to attend the executive session. His motion was seconded by Basile.

Velas questioned the purpose of having Vaughn attend. Smith and Basile said Vaughn’s expertise in engineering could be valuable, should council members have questions.

“Jeff’s really familiar with the county system. He’s familiar with our system and he’s the smartest guy in the room on the technical side of it, outside of (Butler),” Basile said.

Velas, Jordan, Sabatino and Bukmir voted “no” on the motion, opposing “yes” votes by Smith and Basile.

Kathy Wood, one of two residents in attendance, voiced a protest and left the chambers at that point, shortly before the executive session began. Vaughn said he had been asked to attend the meeting by some council members “to help translate what the EPA said to the whole group, so they would better understand the meaning of the technical terminology,” Vaughn said. “No agendas or anything like that.”

“I just want to keep in the forefront of all the council’s minds that the citizens of St. Clairsville are watching what they’re doing. We disapprove of how they’re handling this entire thing,” Wood said.

Council went into executive session shortly before 7 p.m. and came out at 8:15 p.m. No action was taken afterward.

Butler later commented on the possible future of city water rates, but made no recommendation.

“We’re suggesting that as part of their overall plan that they’re going to be required to … look at all options on the table in terms of fixing their overall system. That includes determine what’s the proper rate that the community should have in terms of making and paying for the investments,” Butler said. “We can’t tell them what the rates should be.”

Smith and Basile said they were satisfied with the answers received from the OEPA during the private session. They said they planned to stay their current course opposing privatization.

“Because that’s what the citizens want, so as far as I’m concerned, I’m going to keep fighting for what I think’s right,” Smith said. “I think we all agree that (water service) is pretty bad.”

Safety and Service Director Jim Zucal reaffirmed his view in favor of privatization with Aqua Ohio.

“We have a plan in place, and I think another study is just kicking the can down the road,” he said. “The council was here to hear what the administration has heard many times. These are matters that are safety and health concerns for our constituents.”

City residents have been asked to submit questions to their council members to pose to Butler on Monday during an open session, where the lawyer who negotiated the proposed contract with Aqua Ohio on behalf of the city will answer.