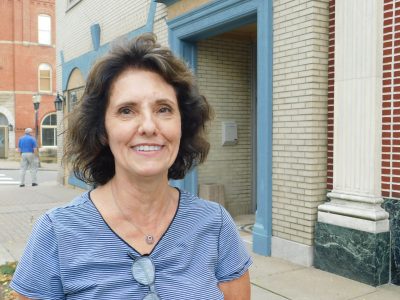 ST. CLAIRSVILLE — The future of water service may be decided in the coming months, with the first of three readings of a proposed contract with Aqua Ohio expected to come before the city council this Monday.

Meanwhile, some council members are putting forward a motion to delay the process to allow an independent study of the water system to explore options for maintaining local control, as opposed to entrusting the private, state-regulated entity with the city’s water.

The Ohio Environmental Protection Agency has also mandated costly upgrades after finding algae blooms in the reservoir that could lead to toxins in the water supply. Most recently, St. Clairsville is asking residents to do what they are able to conserve water, since the dry months have led to the reservoir’s water level decreasing by almost half.

Last week’s heat made getting reactions from residents on the street difficult, but several residents had words to say about the city’s request and about the water debate in general.

Several residents are already in the habit of conserving water. At the St. Clairsville Senior Center, Opal Stewart said she learned at an early age.

“I do not believe in waste of any kind, and if it’s to benefit my county, I will drink one cup of water a day, which, I hate water,” she said.

“I believe in conserving. If you can help in some small way, you should,” she said.

“There are some folks, they could be dying of thirst and they will go out and wash their car and sprinkle their lawn because they do not care.”

“I think it’s really important that we try to conserve the water,” he said. “It hasn’t really been raining much lately. … Me personally, I don’t have any issues conserving water.”

“I used to live in the county, and you did not waste water to begin with,” Marcia Bolner said. “I don’t see how I could use less water.”

She added that her water consumption from the city is also limited because she buys drinking water.

When questioned about the future of water service in the city, some were optimistic. While Kent Jenewein of Kent’s Barber Shop is not a resident and his business only uses limited water, he commented on the heated debates in council.

“We’ve had draughts before and it was never an issue,” he said. “Now there’s an issue.”

“I live out in the country and I have a well,” Norman Doyle, a resident, said from the barber’s chair.

Others were more upset and in doubt about the future.

Resident Lance Rice said he has doubts about privatization and feels council members have already made up their minds.

“I live in the city and I think it’s an absolute horrible idea,” Rice said. “Privatization of our public works. … I think privatizing the water’s like privatizing the fire department. … They’re not thinking 10 or 15 years down the road. I think they’re looking the next year or two years.”

He said he has concerns about the increase of rates in the coming years, adding that while the rates will go up regardless, as Aqua Ohio is a private company focused on profits. Mayor Terry Pugh and Safety and Service Director Jim Zucal have said the contract would specify the rate increase from 2020 to 2026 would be a monthly total $4.13, with increments of $1, $1.67, 71 cents and 75 cents. After 2026, there would be an increase of up to 9.9 percent, with increases of 3.75 percent for 2027, 2028, and 2029. However, other contenders in the mayoral race have voiced concerns that the company might seek further increases.

Opponents have also spoken with representatives from the Rural Community Assistance Partnership, which suggested low-interest loans might be available to repair and upgrade the system until the city is able to begin purchasing all its water from Belmont County.

“I have no problem paying rates. If the city comes up with a plan, obviously it’s going to cost money to repair the system, but once again I’m getting multiple figures,” Rice said, adding that it is difficult to form an idea of the situation with conflicting information.

“The citizens right now don’t know who’s telling the truth and who’s not. I’ve talked to councilmen on both sides, and it’s like Republicans and Democrats. They’re so far in one direction or the other, and the citizens are saying ‘listen, we just want water that’s safe, clean, and affordable.”

“If you want the rumors to stop, have public meetings and leave them open to the public.”

The day was cooler Thursday afternoon, and a few residents were willing to elaborate on the state and possible future of the water.

She also said the city’s population is now only a little more than 5,000 people, and unwise decisions could lead to the loss of city status.

“They’re going to lose people here in town. People who aren’t in love with being here are going to leave,” she said. “We probably aren’t going to be a (city) much longer. Rent’s going to go up, when people have rent and they include water in the rent, they’re going to have to get their money somehow.”

“I just don’t use the water at all. Haven’t done it for years. If you let that water sit on the counter, you put it in a bottle, and in the morning you see sediment in it. That water’s bad,” resident Rita Beck said.

“My thoughts are we should keep it in the city among the people of the town and not sell it, but I don’t know any more details, so I can’t say. I’d rather not do that because you don’t have control, and we need to have some control. But I think we let it go to long so now we’re in this pinch. I see it all around that our rates have increased, but our water has been bad for a long time. It’s not a sudden thing, and that’s where you’re disappointed. They let it go for so long. … If you don’t fix something when it needs fixed, you always pay more in the end.”

She said the city leaders seem to be reacting to the deterioration of the aging plant, which they allowed to degrade.

“You love the town. You trust everyone to have their best interests in mind when you vote them in, but I don’t know why it’s taken them so long,” she said.

While reporters spoke to more than a dozen residents at the Plaza West and on Main Street, at least five said they have not followed the debate or otherwise did not feel informed enough to comment.