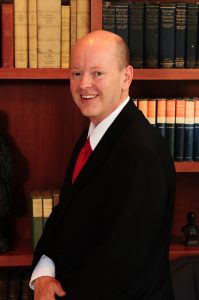 WHEELING — Former Wheeling University President Michael Mihalyo has filed legal action alleging he was misled about the school’s finances prior to taking his job, and that there is widespread fraud and cover-up among school officials when it comes to money matters.

The civil complaint filed Friday in Ohio County Circuit Court claims WU started the current academic year knowing it didn’t have the funds to complete the year. Mihalyo was suspended after submitting to the trustees of Wheeling University numerous budget outlooks showing the school would run out of money by December.

Mihalyo is suing the school, its board, the Diocese of Wheeling-Charleston and others. He seeks compensation for permanent physical injuries, past and future pain, suffering, mental anguish, past and future humiliation, embarrassment, indignity and shame, economic damages, diminished earning capacity, and future lost wages and attorney fees. The lawsuit states he was hospitalized for an undisclosed medical ailment during his tenure as president. He is represented by attorney Teresa Toriseva of Wheeling. Julia Cook, director of communications for the university, said it is “the practice university not to comment on personnel matters.”

Tim Bishop, spokesman for the Diocese said over the weekend the diocese could not comment on pending litigation.

Mihalyo served as provost and vice president of academic affairs at Rockville University in Illinois prior to taking over as president of then Wheeling Jesuit University on Aug. 13, 2018. He and Joseph Petrella, senior vice president, were placed on administrative leave Aug. 2. The university announced Monday afternoon it had selected Ginny Favede as its next president.

“Prior to (Mihalyo) ever being recruited for position of President, the financial condition of the University was horrific with actions of the … Board of Trustees, Wheeling Jesuit University, Diocese of Wheeling-Charleston, Rev. (James J.) Fleming and other board members, prior administrators, (creating) and perpetuated an (unsustainable) financial position for at least the last 10 years,” the complaint states.

Mihalyo made the following discoveries after assuming the job, according to the law suit:

∫ From 2014-18, the number of enrolled students at WU deceased 27 percent, while scholarship discount allowances increased 41.7 percent. During this time, tuition and fees were only covering about 55 percent of WU’s expenses.

The school was giving “unsustainable discounts” to students at this time — as high as 72 percent — “to give the appearance of a large student body and viable organization,” the complaint states.

∫ WU, the board of trustees and the diocese were informed in 2016 the school was “in poor financial condition.”

“Rather than take steps to improve the financial health of the university, (those involved) engaged in a calculated and systematic campaign of misappropriation, misdirection, and fraud to conceal the true financial state of this failing university,” the complaint states.

University officials frequently used money donated for scholarship purposes to cover the day-to-day operations at the school, and “engaged in other inappropriate financial transactions for the purpose of deceiving its regulatory agencies,” according to the lawsuit.

There were also a large number of funds unaccounted for in records, according to the report.

∫ On April 12, 2017, board of trustees members voted to transfer all university property to Diocesan Real Estate Inc. In exchange, the Diocese and Wheeling Hospital Inc. issued a combined $43.398 million to fund the redemption of university bonds, pay accrued interest on bonds, pay down the line of credit and provide operating expense funds of $2.731 million.

“This ‘bailout’ teems with conflicts of interest, self-dealing, and an overwhelming lack of transparency,” the complaint states.

Upon discovery of these alleged fraudulent activities, Mihalyo hired an outside accounting firm, FTI Consulting of Washington, D.C., to conduct an audit. The firm reported that over the past decade, WU engaged in “multiple inappropriate financial transactions jeopardizing and destroying the financial viability of the university,” the lawsuit states.

The board of trustees responded on March 8 by announcing it would terminate some staff, eliminate some academic programs and seek to renegotiate contracts with vendors because it would be unable to pay its bills and support the institution’s operational expenses.

Mihalyo, as president, “was unable to determine the true liquidity of the university as he received conflicting financial reports almost daily from university officials.” Despite this, he continued to submit updated budgets throughout the spring of summer “demonstrating the university would be insolvent by December 2019, although the actual date of insolvency would change frequently,” the complaint sates.

FTI Consulting was not retained to further investigate any missing funds, and its services were concluded, according to the lawsuit.

In early August, Mihaylo was suspended at WU just days before he was to speak before the West Virginia Higher Education Policy Commission regarding WU’s re-authorization for the upcoming school year.

“As retaliation for plaintiff’s investigation and self-reporting, the board banned him from campus,” the lawsuit states.

The court case has been assigned to Circuit Judge Michael Olejasz.