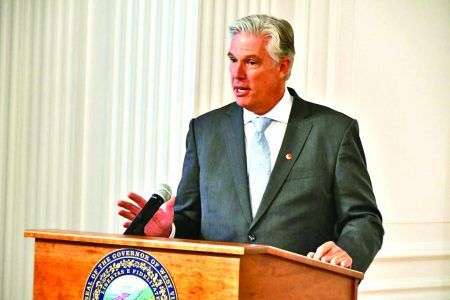 CHARLESTON — Six months after filing his precandidacy papers, traveling across the state to meet Republican voters and spending thousands on TV ads to get his name out, Woody Thrasher says it’s just the beginning of his primary campaign against Gov. Jim Justice.

“If you meet with enough people, you begin to get a real flavor for what the issues people have all,” Thrasher said. “I have gotten a good flavor of what people want and I think I will continue to do the same thing.”

Thrasher, the former secretary of the Department of Commerce and co-founder of the engineering firm The Thrasher Group, stopped in Charleston last week for a sit-down interview on how his campaign is going and the differences between himself, the governor and former Berkeley County delegate Mike Folk.

Since filing for office April 16, Thrasher’s campaign has been to 30 of the state’s 55 counties, 11 county GOP dinners, 19 county Republican Party executive committee meetings, 11 picnics and an ice cream social.

Thrasher has met with college Republicans at West Virginia University and Marshall University, volunteers with West Virginians for Life and faith-based coalitions.

All along the way, Thrasher and his campaign volunteers have marched in parades, participated in livestock fairs, talked to 3,500 voters in a tele-town hall, knocked on doors and put thousands of miles on his car.

Thrasher has to work hard. Justice, benefiting from being the incumbent governor, gets a lot of headlines, both for good and for ill.

Mike Folk, an outspoken former lawmaker, also is used to getting press. Thrasher’s only experience in politics before being tapped as Justice’s commerce secretary in 2017 was the occasional campaign donation.

While Thrasher was commerce secretary, he helped negotiate the $84 billion memorandum of understanding with China Energy, even traveling to China with President Donald Trump to secure the potential trade deal. Little has happened with that deal since Thrasher was pushed out in June 2018 after issues arose with the RISE West Virginia flood recovery program.

After a year and a half as commerce secretary and decades of engineering major and minor infrastructure and construction projects across West Virginia, Thrasher still had a name recognition problem.

Internal polling by the campaign in March had Thrasher at 5 percent compared to Justice at 58 percent. By August, those internal numbers rose to 23 percent for Thrasher, with Justice’s numbers dropping to 38 percent.

If there’s doubt about Thrasher’s internal numbers, the MetroNews West Virginia Poll released at the end of August put Justice at 53 percent, Thrasher at 19 percent, and Folk at 12 percent. Thrasher has campaigned hard to get his name out to Republican and unaffiliated voters, and the campaign has spent thousands on ads in West Virginia’s TV markets, more than $2,700 alone in September.

“I would say it was a very humbling experience back in March. I thought everybody knew me. Nobody knew me,” Thrasher said. “We had a strategy to get my name recognition up and I think that’s gone extremely well.”

When Thrasher and his team decided to run for governor, they didn’t blindly do it. They asked themselves two questions: is Justice vulnerable; and would Thrasher be electable? The answer to both questions, they decided, was yes.

“Those situations have not changed. They have only dramatically improved,” Thrasher said. “(Justice) is way more vulnerable than he was when we decided to run for reelection. Secondly, my ability to win this race has dramatically gone up. So, those two presuppositions that we had before in this race have only proven to be truer than they ever were before.”

The big thing for Thrasher is making sure voters can see the difference between him and Justice. Both are businessmen, but that might be the only similarity.

Justice inherited a business empire from his father, growing it from agriculture and mining to hospitality, buying the Greenbrier Resort a decade ago. Thrasher and his father started a small engineering consulting firm in the Clarksburg area in 1983, growing it to handle public service infrastructure projects, architectural services, and consulting. The Thrasher Group now has 11 offices in seven states and more than 700 employees.

“I think I’m a worker,” Thrasher said. “I think he’s a worker too. I just don’t think he works on state government. I think he works on his personal businesses, which quite frankly probably need more help than the State of West Virginia does, if that’s possible.”

Thrasher said Justice has not been a very good governor, choosing to react to problems instead of plan ahead. He accused the governor of using the last year of positive tax revenue numbers to pay for projects that, now with the downturn in tax collections, the state won’t be able to pay for in the future. The state now has a $29.8 million deficit in the first quarter, July through September, of fiscal year 2020.

“The governor touted he was going to put us on a rocket ship ride and just because of dumb luck, there was a blip in coal prices and there was a lot of oil and gas pipeline activity,” Thrasher said. “The coal prices have long since returned to where they were. That blip is over. Because of court filings, these pipelines are not going forward, which is a travesty for our state. But it also reflects that this governor did not really look down the road as a good businessperson.”

Both Justice and Thrasher have a similar problem, however. Both previously were Democrats, with Justice winning the 2016 election as a Democrat. Justice switched parties to Republican in August 2017 at the urging of President Donald Trump. Thrasher switched to Republican March 4 to challenge Justice.

While some county Republican executive committees have passed resolutions of no confidence in Justice’s leadership, Thrasher said his reception with the state’s Republican leaders and volunteers has been far more pleasant. When Thrasher is asked if he is a real Republican, he points to the party platform and points out Justice hasn’t followed it.

Thrasher points to Justice’s lack of support for Right to Work, allowing a worker to decide whether to contribute part of their wages to a union. Justice’s reluctant support for the charter school and other school choice provisions in the state Senate and House of Delegates’ version of the education omnibus bill is another sticking point for Thrasher.

But it’s Justice’s $500 million tax increase proposal during his first term that made it harder for Thrasher, as commerce secretary, to recruit new businesses.

“We are not in favor of tax increases,” Thrasher said. “As a former commerce secretary who tried to go out and recruit businesses to come to the State of West Virginia, we need to be rolling out a red carpet for those businesses. We’re not proposing the largest tax increase in the history of the state. I think when you look at the real fundamentals, I am way more Republican than this governor ever thought he would be.”

If Thrasher makes it past the primary and wins the general election in November 2020, he wants to continue to focus on education reform, loosening the control on county school systems by the Department of Education, but including more ways to hold schools accountable for poor performance standards. He also wants to develop the state’s vocational education training.

Thrasher also lists broadband improvement as an important infrastructure project to tackle. He believes expanding broadband into every corner of the state could allow regions struggling economically to thrive.

Another priority for Thrasher is instituting a new plan for maintaining state roads.

The key difference Thrasher cites between he and the governor is Thrasher will use his engineering background to look at problems and fix them, not wish the problems away.

“(Justice) does not live in the real world. This governor lives in a world where he wants things to be what they’re not,” Thrasher said. “I’m a realist and I’m pragmatic and I play the hand I’m dealt. I look at the situation, I look at the strong points, I look at the weak points, and then I adjust that hand and make sure we can go forward and hopefully win a few hands. And I think I have that ability dramatically more than him.”