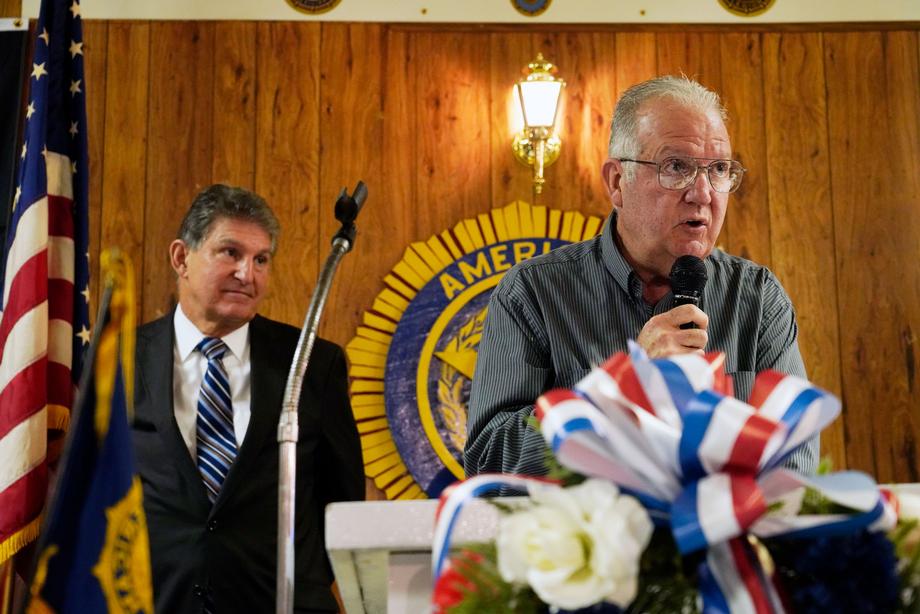 At Follansbee’s Veterans Day service Monday, Gary Guio of Weirton, right, thanked all involved in honoring his late uncle Joseph, who died soon after rescuing fellow sailors from a sinking destroyer during World War II. U.S. Sen. Joe Manchin, D-W.Va., left, presented the Navy and Marine Corps Commendation Medal, a citation from the Secretary of the Navy and a U.S. flag flown over the Capitol to the late sailor’s family.

FOLLANSBEE — The heroism of a Weirton man serving aboard a storm-tossed Naval vessel during World War II was remembered at the Veterans Day service held Monday at American Legion Post 45.

As guest speaker, U.S. Sen. Joe Manchin, D-W.Va., noted knowledge of the bravery of Navy Gunner’s Mate 3rd Class Joseph Guio Jr. would have been lost to time if not for the efforts of his family and others to uncover and memorialize the details of the 25-year-old sailor’s final actions.

“Making sure that people know, and generations to come never forget, is why we’re here today,” said Manchin.

Gary Guio said a search into the circumstances leading to his uncle’s death was sparked in 1993 by a conversation with his aunt, Stella Frengel, who wondered what exactly had happened to him.

Guio and others learned the sailor was serving aboard the U.S.S. Monoghan on Dec. 18, 1944, when it, two other destroyers and many other ships were severely damaged by the force of a tremendous typhoon in the Philippine Sea.

Mark Guio, Joseph’s great-nephew, said details of the incident were pieced together from newspaper articles, “Down to the Sea,” a book written by Bruce Henderson; a documentary aired as part of Fox News’ “War Stories with Oliver North;” and accounts from survivors. Among them was sailor Joseph McCrane, who said he and others were trapped in the gun shelter below deck and struggling to reach a hatch 20 feet above them when it opened and Guio pulled them through.

McCrane said after emerging, he was thrown from the ship by pounding waves and attempting to swim back when Guio called him to a life raft. He said about 13 sailors were in and around the raft, some clinging to its side because the storm kept forcing them out.

Another sailor — Evan Fenn, a former cowboy from Arizona — also has credited Guio with saving his life.

McCrane and others said they discovered Guio’s foot was partly torn off. Bleeding profusely, he told them, “I don’t think I’m going to make it.”

McCrane recalled holding the shivering crewmate close and Guio asking what he saw. When McCrane told him, the stars, Guio said he could see nothing. A short time later, he was dead.

McCrane said he held onto Guio a while longer before he and the others recited The Lord’s Prayer and buried him at sea.

According to news reports of the day, just six of 256 aboard the Monaghan returned home and were among 84 survivors of about 520 aboard ships caught in the typhoon.

Though he was known by shipmates as cheerful and joking, Guio wrote to a brother that he prayed each night for himself and his shipmates while urging his sibling not to share his concerns with his parents.

In one letter home, he wrote, “This is a very tough life but I’m willing to fight so this Damn War will end so I can return home to Luck (his girlfriend) and settle down.”

Another of Joseph’s nephews, Robert Guio of Follansbee, said he recalls being 5 or 6 years old when his uncle drove up on a motorcycle on the day before he left for the Navy.

“That was the very last time we as a family saw him,” he said.

A third nephew, Larry Guio of Weirton, was among many family members in attendance, some traveling from Georgia, Florida and Washington, D.C. to be there.

Manchin said as an employee of Weirton Steel, a major supplier of the war effort, Joseph Guio Jr. was exempt from military service but chose to enlist.

He said Guio was honored for his participation in several prior combat operations, including the Battle of Kwajalein and Bombardment of Saipan, but had not been recognized for the heroism that led to his death until 75 years later.

The senator said Anthony Paesano, former Follansbee mayor, aided the Guio family in bringing Joseph Guio’s sacrifice to his attention, which led to a resolution honoring him being entered into the Congressional Record.

Manchin and Navy Lt. Cmdr. Anthony Strother presented to Guio’s family the Navy and Marine Corps Commendation Medal, a citation from the Secretary of the Navy and a U.S. flag flown over the Capitol.

David Guio presented to Tom Mirabella, commander of the Follansbee American Legion Post, a patch worn by his great-uncle.

Also participating in the service were: vocalist Brent Kimball, Joel Sizemore of the Christian Assembly of Follansbee, who offered prayers; the Ohio Valley Veterans Memorial Squad, which delivered a military rifle salute; Follansbee Chamber of Commerce leaders Debbie Puskarich and Eric Fithyan, who placed wreaths; and Sophia Haught, who led the Pledge of Allegiance.