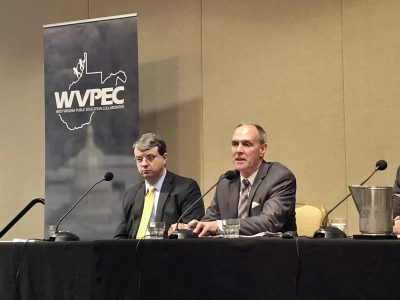 CHARLESTON — While the topic of education shouldn’t be a contentious one for the first time in two year, leaders in both the West Virginia Senate and House of Delegate laid out several educational goals Wednesday for the legislative session starting in January.

The theme of this year’s forum, sponsored by the West Virginia Public Education Collaborative (WVPEC) and The Hunt Institute, was “Connecting Education & the Future Workplace.” After two years of contentious fights over education policy and salaries, Carmichael is ready to see how the reform efforts implemented this summer will work.

“I’m looking forward to a calm year as it relates to education,” Carmichael said. That’s not to say that we won’t push the envelope as we have in the past, because we will not rest until we are first. There’s no reason this state can’t be first.”

In 2018, teachers and school service personnel went on strike over low pay and concerns over possible increases in health care coverage costs. Lawmakers passed a 5 percent average pay raise for teachers and school employees. In 2019, the Senate pushed an education reform package with new spending and increased funding for schools, but it also included provisions for charter schools and education savings accounts. After several starts and stops and a special session that lasted nearly seven months, lawmakers did pass a sweeping education reform bill that included a charter school pilot, allowing for three charters next school year and three more the year after that.

The state Board of Education recently put out a charter school policy for public comment for 60 days, and the three teacher and school service personnel unions are considering a lawsuit to block implementation of charter schools.

Frankly, we’ve had a lot of issues the last several years around education and we need to let that settle in and try to see the results of those Herculean efforts that we put forth over the past several years,” Carmichael said.

Last year, the Legislature passed Senate Bill 1 which pays the remaining amount for two-year community and technical college education once financial aid has been exhausted. According to the Higher Education Policy Commission, more than 2,000 students are in two-year programs today because of the bill, also called the West Virginia Invests grant program. All the panelists agreed that the next step is giving schools the option to start vocational-technical training for middle school students.

“Middle school is something that I’ve heard from a number of educators and from my superintendents from high school saying that they’d like to get those kids into Vo-Tech and not only the shop type things, but hands on activities,” said Ellington, who was appointed as House Education Committee chairman in July

“The things that I see us really pursuing and it relates to the workforce preparation, is driving these Vo-Tech classes down lower into the junior high levels,” Carmichael agreed. “We want you to have the flexibility to do it at your institutional level or at the local community level.”

Plymale, a former 12-year chairman of the Senate Education Committee who will be marking his 29th year in the Legislature next year, said the state needs to expand early childhood education to include children ages 3 and up. According to the National Institute for Early Education Research, West Virginia’s Pre-Kindergarten program is one of the best in the country, but Plymale wants the state to keep innovating in early childhood education.

“We’re a leader, but we’re now stagnant because we’re not moving further,” Plymale said. “One of those things that we need to be looking at is the three-year-olds. Once again, this is not something that’s mandated. It’s one that parents choose. If you want to address the opioid crisis and you want to look at Headstart, you put those kids in Headstart and they’re out of the situations.”

Hanshaw said lawmakers would once again look at how higher education is funded. The Legislature asked the HEPC two years ago to create a pilot program for a performance-based funding model for the state’s four-year colleges and universities. That pilot was put on hold after Gov. Jim Justice created a blue-ribbon panel to look at higher education. While some recommendations by that panel were implemented, much of its time was spent trying to dismantle the HEPC itself.

Other areas lawmakers plan to look at next year is occupational licensing reform, as well as a review of various education programs funded by the state to see what is working and what is not, continued expansion of high-speed broadband throughout the state, and better teacher preparation progams.