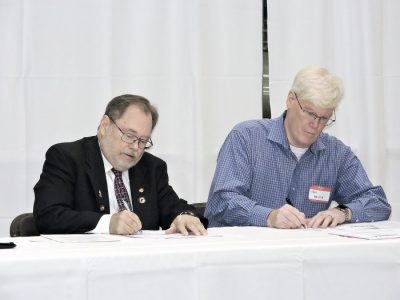 WEIRTON — With the stroke of a pen and a handshake, a new educational opportunity was launched last week for employees of Bidell Gas Compression’s facility in Weirton.

Tom Welch, vice president of manufacturing for Bidell, noted while the company’s employees have received training up to this point, the new apprenticeship program will be more focused on the skills used in the Weirton facility’s operations.

“It’s a more structured way to train our people for the skillsets they need,” Welch explained.

The welding apprenticeship program is registered with the U.S. Department of Labor, providing additional credentialing to those who complete the training.

Welch said the company will begin with a welding apprenticeship, and later expand to other skill areas, helping to build from existing programs which might not necessarily meet all of the needs of the oil and gas industry.

“This is going to help us bridge that gap,” Welch said.

Kerri Mulhern, director of economic and workforce development at West Virginia Northern Community College, announced the college will serve as the primary training provider for the apprenticeship program, to be held on-site at Bidell.

“They’ll be working with the tools and equipment they work with on a daily basis,” she said.

Ken Milnes, West Virginia state director for the U.S. Department of Labor, offered thanks to Bidell for the efforts to initiate the program, as well as to Weirton officials, the Business Development Corp. of the Northern Panhandle, and others who have been involved in getting the company established in the region.

Bill D’Alesio, chairman of the board for the BDC, said he sees the program as an opportunity to provide quality training for existing workers, and possibly attract more to the area, in turn building the local economy.

“We need the young people to stay here and to bring new people in,” D’Alesio said.