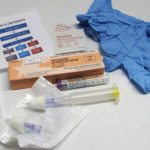 Hansard, also known as “Rico,” 33, pleaded guilty to one count of “Maintaining a Drug-involved Premises.” Hansard admitted to maintaining a place at 4335 Jacob St., Wheeling, to distribute cocaine, cocaine base, and heroin from April 2018 to September 2018 in Ohio County.

Hansard faces up to 20 years incarceration and a fine of up to $1,000,000. Under the Federal Sentencing Guidelines, the actual sentence imposed will be based upon the seriousness of the offenses and the prior criminal history, if any, of the defendant.