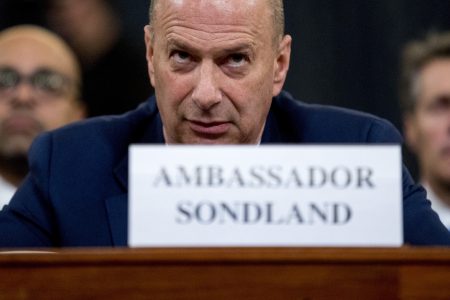 WASHINGTON (AP) — Gordan Sondland couldn’t always get President Donald Trump on the phone. Trump now says he barely knows the guy. But for a time, when they did talk, they spoke in naughty words and explicitly discussed pressuring Ukraine to announce investigations.

Was there a quid pro quo?

“Yes,” Sondland, the central figure in the House’s impeachment inquiry, told the world in his testimony Wednesday. What’s more, Sondland said repeatedly, “Everyone was in the loop.”

With that, the president’s “Gordon problem” became a bombshell that sprayed the president, Secretary of State Mike Pompeo, current and former national security leaders and Trump’s personal lawyer Rudy Giuliani amid the House’s drive to impeach the 45th president.

Sondland’s testimony in public and private left some questions unanswered, but he was crystal clear about one thing: If he’s going to be blamed for what happened in Ukraine, he’s not going quietly.

“It wasn’t a secret,” Sondland said of the president’s push to get Ukraine to announce it was investigating the 2016 U.S. election and a gas company linked to Joe Biden.

“The leadership at the State Department, the National Security Council and the White House were all informed about the Ukraine efforts.”

It was a notable case of transactional Washington relationships going bust under the pressure of scandal.

“I don’t know him very well. I have not spoken to him much. This is not a man I know well,” Trump told reporters at the White House. Sondland has served as ambassador since July 2018.

Trump did recall one thing, though, about Sondland: The Oregon hotelier supported other Republicans for president before he donated $1 million to Trump’s inaugural committee and became a “VVIP” for the events.

“He actually supported other candidates. Not me. He came in late,” Trump said, as Sondland’s testimony stretched across seven hours.

Back on Capitol Hill, Sondland confirmed that the two are not tight.

“It really depends on what you mean by ‘know well,'” Sondland said. “We are not close friends, no. We have a professional, cordial working relationship.”

Still true or not, Sondland revealed some of the ways their relationship worked amid Trump’s pressure campaign on Ukraine.

Trump, he noted, was sometimes in a “bad mood.” The president at times told him to “talk to Rudy” about Ukraine. Ultimately, Sondland told a State Department official, the president didn’t really care about Ukraine or the millions of dollars in military aid that were being withheld from the U.S. ally on the border with Russia. He cared about a discredited theory that Ukraine, and not Russia, meddled in the 2016 presidential election.

“Mr. Giuliani’s requests were a quid pro quo for arranging a White House visit for President Zelenskiy,” Sondland said. Knowing that resistance was futile, Sondland, Energy Secretary Rick Perry and then-special envoy to Ukraine Kurt Volker worked with Giuliani to pressure Ukraine “at the express direction of the president of the United States.”

On June 26, Sondland called Trump from his cell phone from a restaurant in Kyiv. According to the testimony of other witnesses, Sondland held the phone out for others to hear. Yes, he reassured Trump, the Ukrainian president was willing to do what the U.S. president asked.

“Putting it in Trump-speak by saying ‘he loves your ass, he’ll do whatever you want,’ meant that he would really work with us on a whole host of issues,” Sondland testified. At another point, Sondland said, “That’s how President Trump and I communicate, a lot of four-letter words; in this case three letter.”

It was one of as many as 20 times Sondland said he has spoken with Trump by telephone. Perhaps a half-dozen of those were about Ukraine, Sondland testified Wednesday. He and other witnesses said that they did not know at the time that Trump’s demand to investigate Ukrainian gas company Burisma also meant investigating Biden’s son Hunter, who sits on the board.

On one of those times, Sept. 9, Sondland said he picked up the phone and called Trump for what turned out to be a “very short, abrupt conversation.”

Sondland also was asked about an account in which presidential adviser Fiona Hill challenged him on his claim to be the one running Ukraine policy. When she asked who said so, he replied, “The president,” she testified in closed session.

“So, by extension, yes, if the national security adviser and the chief of staff approve your remit, it really is coming from the president,” Sondland said.

As Hill navigated Sondland’s moves, she at one point referred to the shadow Ukraine policy as Trump’s “Gordon problem,” according to a colleague.

“That’s what my wife calls me. Maybe they’re talking,” Sondland quipped during the hearing. “Should I be worried?”