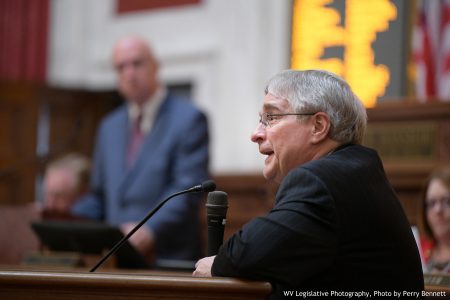 CHARLESTON — The administration has yet to decide on mid-year budget cuts despite drops in coal and natural gas severance tax revenue, lawmakers were told Monday.

Executive branch agencies have been working on contingency plans since September should a 4.6 percent mid-year budget cut of as much as $100 million is ordered by Gov. Jim Justice, Revenue Secretary Dave Hardy told the Legislature’s Joint Committee on Finance during November interim meetings at the Capitol. They’re holding off on the cuts until they see what tax collections for November and December will be, he said.

“There’s no definite plan on what type of budget cut, if any, needs to be made, but we are continuing daily to monitor our budget through November,” Hardy said. “Of course, December is a good marker as well, because December will be…halfway through the fiscal year. So that’s where we are today.”

The Department of Revenue at the end of October announced the state was making preparations for a possible mid-year $100 million cut to the general revenue budget. Year-to-date collections of $1.452 billion as of the end of October were $33 million less than the $1.485 billion revenue officials estimated.

Four months into fiscal year 2020 and state revenue has seen a 2 percent drop, with three out of the last four months coming in below estimates.

Mark Muchow, deputy secretary of the Department of Revenue, placed the blame for decreased revenue squarely on the shoulders of lower-than-expected severance tax collections for coal and natural gas.

Year-to-date severance tax collections of $75.9 million were 7 percent below projections.

“We’ve had some significant drops in international exports and we’re also being squeezed on the domestic side by very, very low energy prices, particularly natural gas, which is causing a significant decline in electric power generation from coal because gas competes with coal,” Muchow said.

Despite natural gas competes with coal, West Virginia isn’t benefiting much from revenues from natural gas production, which Muchow said are down 50 percent from last year. Muchow said this was due to the halting of construction work on the Atlantic Coast Pipeline and the Mountain Valley Pipeline, as well as how West Virginia’s natural gas is priced.

“It’s the natural gas revenues that are really down,” Muchow said. “We had progress impeded on some interstate pipelines and in the recent year or so we had a merger of local prices of natural gas at the pipeline compared to Henry Hub, the national standard.

“We’re beginning to separate again where there’s a separation where our prices are lower than Henry Hub. Now Henry Hub is down significantly as well because there’s just a flood of natural gas out there across the country keeping prices low, negatively affecting not only the gas industry but also the coal industry,” he said.

Muchow said the state will have to wait until the end of December to decide on any mid-year budget cuts due to how state holidays fall in November, which determine how taxes are collected.

“There are certain months of the year that I hate and one of those months is November,” Muchow said. “The reason why I don’t like November is because when I look at the calendar and I look at the holidays that state employees have, the last collection day for this month is the 27th. So, when the final numbers come in for November, they will look bad compared to last year because we’re missing the tail end of that month.

“Let’s wait until we get through December to see how we are in terms of our revenues for the year,” Muchow said.

How revenues will affect the general revenue budget for fiscal year 2021, which will be presented by Justice to the Legislature during the 2020 legislative session in January remains to be seen, Hardy said.

“As far as next year’s budget, I don’t think we’ve even gotten to the point of reaching a conclusion on whether we’re going to try to make those types of cuts in the budget that we’ll be proposing in January,” Hardy said.