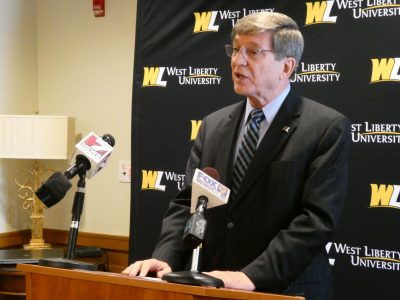 WEST LIBERTY — West Liberty University President Steven Greiner says his past four years at WLU were the best during his long career in higher education.

Greiner, 73, announced Tuesday he will retire effective June 30. He has agreed to stay longer if needed to assist with the transition, but will be 74 by then.

Greiner has worked in the field of higher education a total of 46 years, serving as president at WLU since January 2016.

Greiner told a gathering of faculty and staff Tuesday morning he was proud of the accomplishments at WLU during his tenure. Over the past four years, enrollment has increased and graduate programs have doubled in size.

Greiner’s tenure was marked by a management style that was student-focused, growth-oriented and financially responsible, he said. Campus improvements include the addition of two athletic facilities, the West Family Athletic Complex and the Belmont Savings Bank Indoor Practice Facility. The campus also saw the growth of campus housing with the renovation and update of residential halls and an increase in single dorm room space.

Shotwell Hall was updated and reopened for use as the International Student Center and the Office of Graduate Studies. Additional updates were completed across campus in the wireless network and the use of technology.

Most recently, Arnett Hall of Sciences was renovated to accommodate the growing zoo science program and more labs. Campbell Hall of Health Sciences saw the addition of a Speech and Hearing Clinic that is open to the public.

Greiner also has been a strong supporter of Hilltopper Athletics and assisted with the addition of two NCAA DII team sports, men’s soccer and women’s acrobatic and tumbling.

On the financial front, Greiner oversaw an emergence from a budget deficit that has resulted in a healthy financial index and continued balanced budgets.

As for what he will do in retirement, Greiner said, “I haven’t thought that far ahead yet.”

He and his wife, Nancy, have a coastal home in North Carolina.

Greiner holds an undergraduate degree in education from the University of Kentucky, a master’s degree from Western Kentucky University and a doctorate in higher education from Virginia Tech. He is a 1964 graduate of Weir High School.

A search committee for WLU’s 37th president is now being formed, and the names of those who will serve on the committee will be released shortly. After that, the WLU Board of Governors will launch a national search for Greiner’s replacement and a timeline will be released.