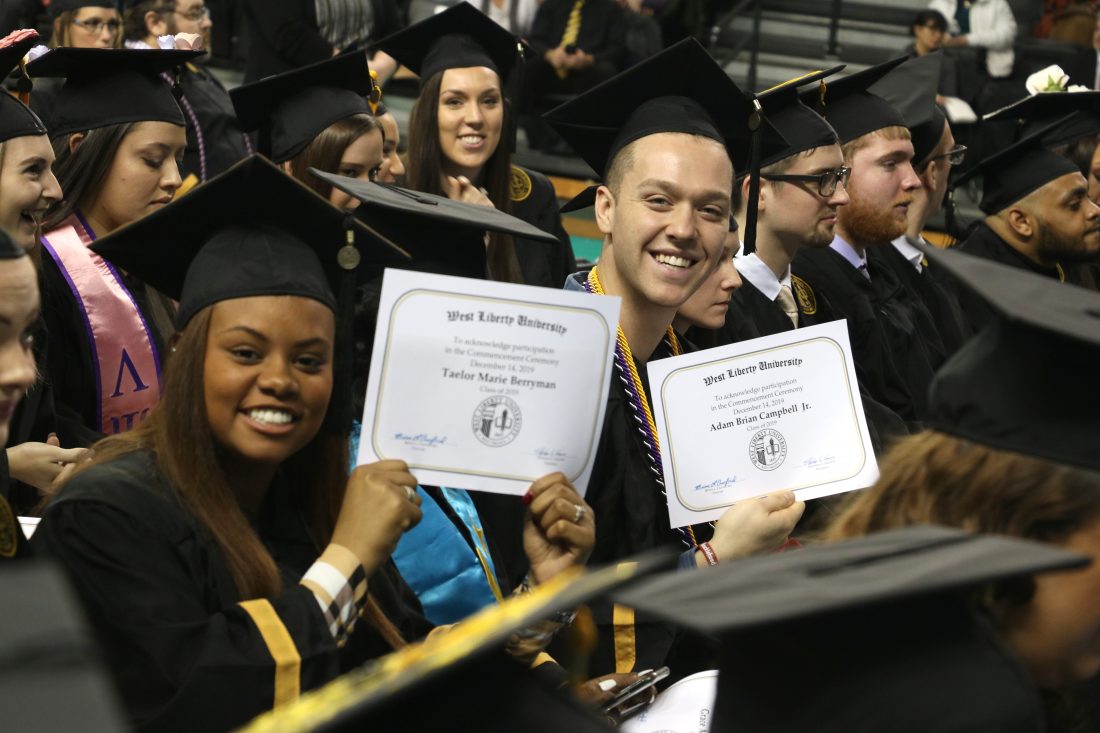 Photo provided West Liberty University students celebrate during their graduation ceremony on Saturday. From left are Taelor Berryman of Salem, W.Va., and Brian Campbell of Wheeling.

WEST LIBERTY — It may have been gloomy outside but inside the Academic Sports and Recreation Complex, it was a bright, happy day as West Liberty University held its fall commencement exercises.

President Stephen Greiner presided over the ceremony held Saturday. The university’s 161 graduates completed the necessary requirements during the fall or summer semester. Graduating student speaker was Robert Moore of Martins Ferry who earned a degree from the College of Arts and Communication. He began by thanking his wife and family for helping him to make it to this point. He then turned to thanking the teachers who guided him.

“When I think back on my time at West Liberty, the faculty here is world-class. You can’t get support like this anywhere else. I always knew I could go to the faculty for advice or to point me in the right direction,” he said.

Moore ended by wishing all his fellow graduates all the best of luck in finding and building a successful life.

Sarah Armstrong Tucker, interim chancellor of West Virginia’s Higher Education Policy Commission and chancellor of the Community and Technical College System, next was presented with an honorary Doctor of Humane Letters degree by Greiner, prior to delivering the commencement address.

Tucker, who grew up in Wheeling, began by thanking Greiner for his kindness and then celebrating the return to her hometown. She then turned to describing the importance of earning a college degree.

“A college education is unique in its ability to bring about truly transformative change – for the graduates who earn their degrees, and for the many who go on to benefit from their achievements. Getting to this point is nothing short of a triumph. It is the result of years of intense study and packed schedules – of prioritizing, clearing the decks, and saying to yourselves, ‘This is about my future. And I’m the only one with the power to make it great.'”

“I know this road wasn’t always easy-going. When you first arrived at West Liberty, maybe it was just finding your way around campus or learning the keys to time management. As you continued, your coursework got more rigorous, and the pressures associated with graduating began to build. But, take heart. You are here today – as newly minted college graduates – because you persevered.”

“First, before you rush headlong into anything, slow down and give deliberative thought to the choices you face – because, piece by piece, those choices will shape who you are. You are at a defining moment, and to be sure, you need to get on with your lives. But I caution you to take your time and be purposeful about what comes next. There’s no template, that’s for sure. And the noisiness of our world makes the business of becoming oneself a lifelong endeavor. So, set aside what others might think and want for you. Undoubtedly, they want the best. But, be sure you can find this answer in the choices you’re making: I’m doing it for me, because this is who I am and who I want to be. Second, demonstrate compassion and respect in all that you do. And finally, throughout your careers and your lives, stop at nothing in your search for new knowledge. Your world got bigger when you came here to West Liberty, and you prevailed – so keep making it bigger.

“Don’t be afraid to expand your horizons. Get that next degree. Take that online class. Sign up for professional development opportunities. Because if you keep going, keep pushing, you won’t be just bystanders of the future – you’ll be the builders of it.”

Tucker concluded by referencing a quote from American writer George Saunders: “The luminous part of you that exists beyond personality – your soul, if you will – is as bright and shining as any that has ever been. Bright as Shakespeare’s, bright as Gandhi’s, bright as Mother Teresa’s. Clear away everything that keeps you separate from this secret luminous place. Believe it exists, come to know it better, nurture it, share its fruits tirelessly.”

“Go forward, be purposeful, be kind, shine your light brightly.”

After Tucker’s conclusion, graduates were announced and presented with their degrees.

Commencement ceremony music was performed by the West Liberty University Concert Band under the direction of Gretchen Pohlman. Graduating student Abigail Wilson of Parkersburg sang the Alma Mater at the close of the ceremony. Wilson earned a degree in music performance.

The ceremony was televised live on WLU-TV 14 and streamed online on Facebook and at topperstation.com.

A reception for graduates, guests and families immediately followed the ceremony and was held in the College Union.