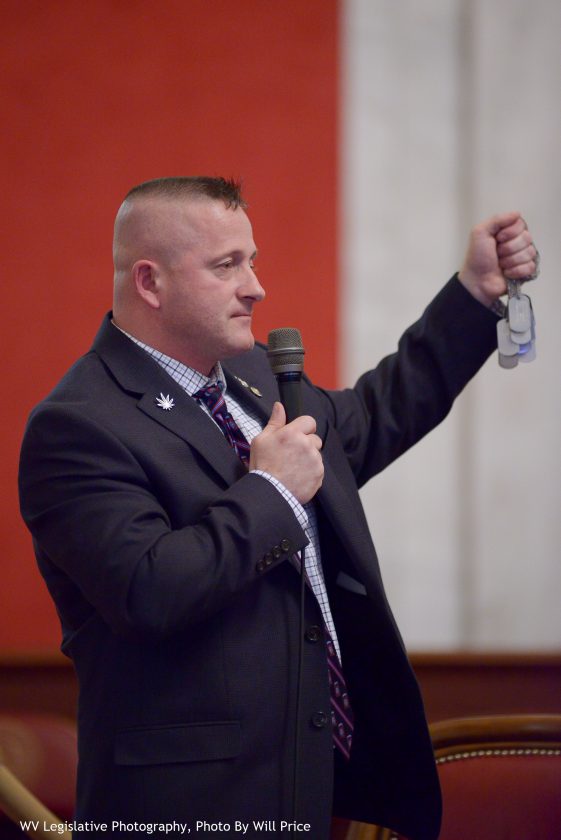 CHARLESTON — Nearly three years after its unorthodox passage in the West Virginia Legislature, the application period for medical cannabis growers, processors and dispensaries opens up this week.

But the specific details on how the medical cannabis program will work are still being worked out, causing delays.

According to the Bureau of Public Health in the West Virginia Department of Health and Human Resources, the Office of Medical Cannabis will start accepting online permit applications at 3 p.m. Thursday for those wishing to grow, process and dispense medical cannabis to patients with valid prescriptions.

Applicants can go to medcanwv.org to apply for the permits. The permit period is only open for 60 days.

The medical cannabis program is capped at up to 10 growers and processors and up to 100 dispensaries. While a person or a business can hold permits for all three permitting processes, no person can have more than 10 dispensary permits.

That’s just the cost of filling out the applications. The grower/processor permit fee is $50,000 and $10,000 for each dispensary location.

OUT OF THE WEEDS

The medical cannabis program has been moving at a slow crawl ever since Senate Bill 386 – the WV Medical Cannabis Act – was signed into law on April 19, 2017.

The bill, introduced by former Logan County state senator Richard Ojeda, passed the Senate in a 28-6 vote. Over in the House of Delegates, the heavily amended bill passed 76-24.

Cannabis, more commonly known as marijuana, is a schedule I drug under the federal Controlled Substances Act along with heroin and LSD. But over the last 20 years, a growing number of states have passed laws allowing for the medical and recreational use of cannabis.

The Medical Cannabis Act went into effect July 1, but the first patient identity cards are not expected to be available until 2021, according to Frame, who was selected to run the Office of Medical Cannabis in February 2018.

The biggest delay was due to banking issues raised in March 1, 2018 – nearly one year after passage – by the State Treasurer’s Office. In letters to state and legislative officials, Treasurer John Perdue warned decision makers that banks, subject to federal law, would be uncomfortable handling the fees, penalties and taxes associated with the Medical Cannabis Act.

After the bid process was restarted this summer, the State Treasurer’s Office awarded a contract to Element Federal Credit Union in August. According to a statement on the Office of Medical Cannabis’ website, they’re moving full speed ahead.

“Now that a banking solution has been secured, we expect multiple stages of program implementation to occur such as hiring additional staff, continuation of rules implementation, industry build out, registration of certifying providers, and registration of patients, etc.,” according to the website. “OMC is committed to a goal of less than two years for patients with a qualifying medical condition being able to procure quality-tested medical cannabis in West Virginia.”

Once the permit time period closes Feb. 18, DHHR estimates it could take up to six months before it starts approving permit applications.

DHHR is still waiting on approval for a series of legislative rules that will govern the specifics of how the Medical Cannabis Program. The five sets of rules bundles will be voted on by the Legislature during the next general session starting in January.

In the meantime, county governments are awaiting specific instructions from the state in regard to their role in the process. According to the act, written approval is required from the county health department before a permit is granted. The act also requires the Office of Medical Cannabis to develop inspection procedures.

Wood County Commission President Blair Couch is on the board of the Mid-Ohio Valley Health Department that serves Calhoun, Pleasants, Ritchie, Roane, Wirt and Wood counties. Couch said the department recently had a conversation with the state in regard to inspections of medical cannabis facilities, but lacked specifics.

Health department are still waiting for guidance from the state, he said.

“There’s a lot of gnashing of teeth at the health department level because we’re not educated enough to inspect,” Couch said. “Are we just inspecting for cleanliness? Do we have to be concerned about mold or other types of foreign agents in getting into the product?”

“The association itself hasn’t had any discussions that I’m aware of,” Woodrum said. “We have had people approach us about potentially growing here in the (Summers County) and we don’t have any issue with it…but as far as their requirements on inspections, I don’t believe that we’ve seen any guidance on that yet.”

“Any inspections performed by local health departments would be triggered by existing health department regulations that apply to any business,” Frame said. “OMC is working with local boards of health to develop guidelines regarding the approval of the location of medical cannabis businesses within their respective counties.”