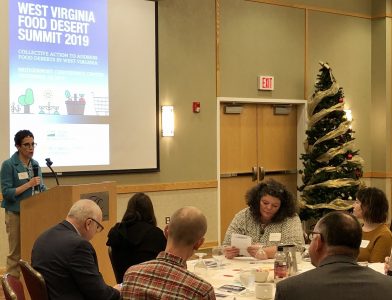 BRIDGEPORT, W.Va. — Community leaders, researchers and public policy experts met Tuesday in Bridgeport to find the oasis in the state’s food deserts — parts of the state with no or limited access to fresh food and groceries.

The 2019 West Virginia Food Desert Summit took place at the Bridgeport Conference Center in what was the third installment of a series of meetings put on by various agencies and schools at West Virginia University to develop strategies for helping increase access to food options in rural parts of the state.

The U.S. Department of Agriculture defines a food desert as an area lacking in accessible healthy food options measured by distance to one or more grocery stores, as well as a person’s ability to access those food options, transportation, and the average income of an area.

When looking at census tracts with populations without a vehicle or even farther (20 miles or more) from a grocery store, West Virginia ranked first in the nation.

The summit’s vision statement calls for a full grocery and supermarket experience for West Virginians that focuses on five A’s: accommodating, acceptable, available, accessible and affordable.

“Our mission statement today is to provide for a retail experience that accommodates the preferences of everyone in West Virginia, especially its low-wealth communities, with healthy food options that are affordable, available, acceptable, and accessible,” said Laurie Andress, an assistant professor with the WVU School of Public Health. “We’re using that statement to guide the way we are thinking about and having a conversation about food deserts in West Virginia.”

“Hunger is huge. We know that many families and many children go hungry in West Virginia,” Reed said. “We want to contribute to that solution and also to understand that when these basic needs aren’t being met, it’s very hard for the state to move forward in other ways. We talk a lot about economic development. We can’t move forward in terms of building a strong economic base if our children are going hungry.”

Summit attendees heard from several presenters who brought different perspectives of the food desert problem in West Virginia. Lynne Ryan, representing the Women, Infants and Children (WIC) program, said many WIC clients are mothers or pregnant women with no transportation. Some are reliant on public transportation where available, such as buses.

“It’s not easy to go grocery shopping on a bus. I don’t know how many of these families do it,” Ryan said.

Peter Butler with the WVU School of Design and Community Development said the most frequent issue his organization encounters is the food desert issue. Students with the school help communities redevelop former industrial sites and abandoned properties. The school is working in Pocahontas and Wyoming counties to help develop farmers’ markets, neighborhood gardens, and small-scale farms.

“We do have our boots on the ground in these communities,” Butler said. “We do hear the need and the desire for local food systems development.”

State Sen. Doug Facemire, D-Braxton, has more than 30 years of experience in the supermarket business, operating 11 stores until selling the company due to increased competition from Walmart. Facemire said a solution has to be found to the cost of transporting produce into rural areas with shrinking populations.

“Farmers’ markets are not going to take us where we need to go…growing is not the problem, selling is the problem if you want to make it in the long-term,” Facemire said. “For a small independent grocer to open up today…unless you know someone who wants to be a good guy and subsidize it, we just don’t have the population to do it.”

Andress said the feedback collected from this summit and the two previous installments will be put into a report, and a think tank will be created to continue working on the food access issue in the long term.