Maker Spaces Details Presented to Board 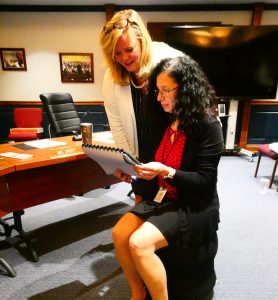 WHEELING — Students in Ohio County Schools soon will be asked to take their “Zenergy seats” at the start of classroom time in their school’s maker spaces.

Or maybe they will just decide to sit on a conventional chair in the space. Personal creativity appears to be the goal in the maker spaces being constructed at each school in the coming months, as students will be asked to create projects here to complement classroom instruction.

Ohio County Schools innovation coordinator JoJo Shay provided details to Ohio County Board of Education members Monday night as to what is being purchased for the maker spaces.

The budget for the maker space at each middle school will be $23,000, while $18,000 is being allocated to each elementary school. The difference is that laser cutters, priced at $5,000 each, will be placed in the middle schools.

The expected cost for the maker spaces at Wheeling Park High School, meanwhile, is “pending” as needs still are being determined, according to Shay.

The maker spaces are being paid for through general obligation funds and not by funds included in the $42.2 million school bond passed by voters in 2018.

Shay broke the cost of the project to board members Monday, outlining how the money will be spent:

The first $9,500 at each school will be spent on furniture. Included in this figure will be the purchase of “Zenergy seats,” stool with rounded tops intended to improve posture. These can be inflated or deflated based on the person’s preference, according to Shay. She demonstrated the seat during Monday’s meeting.

A “STEAM starter kit” to provide items associated with science, technology, engineering, art and math education will cost another $1,500.

In addition, interactive flat panel screen priced at $2,100 each will be placed in each room, according to Shay.

The first of the new maker spaces are being constructed at Ritchie, Bridge Street and Madison elementary schools, and are scheduled to be completed by spring.

Spaces at Steenrod, Warwood, West Liberty and Woodsdale elementary schools are set to be open in the fall, with one at Triadelphia Middle School expected in the spring of 2021.

Fall of 2021 would see maker spaces in place at the remaining schools — Bethlehem, Elm Grove and Middle Creek elementary schools and at Wheeling Middle School, according to the project schedule. The larger project at Wheeling Park High School would open last.

Board members also discussed entering in to negotiations with Project and Construction Services Inc. to oversee some aspects of the district’s bond-funded renovation projects. Representatives of the company were present at Monday’s meeting, and indicated they would be most helpful in establishing “budget adherence” oversight for the project.

The scope and cost of any potential services provided by PCS would be determined during the negotiations, school officials explained.

Board members also left the board room a 15-minute executive session during the meeting to discuss employee discipline. After the session, they voted to suspend Heather Dennison, a custodian at Wheeling Park High School, for one day. Reasons for such suspensions are considered personnel matters and aren’t discussed publicly by board members.

The board expects to meet next Monday for its last meeting of 2019, with the time and location of the meeting to be determined later this week.