STEVEN ALLEN ADAMS For the News-Register 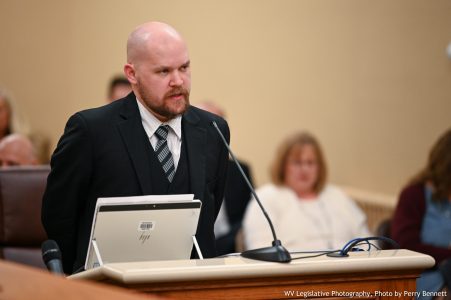 Photo by Perry Bennett W.Va. Legislative Services Jeremiah Samples, deputy secretary of the Department of Health and Human Resources, briefs lawmakers on the study the agency is doing on the I/DD waiver program.

CHARLESTON — Advocates for people with intellectual and developmental disabilities are holding state government accountable for a promise made nearly five years ago to restore funding for a waiver program, and lawmakers and candidates in 2020 are trying to get in front of the issue.

In 2015, former Gov. Earl Ray Tomblin and the Republican-led West Virginia Legislature slashed the Title IX Intellectual and Developmental Disabilities (I/DD) Waiver program, which allowed these individual to remain with family members instead of being placed in institutions.

Ever since, there has been a waitlist for I/DD waivers. As of October there are 1,084 individuals with 214 people added in the last 12 months. According to the WV Developmental Disabilities Council, the next person to come off the I/DD waiver list will have been there for more than four years, with 121 individuals leaving the list altogether due to the wait.

Advocates were told in 2015 that should money become available, more waiver slots would be opened up. But since 2017, there has been a surplus in the state Department of Health and Human Resources line item for Medicaid, partially due to cutting the I/DD waiver program. Money from the Medicaid surplus has instead been used to backfill the general revenue budget.

As of 2019 there is now $19.5 million available in Medicaid surplus. Combined with matching federal dollars, nearly $70 million could be available to help clear up the I/DD waiver wait list.

Families have called their lawmakers and the Governor’s Office, sent in petitions, lobbied their congressional representative, and have held rallies every year, including Monday night in front of the state Senate Chamber. Between 50 and 75 people showed up to let their voices be heard.

Tracy White, a parent advocate and a member of the Kanawha County Board of Education, has been leading the charge with other advocates and organizations to end the I/DD waiver waitlist. After years of being part of the fight, she thinks 2020 is the year things change for the better for parents and advocates.”

A number of lawmakers stood behind presenters at the rally. Even Democratic candidates for governor, attorney general, and secretary of state attended that rally.

“This is a little different than in the past,” White said. “We’ve, we’ve knocked on a lot of doors and made a lot of noise, but this time we have a lot of folks behind us and it’s a bipartisan effort. Both sides are coming out and loudly speaking on behalf of clearing this wait list.”

While the I/DD waiver issue has lingered over the years, it quickly gained momentum last week after Gov. Jim Justice released a statement Dec. 13 calling for DHHR to start a formal study to develop options for ending the waitlist. Justice said he wants the study done by Jan. 15, 2020, a week after the Jan. 8 start of the 2020 legislative session.

“Some of West Virginia’s most vulnerable men, women and children have been on the waitlist for more than four years,” Justice said. “We absolutely must find a way to eliminate the waitlist so that these West Virginians can get the help and support they deserve.”

During a meeting Dec. 17 of the Joint Committee on Government and Finance, DHHR deputy secretary Jeremiah Samples answered questions from lawmakers about the I/DD waiver issue.

“What we’ll be doing is putting together a breakdown of historical expenditure trends in the I/DD waiver program, specifically those trends since 2015 when some fairly significant changes were made,” Samples said. “We will also be putting together an analysis of waiver services in other states with the understanding that each state has nuanced waiver services that they have applied for.”

White said Justice spoke at the 2017 I/DD waiver rally, but the DHHR study is the most action they’ve seen from the governor on the issue.

“Governor Justice coming out and asking for that study is the furthest that we’ve ever gotten from any governor,” White said. “For him to come out and say ‘what about the wait list? Let’s do a study. Let me see those numbers. Let me see if the money’s there and we can clear these thousand people plus and get them the services that they need’ is huge.”

Samples said West Virginia was known in 2015 for having one of the most lucrative waiver programs in the nation, and that the changes made to the program in 2015 were meant to bring the program back on par with other states. According to Samples, the estimated costs per waiver in fiscal year 2015 was approximately $79,000. The cost went down in fiscal year 2018 to $69,000 per waiver.

“When you’re talking about a program that has roughly 4,500 people on it, that’s a substantial savings,” Samples said. “We had roughly $45 million in savings the first three years after implementing those changes.”

Justice is up for reelection in 2020, facing three Republican challengers in the May 12 primary. Kanawha County Commissioner Ben Salango, one of four Democratic candidates for governor, stood directly behind the podium during the rally. He put out a statement Dec. 15 calling for an end to the waitlist.

“Every year under Jim Justice’s administration, there has been a Medicaid surplus and yet none of the surplus has been used to clear this waitlist. These are West Virginia families who desperately need the help, and the Justice administration has continued to do nothing except offer words and false promises. It’s long past time for studies; it’s time for action.”

A number of lawmakers, both Republican and Democrat, have expressed support for ending the I/DD waiver list. Del. Dianna Graves, R-Kanawha, told rally attendees last week that when the House Republican Caucus met recently to discuss 2020 legislative priorities, ending the waitlist was one of those priorities.

“I can tell you clearing the waitlist made the priority list,” Graves said. “But we still need your voices. It doesn’t matter if one side of the House thinks this is important to act on it right way. We have to get (the Senate) and both parties to agree.”

State Sen. Glenn Jeffries, D-Putnam, said he hadn’t heard of the I/DD waiver issue when he first took office in 2017. Since then, he has directly written Justice urging him to act and remove the waitlist.

“We know there are children, adults, and families who are in desperate need with I/DD waiver assistance,” Jeffries said. “The wait has grown too long for too many years.”

For White, while she appreciates the sudden show of support for the I/DD waiver issue, she hopes that it is more than just words.

“It was a promise that was made back in 2015…and here we are in 2019 and it’s yet to happen,” White said. “We all are much more on board than we have been before as the importance of getting those names off the list and getting those families the services that they deserve has grown.”