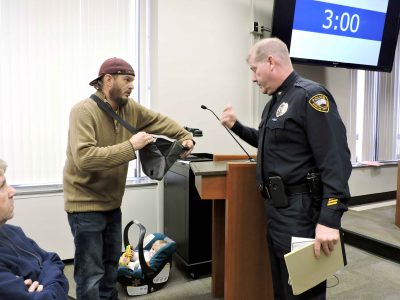 WHEELING — Voices were raised — and one man was ejected — at Tuesday’s Wheeling City Council meeting.

Much of the focus during the meeting was on the proposed public safety building. However, at the end of the meeting, city Police Chief Shawn Schwertfeger removed city resident Josh Riffle — who objected to how council regulates its meeting by only allowing three minutes for each member of the public to speak — when Riffle left the podium area and approached members of council while rifling through a bag.

Schwertfeger said late Tuesday afternoon that at that point, Riffle became a danger to council.

“This three minutes is illegal by state code,” Riffle said, citing section 6-9A-1 of the West Virginia State Code. “There’s plenty of space here (in the audience). Three minutes, uh-uh. You can’t do that, by the state rules. State trumps city, it’s that simple.”

Riffle also criticized the signup requirement to speak after the meeting.

“I’m not a doctor, or a lawyer, I’m a regular layperson, and I don’t need a lawyer to read (the law) for me,” he said. Riffle then left the podium, approaching council with a handful of papers to present.

“You serve us, and I’m sitting here telling you how to do that. The cops aren’t stopping me, because they understand that too,” he said, approaching council as Schwertfeger moved to escort him away.

As Riffle was escorted by police to gather his things and leave, council adjourned the meeting.

Prior to that issue, Wheeling resident and mayoral candidate Jerry Jacobs asked council during the meeting if the public would have a chance to comment on the proposal put forth by Councilman Dave Palmer, which would see the city pay 19th Street property owner Frank Calabrese $150,000 for his blighted building and also set aside another $195,000 for environmental remediation. The city would seek a federal brownsfield remediation grant to clean up the site, and if it’s granted, would give the money set aside for remediation to Calabrese.

Council did not allow any comment until the end of the meeting. At that time, Jacobs spent more than a minute and a half arguing with council member Wendy Scatterday, as both talked over each other on whether council understood and followed Robert’s Rules of Order, a manual of parliamentary procedure. His three-minute allotted time was reset as he started again.

“After hearing some of the things discussed here, I’m amazed at how people aren’t aware at the things going on here, though you all say, ‘transparency, transparency,'” Jacobs said. “Come May, I’m very hopeful that the citizens of Wheeling will come together and vote every single one of you out of office.”

Jacobs asked a series of questions regarding the property for the public safety building, but each question was met with silence from council. Vice Mayor Chad Thalman invited Jacobs to speak with council members after the meeting to discuss matters at greater length.

“I’m upset with the council because there’s been no discussion, so where are you guys discussing this? In back rooms, where we don’t have any chance?” he asked. 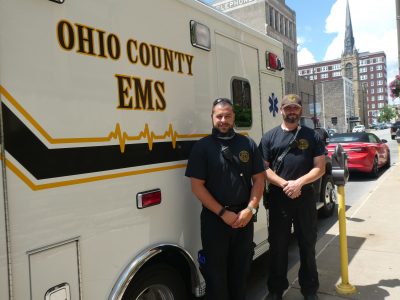