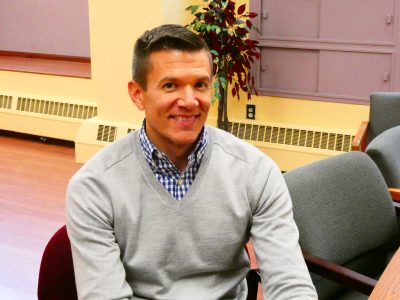 The upcoming session of the West Virginia Legislature begins Jan. 8, and Weld said his focus will be on bills pertaining to mental and behavioral health, and “mental health parity.”

“If you have a chronic condition like diabetes, you are not limited by the number of times you can go see a doctor,” said Weld, R-Brooke.

“But yet, many insurance plans limit the number of visits they will cover to go see a mental health provider for something like bi-polar depression or schizophrenia.

“So I think it is incumbent on us to make sure there is care not just for physical elements, but for mental and emotional ones as well.”

Weld said an emphasis also should be placed on having mental health care programs for school students who need them.

Last year, the legislature provided funds for the “Expanded School Mental Health Program” — a program that has been especially successful within Ohio County Schools, according to Weld.

There will be an effort this year to take the program to more school districts in the state.

He said he has been working with Crittenton Services in Wheeling to assist with another mental health program in Ohio County Schools.

“As children grow and develop, they may unfortunately be doing so in homes that don’t provide them the stability and care they need,” Weld said. “As a result, it disrupts their learning. It disrupts their emotional growth.

“And by helping our state’s youngest now, I believe strongly it will prevent them from having serious problems down the road — addiction, finding themselves in the criminal justice system, or just not being who they were meant to be as they grow up.”

Often insurance plans don’t allow for billing by health care professionals who provide treatment in the schools as opposed to their office, according to Weld. He plans to address this during the upcoming session.

Schools systems previously provided suicide prevention programs to students, but these no longer exist, according to Weld. He will be proposing legislation to reinstate them.

Often times, mental health issues also go hand-in-hand with mental health issues, he said. Weld is crafting legislation to establish “green alerts” — alerts similar to Amber alters that would tell the community when a veteran with mental issues is missing. These would take into account the factors leading to their disappearance.

“What we have seen here with the mental care facilities at (Ohio Valley Medical Center) closing bring these issues to light,” Weld said.