Bruce Out as President of EGCC 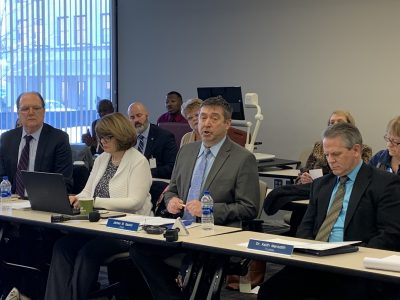 EGCC Chairman James Gasior, center, explains Wednesday the board of trustee’s rationale for terminating the contract of former President Jimmie Bruce. Also on hand for the announcement was Chief Financial Officer Michael Geoghegan, far left, who was appointed interim president.

YOUNGSTOWN — A “lack of leadership, particularly over the last five months” brought the curtain down on Jimmie Bruce’s four-and-a-half year tenure as president of Eastern Gateway Community College, Chairman of the Board James Gasior said Wednesday.

Gasior, addressing reporters after a two-hour closed-door meeting with the board of trustees and EGCC cabinet, said it was not an easy decision.

“It goes to (him) not being fully engaged with his cabinet, members of the board and what we consider our business partners” Gasior said. “He failed to respond to requests for information and wasn’t attending cabinet meetings. We’d been telling him for some time we needed to fill (critical) vacancies,” particularly the college’s crucial provost and marketing/public relations positions.

The resolution of termination, adopted unanimously, said only that “Whereas, Dr. Jimmie Bruce has lost the confidence of the board due to dereliction of duty and inappropriate management practices.”

“Now, therefore, be it resolved, that the board authorizes the chair to take the necessary steps to terminate the contract of Dr. Jimmie Bruce, in accordance with the terms of his employment agreement with Eastern Gateway Community College…”

Bruce, contacted later Wednesday afternoon, referred all questions to his attorney, Beverly Farlow of Dublin, Ohio-based Farlow & Associates, who said there was little to say at this point.

“The only comment we have is that we have not received any notification (from the) board regarding any action that’s going to be taken against Mr. Bruce,” Farlow said. “That’s just what we have to say for now.”

Gasior, though, said after the vote the action was “regrettable, but necessary, to restore confidence” in EGCC’s leadership “and to continue the growth we have seen on campus and online.”

“It’s very frustrating for us. What we saw (over the past five months) has been very different,” he said. “It wasn’t the same individual leading Eastern Gateway. We’ve had some very heart-to-heart discussions among the trustees and cabinet members. This was certainly not a direction we wanted to take, but a couple weeks ago it became clear to the trustees the confidence of the cabinet was not there. … You have to have confidence in your leader or it’s not going to work.”

Gina Augustine, co-leader of EGCC’s Education Association, said her membership will continue to do what they do best — “taking care of our students.”

“It is important that we do not allow the termination of Dr. Bruce’s contract to impact what we do in the classroom or other support areas of the college,” Augustine said. “We remain focused on our purpose in helping our students experience positive life change through education.”

Gasior, meanwhile, said the college will launch a nationwide search for Bruce’s successor, though he said that won’t preclude the board from looking in-house and in-state. In the meantime, he said Michael Geoghegan, EGCC’s chief financial officer, will serve as interim president.

“I want to make it very clear we have full confidence in Mike Geoghegan and the cabinet members,” Gasior added. “Despite the absence of Dr. Bruce, the staff has done an excellent job … moving programs forward. We believe there are great opportunities here — we’re looking at this as a blip in the road.”

Bruce and Jim Miller, EGCC’s vice president and chief of staff, had been on administrative leave since Jan. 7, though until now no one from the college has commented on the reasons.

While Bruce’s fate has been decided, Miller’s future is still in question. Gasior said he would remain on leave “subject to the resolution of an internal review of questionable expense-charging issues” on his college-issued procurement card.

Gasior said the college’s annual audit allegedly uncovered items charged to Miller’s procurement card “that we felt could be in violation of EGCC policy,” though neither he or Geoghegan would say what the charges in question involved. He said they’ll first “provide a more detailed summary, additional details to (Miller) and he’ll have a chance to address them.”

Geoghegan said the internal investigation is in the hands of Rea & Associates, the audit firm chosen by the state of Ohio. He said the audit is “pretty much concluded” and the report should be finished by the end of January.

“We’re just waiting for some direction from them,” he said. “There are some other institutions looking at it.”

In the meantime, he said the college has “closed down” all but one of the procurement cards that had been in use.

“We’d been looking at (doing) that anyway,” Geoghegan said. “With procurement cards (you) don’t have prior approval, you just incur the expense.”

Gasior also disputed a report in a Youngstown publication that the college is now headquartered in Youngstown.

In other developments, Gasior and Geoghegan said they don’t expect much fallout from the Legislature closing what critics had called a “loophole” in the state funding guidelines that was allowing EGCC’s meteoric spike in online enrollment to syphon State Share of Instruction dollars away from other community colleges to subsidize students who don’t even live in Ohio.

Spring enrollment is expected to “be over 26,000, just online,” Geoghegan said, with several thousand more on campus. “Our Ohio enrollment has been growing,” he added.

In remarks to state lawmakers in June, Bruce had characterized the SSI money as “an instructional subsidy” and said EGCC had used “every dollar to hire Ohio faculty and support staff to educate EGCC students,” Inside Higher Ed, a digital media company focused on higher education, reported at the time.

“State Share of Instruction (funding) has no impact on state financial aid,” she added. “It just goes to the college.” 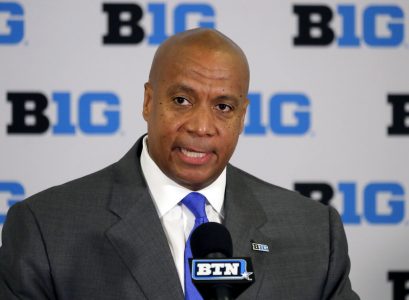 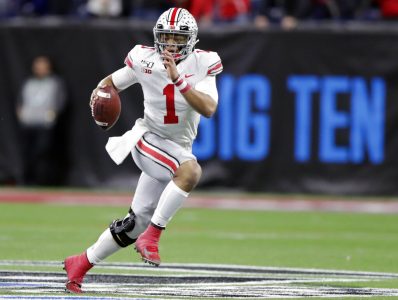