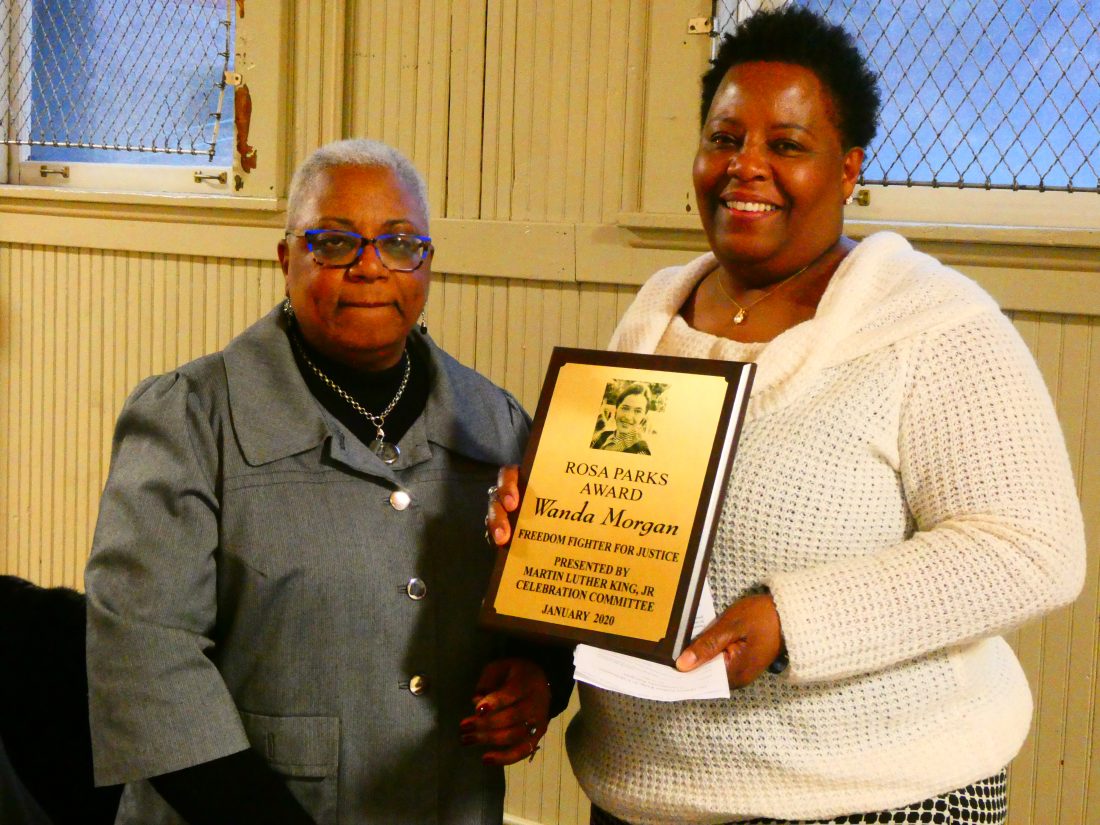 Marlene Midget, left, a member of the Martin Luther King Celebration Committee in Wheeling, presents the Rosa Parks Award to Wanda Morgan during the MLK Celebration community banquet Sunday at the Wheeling YWCA.

WHEELING — Ivin B. Lee once served as West Virginia’s first black female police chief, and she said during her lifetime she has learned there are three different types of people.

“Then there are those who stick their hands in their pockets and say, ‘What happened?” she said.

Lee served as the keynote speaker for the Martin Luther King Celebration community banquet Sunday at the Wheeling YWCA. Prior to the banquet, there was an MLK March down MLK Boulevard in Wheeling to the Fourth Street United Methodist Church, where there was an interfaith prayer service.

A common theme expressed during the local MLK events is that one must act on their dreams, or they are just hollow thoughts.

“I’ve heard ministers say this — each one of you have to be people who make things happen…,” Lee told those present at the banquet.

Lee said she is ready “to tackle” anybody or most any task. It’s a skill she said she passed on to her five children — Carlene, Carlett, Carla, Carl III and Carleton.

Son Carl Lee III learned so well he even went on to play cornerback for the Minnesota Vikings for 12 seasons.

“My ex-husband might tell you different, but I’m the one who taught him to tackle,” Lee said.

Now 81, Lee said she married at age 16 and had her first child at 18. She was a high school dropout.

Her career in law enforcement began when she was hired as a dispatcher for the Charleston Police Department. At the age of 35, she decided she wanted to take the test to become a police officer — and failed the first time. She would eventually pass, but the Fraternal Order of Police opposed her hiring as new hires were required to be between the ages of “18 to 35.”

The West Virginia Supreme Court would uphold her hiring, and Lee would go on to serve 26 years with the Charleston Police Department before retiring.

The mayor of nearby Dunbar contacted her and asked to become the police chief there. She said she first hesitated, realizing she would be in charge of a department consisting of all white males.

But she accepted, and became the first black woman police chief in West Virginia. She would later go on to serve as executive director of the West Virginia Human Rights Commission.

Honors also were presented during the MLK banquet Sunday.

Wanda Morgan was presented with the Rosa Parks award, an award “for rising up and showing leadership within the community.”

Duncan Waitts and Regina Martin were honored as recipients of the MLK Award, recognizing them for “making positive choices, setting a powerful example and demonstrating grassroots leadership for growth and change.”

Today — on the Martin Luther King Day holiday — there will be an MLK awards breakfast at the YWCA at 9 a.m., followed by special children’s programming for those ages 5-12 at 10:30 a.m.