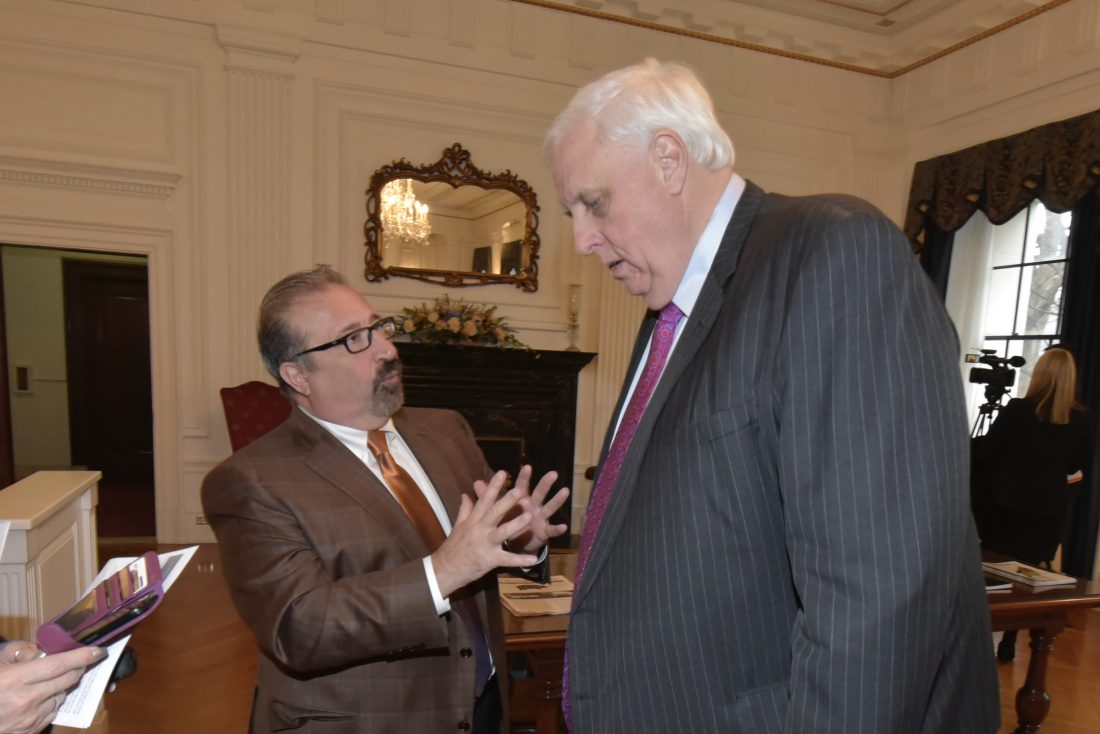 CHARLESTON — Larry Puccio, the former chairman of the West Virginia Democratic Party Executive Committee and a long-time adviser to Democratic campaigns, resigned as an at-large member of the state party committee in November shortly after donating to the campaign of Democrat-turned-Republican Gov. Jim Justice.

The only problem: members of the state executive committee just found out Tuesday.

Belinda Biafore, who became state party chairwoman after Puccio stepped down as chairman in 2015, confirmed Thursday that Puccio, who lobbies for the Justice-owned Greenbrier Resort resigned after the Nov. 16, state executive committee meeting.

“Larry Puccio’s resignation was verbally submitted to me after our latest executive committee meeting and will be addressed at the next one,” Biafore said. “His position is an at-large position allocated to previous party chairs and will be filled as such.”

A request for comment from Puccio was not returned.

The November resignation came after Puccio donated $2,800 to the Justice re-election campaign. The donation was made Oct. 24 at a fundraiser at the Wonder Bar, co-owned by Puccio, in Clarksburg.

According to the bylaws of the state executive committee, “the chair shall notify the members and officers of any vacancies and take proper action…for filling the same.” Reaching out to several members of the executive committee who declined to be identified, they confirmed that no notice went out about Puccio’s resignation until Tuesday.

A check of the state Democratic Party’s website Wednesday showed Puccio was still listed as a member. The West Virginia Secretary of State’s Office Friday said election officials had not been notified of Puccio’s vacancy or whether the vacancy had been filled.

A spokesperson for the state party said the executive committee member list will be updated once Puccio’s position on the committee is filled at the next meeting.

The Tuesday notice to committee members came after Selina Vickers, a Fayette County Democrat who regularly attends state party meetings and monitors party activity, sent an email to members of the state executive committee asking for Puccio’s resignation or for the executive committee to meet and remove Puccio from the committee.

“As we begin one of the most important elections of our time, it is critically important to have all members of our Democratic governing board dedicated to the success of the Democratic Party and its candidates and working diligently to run a fair and unbiased primary,” Selina said. “I respect the individual choice that Mr. Puccio made in terms of his personal support for a candidate as a freedom of speech. However, when Mr. Puccio accepted the at-large position on the executive committee, he in effect pledged to support West Virginia Democrats.”

Harvey Peyton, a Putnam County representative on the state executive Committee, also called on the state party to give Puccio the boot in an email sent Tuesday.

“As a duly elected member of the executive committee I join in Ms. Vickers’ call for the removal of Mr. Puccio as an at-large member of the committee,” Harvey said. “It is abhorrent of Mr. Puccio to offer financial aid and comfort to the turncoat, Trump-imitating Republican (Justice) now residing in Lewisburg and refusing to come to work.”

“The initial email concern was sent by someone who is not a member of the committee,” Biafore said Thursday in response to the Vickers email. “I have addressed the concerns of members of the committee regarding the situation. They have been made aware of his resignation, and we will conduct business at our next meeting.”

When Justice ran for governor in 2016, Puccio served was an adviser to the campaign. Puccio also served on Justice’s transition team after Justice won the election.

Justice later switched his party registration in 2017 from Democrat to Republican.

Puccio was an adviser and chief of staff to Joe Manchin over the last three decades, first for Manchin in the House of Delegates and Senate in the 1980s and 1990s, for his first run for governor in 1996, losing the Democratic primary to Charlotte Pritt. Puccio served as Manchin’s chief of staff in the Secretary of State’s Office and later when Manchin served as governor.

Puccio resigned from the Governor’s Office in 2010, starting a lobbying firm and representing multiple clients, including Justice. He also became state party chairman that same year.

In 2015, Puccio stepped down from the chairmanship to run the Country Roads PAC, a political action committee started by Manchin when he was a U.S. senator. He joined the Justice campaign in 2016.

According to the most recent filing with the State Ethics Commission, Puccio lobbies for two companies Justice owns: The Greenbrier Resort, now managed by Jill Justice; and Southern Coal Corp., one of several coal, timber, and agriculture companies managed by Jay Justice.