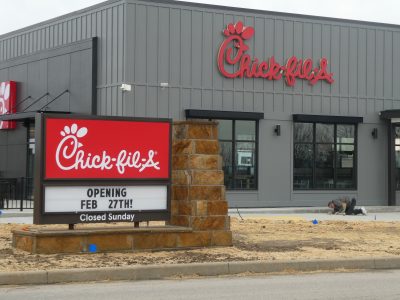 The Chick-Fil-A at The Highlands is set to open Feb. 27.

TRIADELPHIA — The Chick-Fil-A restaurant is set to open later this month at The Highlands, kicking off a string of anticipated openings there in the coming months.

A sign outside the Chick-Fil-A tells hungry passers-by it will open Feb. 27.

“Chick-Fil-A is a gigantic hit,” said Ohio County Commissioner Randy Wharton, also president of the County Development. “It’s been a while coming, but they’re definitely getting there. They are getting ready.”

Two other highly anticipated properties also are expected to open for business at The Highlands Sports Complex before summer.

The Highlands Sports Complex and the Menard’s superstore are nearing completion, and both should be ready for customers in late April or early May, according to Wharton.

The county has hired Sports Facilities Management LLC, of Clearwater, Florida to be responsible for operations and management of the sports complex.

SFA is presently running employment ads for the sports complex seeking a full-charge bookkeeper, a marketing coordinator, a sports director, a general manager and a director of business development.

The facility will have six basketball courts surrounding a central turf playing field. The field can be configured into four separate soccer fields if needed.

There also will be a zipline and a rock wall at the complex, and there is the potential for a splash pad to be placed there.

Wharton called Menards — at 200,000 square feet — “a mammoth store.” It is a home improvement superstore that even sells groceries.

“It’s opening at about the same time as the sports complex — probably sometime in late April or early May. There are quite a few working inside to get ready,” Wharton said.

“When it is done, it will generate a lot of traffic for The Highlands. It will bring a a good customer base. Everyone should be pleased.”