Marshall County Health Board Not Sold on Medical Marijuana 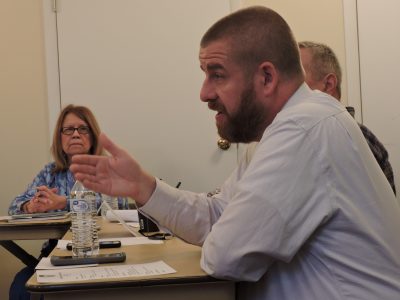 MOUNDSVILLE — Though West Virginia is taking stock of counties which may issue permits for medical marijuana grows and the establishment of dispensiaries, the Marshall County Board of Health isn’t sure if the county is ready to take that step.

He said the health board would need to vote to move forward with the process in order to be considered; by contrast, the voters of the county, through the county commission, would instead need to vote to disallow local production.

Frame said that if the board disallowed the action, their answer could be changed, but past a certain timeframe, the state may no longer be taking applications.

“Depending on when your answer may change, we may have already gone through the permitting process, and once those permits are issued, that’s it,” Frame said. “We have a very small number to issue, and it’s unlikely there will be any permits left to go back and give Marshall County after that process had taken place. If you change your decision, it may or may not change the permitting situation.”

Frame was unsure how long the window of opportunity to apply would remain open, estimating that it would wrap up in a matter of months, depending on the amount of interest.

He added that a negative vote from the board, or taking no action, as well as a public vote barring the local growing of marijuana would both be actions to stop the local process.

Marshall County Administrator Betsy Frohnapfel said Wednesday the commission had no comment on whether the county would take action. Commissioner Scott Varner was also present, but did not bring questions to the board.

Health Officer Dr. Andrew Schmidt warned the board that he would prefer to err on the side of caution, as the medical effects of marijuana were not well known, in his opinion.

“There’s still a lot of research to be done, a lot of monitoring of these products, that they’re still trying to work out,” Schmidt said. “There’s concerns — is the quality what they say it is? There’s impurities, and that’s certainly something we look at from a public health standpoint.”

Schmidt also questioned Frame as to whether dispensary workers would have access to the medical records of clients. Frame said that they would not.

“I don’t think it would be appropriate for a dispensary worker to have access to those materials,” Frame said.

Chairman Wes Howsare said he was concerned at the possibility that the federal government may start enforcing laws prohibiting the production, sale and possession of marijuana, a contradiction between federal and state laws. Board member James Stultz said that he understood the concerns, and added that while he believed enforcement was currently a low priority for the Department of Justice, that may change at any time.

“There was a DOJ memo … that (enforcement) would be low priority,” Stultz said. “Though it is illegal (federally), it would be low priority in their enforcement. However, last year, California raised the priority from low to high for dispensiaries — and that’s the last place I’d have figured they’d have problems. … The DOJ generally has said it was low-priority, though, but if they had a mind to, they could say, ‘We’ll enforce it now.'”

Chris Yeager of Kanawha County voiced his opinion that the county should open the doors to growing locally, especially through the lens of marijuana’s use as treatment for ailments, which Yeager said offered a break from the pharmaceutical industry.

“CBD, the element we’re dealing with now, has potential to heal the prefrontal cortex from opiate damage,” he said. “The pharmaceutical industry makes a lot of money off the backs of West Virginians, and I feel like that’s a big reason why this thing’s been thrown into the position it’s in now, having the health board make decisions and … that’s where it’s come from. I’ve spent the better part of a decade advocating for medical cannabis with our lawmakers…

“We can see it across the roll calls among the (West Virginia) House and Senate, and you can see that these people are directly tied to accepting money from pharmaceutical companies. If you want my personal opinion, that’s exactly why we haven’t seen this program roll out, that’s why West Virginia has led the nation in prescription drugs, and that’s why there’s been a slow rollout on this industry, and this program specifically.”

Board member Mike Ferro, also a member of the Marshall County Commission, said his time serving in the West Virginia House of Delegates from 2008 to 2018 has given him a different perspective on the issue.

“I’ve completely changed my mind on this since the time I’ve been in the Legislature,” Ferro said. “We had a delegate from Morgantown, Bill Flanigan, who got cancer and was taking the opioids and suffering from it, he lost weight. But his sister bought marijuana illegally, was putting it in brownies, and he was taking it illegally. He got off the pills, he gained his weight, he felt good, and I don’t think he ever took any opioids again.

“It completely changed my opinion on medical marijuana, from a medical standpoint. We’re talking about the permitting process, which is another story, but it has my approval. I’m for it. What we have now, what we’re doing now, it’s not working, I’ll tell you that.”

The board did not take action on the matter Wednesday morning.