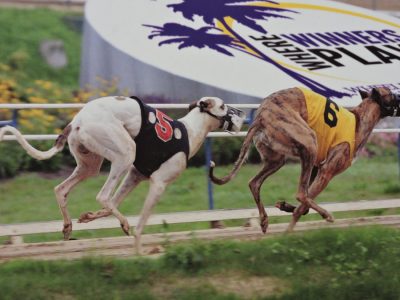 CHARLESTON — The West Virginia Greyhound Breeding Development Fund made it over the finish line Wednesday after a bill to eliminate the fund was rejected by the West Virginia Senate.

Senate Bill 285 was rejected Wednesday by a vote of 23 against and 11 in favor, with nine Republican senators voting with Senate Democrats to kill the bill. Voting against the measure pushed by Senate President Mitch Carmichael were Sens. Ryan Weld, R-Brooke; Bill Ihlenfeld, D-Ohio, Mike Maroney, R-Marshall, and Charles Clements, R-Wetzel.

Support came from senators such as Randy Smith, R-Tucker. With no interest in the state’s racing industry and as someone who does not support legalized gambling, Smith gave a brief floor speech in which he said he’s tired of taking away people’s jobs.

“As a state, we are always willing to take a job away from someone else, to take jobs away from someone else’s area. All we have to do is look at southern West Virginia to see how that’s worked,” he said. “I voted to end greyhound racing twice … in good conscience, I can’t vote today to do away with these people’s jobs.” 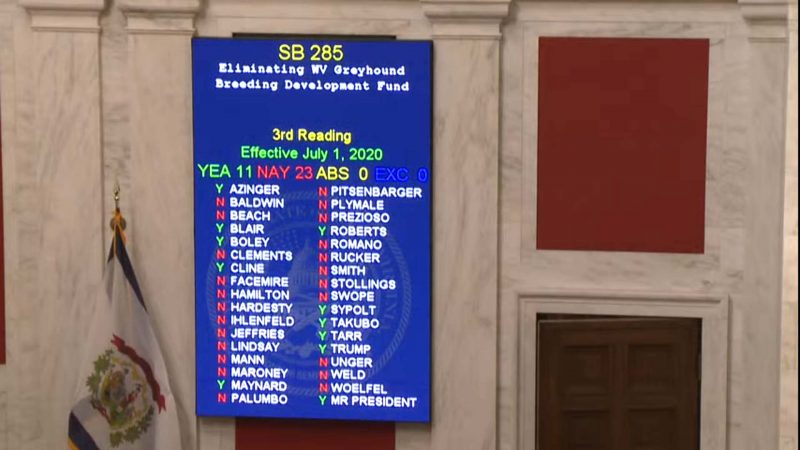 Weld also spoke against ending the fund. He provided numbers that contradicted a claim from Carmichael of one dog dying at the two racetracks every 10 days. Weld said information from the West Virginia Racing Commission shows that over the past five years, there have been 69 fatalities at the tracks — an average of about 14 per year, or one over 26 days.

“To say this is an industry in decline, that’s simply a misnomer,” Weld said.

Weld said GREY2K, an animal rights group based in Massachusetts and an advocate for ending greyhound racing, is using misinformation while doing nothing to help with greyhound adoption efforts in states that have ended racing, including Florida.

“They were involved in outlawing racing in Florida, then played no part in the adoption of the dogs in the industry afterward,” Weld said. “If this bill were to pass, they have no plan whatsoever.”

Ihlenfeld said he and Weld visited the dog kennel in Brooke County last week, and he came away impressed with how the animals are treated.

He also said, as other states have ended greyhound racing and there are only a handful of tracks left nationwide, West Virginia should be working to build the industry and capture the dog racing market.

“There aren’t many industries in our state that we control,” Ihlenfeld said. “We’re getting close to being the only game in town when it comes to this industry. Instead of kicking this to the curb, we ought to embrace it. We ought to modernize it. We ought to make it even better and allow even more people to send money to West Virginia.”

He also said Wheeling could not afford to lose greyhound racing with all the other challenges the city currently faces.

Carmichael, R-Jackson, was the lead sponsor of the bill. Leaving his place at the podium to speak, Carmichael said a vote against the bill was only delaying the inevitable.

“Whether we do it this year, next year or the year after, it is going to happen,” Carmichael said. “Greyhound racing is ending all across America. There’s only a few handful of states that even allow it legally to occur. And we’re the only state in America that subsidizes the activity.”

Carmichael said the $17.4 million generated from table games and video lottery machines by patrons of the casinos doesn’t belong to the casinos, but belongs to the state since it passes through the West Virginia Lottery.

“I hear a lot of talk about this is their money. It’s not their money,” Carmichael said. “I just proved it from yesterday. We just allocated excess lottery funds yesterday, over almost $30 million. So, it’s taxpayer money.”