Interstate 70 Through Ohio County : No One Can Drive 45

Police Stepping Up Enforcement of Speed Limit on I-70 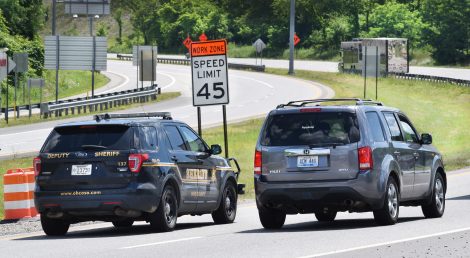 Photos by Scott McCloskey An Ohio County Sheriff’s Department cruiser travels through a construction zone on Interstate 70 near Elm Grove.

WHEELING — With all due respect to Sammy Hagar, drivers on Interstate 70 in Ohio County can’t even drive 45.

As traffic continues to increase on local highways with COVID-19 restrictions lifting and the approaching Fourth of July holiday, two local law enforcement agencies are working to slow motorists down to the 45 mph speed limit from the Ohio state line to The Highlands as construction crews continue working on the I-70 Bridges Project.

With 26 traffic stops initiated by Wheeling police officers and Ohio County sheriff’s deputies over the past six days between the I-70/470 split in Elm Grove and The Highlands exit, it is apparent that stretch of the interstate tends to be a hot spot for speeding and other traffic violations. Over the past week, the sheriff’s department made 19 stops on I-70, with 13 of those between the Elm Grove and The Highlands exits. During the same timeframe, the Wheeling Police Department made 15 stops on I-70, with 13 in the Elm Grove area, according to police records.

Both Ohio County Sheriff Tom Howard and Wheeling Police Lt. Josh Sanders said the number of speeding citations and other traffic violations have picked up significantly over the past month as more and more motorists are hitting the highways. While the I-70 work zones located between Elm Grove and Middle Creek present some traffic enforcement challenges for both departments as speed limits were lowered to 45 mph — and even 35 mph in some more constricted areas at the start of the project — both Howard and Sanders said their departments continue to monitor and perform traffic stops in an effort to keep area roads safer.

Howard said the increased traffic on that section of highway, along with the tight confines of the lanes, does present some challenges.

“With everybody being out now, the traffic has really picked back up. … Everybody wants to get out … and they’re in a hurry to get somewhere,” Howard said. “So we’re trying to run more patrols on Two-Mile Hill and that area as much as possible, because we’re still getting people (speeding) upwards of 90 mph. Two-Mile Hill is always a hot spot, because they’re coming down that hill and they just want to roll.”

He said the message he would like to get across to the general public is to slow down and be safe.

“Take your time … for the safety of everyone,” he added.

Over a five-minute period Thursday afternoon, a radar sign located near the bottom of the hill for traffic heading west showed speed readings above 60 mph nearly a dozen times. Howard is quick to point out that many of the traffic violations involve people from outside the area traveling through.

“They’re just flying through,” Howard said. “I-70 always picks up in the summer. It’s a main thoroughfare. And we’re getting a lot of wide loads now which makes it more dangerous.”

He said another challenge for deputies is finding safe areas between work zones to initiate traffic stops. Since they can’t initiate a traffic stop in extremely constricted area, deputies are forced to initiate stops well past the work zones.

Howard said despite the great number of speed limit signs posted throughout the I-70 Bridges Project work zones, many times motorists will comment that their navigation system displayed the 65 mph speed limit that was in effect prior to workzone speed limits being put in place. “People do not read signs. … We try to explain to them, ‘every sign you just passed says 45,'” he added.

Howard said not only are the reduced speed limits throughout the project area enforced continuously, the penalties and fines are doubled in those areas. He said the department’s deputies continue to perform traffic enforcement the best they can with “limited resources.” He said deputies also are being sent out-of-town on a regular basis to accommodate mental hygiene transports to hospitals around the state.

Sanders said Wheeling officers continue to be proactive with traffic enforcement in the city limits and different areas of the I-70 Bridges project — including the congested area near Elm Grove — in an attempt to get drivers to slow down.

He said since the stay-at-homes restrictions started to lift, the police department has experienced more “normal” traffic flows in the area. He said they expect to see additional motorists traveling through the area as vacation season picks up through the Fourth of July holiday.

“We have some highway safety efforts that we are going to continue … in order to prevent crashes and to save lives,” Sanders said. “We are going to continue to monitor all of the areas that remain high areas for crashes, and those areas include the Woodsdale and Fulton area where the detour occurs from I-70, as well as that little tiny stretch of road out there by mile marker 5 both east and westbound, where there seems to be a continued speeding issue.

“One of the major things for us is to make sure that we can do the enforcement safely,” Sanders commented, while pointing out that their officers do not initiate traffic stops in extremely constricted lanes due to safety issues. “They don’t want to make that stop where there’s nowhere to stop.

“We’ve encouraged officers to take part in some enforcement activity while they’re on their regular patrol beats in those areas. And that doesn’t include just I-70, that includes other high traffic areas of National Road and Elm Grove,” he added.

Sanders said many of the crashes on I-70 near Elm Grove are often related to motorists entering the highway from on-ramps.

“If we had a message for the general public, and this has been my message since this construction started — it is to slow down, back off and to hang-up. Tailgating, distracted driving and speeding are all the major reasons we see for crashes,” he said.