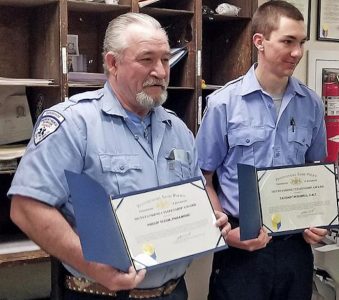 Marshall County resident Scott Ullom, left, and Zachary McDowell of Prosperity, Pa., are shown being honored by the Pennsylvania State Police last year in this file photo. The two paramedics recently received the prestigious Carnegie Medal for saving a motorist’s life after a fiery crash in on Interstate 79 near Waynesburg, Pa., in August 2018.

PITTSBURGH — A paramedic from Marshall County is being honored with the prestigious Carnegie Medal after he and another first responder pulled a man from a burning vehicle following a car accident in Pennsylvania nearly two years ago.

Scott Ullom of Dallas, W.Va. and fellow paramedic Zachary McDowell of Prosperity, Pa., received the award Monday and were recognized for their efforts to save the motorist’s life after the fiery crash on Interstate 79 near Waynesburg in August 2018.

“I thought it was joke or something,” Ullom said of when he learned about the award last week. “I was just doing my job. Sometimes you have to go above and beyond. But it’s a great honor.”

The Carnegie Medal is the highest honor for civilian heroism in the United States and Canada. According to the Carnegie Heroes Fund Commission in Pittsburgh that bestows the honor, 10,168 Carnegie Medals have been awarded since its inception in 1904. Fifteen people from 13 states received the award in this latest round, including three who died while performing the heroic act.

“When you’ve read other people who have died doing the same thing, that’s a real reality check on a person,” Ullom said. “Wow, this is something special.”

Ullom and McDowell, both paramedics with EMS Southwest in Greene County, arrived at the rollover crash on Aug. 3, 2018, and immediately began working to free the trapped driver, whose pants had caught fire while the vehicle’s dashboard began melting around him.

McDowell used a fire extinguisher trying to douse the flames, and both had to remove a futon stored in the rear of the SUV as Ullom reached the man and untangled his seatbelt. After a couple of minutes, they were able to pull the man through the rear tailgate and place him onto a stretcher before moving their ambulance away as the vehicle became engulfed in flames.

Both Ullom and McDowell are volunteer firefighters, but neither had the fire retardant clothing at the time. They were also honored last year by the Pennsylvania State Police.

Ullom, 61, has been with EMS Southwest in Waynesburg for 11 years. He’s a longtime Dallas volunteer firefighter and also works part-time at Wheeling Hospital.

“I still get up every day and go to work,” he said. “I don’t let anything go to my head. Just keep on keeping on.”

With the COVID-19 pandemic continuing, he’s not sure when the formal ceremony will be held. But he’s hopeful the award is a bright spot for other first responders who are struggling through the pandemic and recent protests.

“Keep your heads up and everything will get better,” Ullom said. “Hopefully the world gets back to normal soon.”