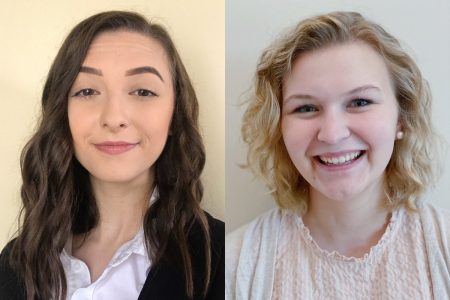 Abreanne Andlinger, left, a biology junior from Moundsville, and Kelcie Britton, an immunology and medical microbiology junior from Morgantown, will receive mentorship, training and the skills to become future scientific leaders and innovators under the Beckman Scholars Program.

Abreanne Andlinger, a biology junior from Moundsville, and Kelcie Britton, an immunology and medical microbiology junior from Morgantown, will also receive mentorship, training and the skills to become future scientific leaders and innovators under the Beckman Scholars Program.

Andlinger and Britton, both members of the Honors College, will spend their junior and senior years continuing their research pursuits: For Andlinger, it’s exploring neurological disorders using zebrafish. Britton will study ergot alkaloids, a fungi that can help treat Alzheimer’s and migraines.

“And it’s not just one gene contributing to these disorders. It’s many genes and environmental factors,” Andlinger said. “Hopefully once we make it through all of these genes ⁠– and there are a lot ⁠– we can understand how the dysfunction in these genes contributes to disorders, and then down the road, other researchers will be able to use this information to create treatments or gene therapies for people.”

Zebrafish are particularly useful for genetics research for several reasons: they are small in size, so they don’t take up a lot of space, they produce a large number of eggs in each spawning, they are genetically similar to humans, and, importantly, their embryos are transparent, allowing researchers to more easily observe gene expression.

“Ever since I was younger, I knew I loved science and wanted to do research and work in a lab,” Andlinger said. “This program will allow me to continue that passion.”

After graduating from WVU, Andlinger plans to pursue a Ph.D. in the genetics field. She hopes to be able to use her research to help others by pursuing cures and treatments for genetic diseases.

Britton also hopes to better understand and help pursue treatments for the betterment of humankind. She is continuing her research with Daniel Panaccione, Davis-Michael Professor, Division of Plant and Soil Sciences, with her project “Functional and Genetic Analysis of Esterase Genes Involved in Synthesis of Ergot Alkaloids.”

“Ergot alkaloids have been seen throughout history in causing these waves of hysteria and really strange bodily responses,” Britton said, noting their potential influence during the Salem witch trials as a popular example. However, more recently researchers have been exploring ergot alkaloids’ potential pharmaceutical implications, something Britton has great interest in.

“They’ve been seen to be really effective in notable treatments for Alzheimer’s and during labor to promote uterine contraction, as well as for migraines,” Britton said.

Britton said she has experienced a lot of growth as a researcher over the past year and a half in the laboratory.

“I found so much more value in what I’m learning in the classroom, connecting it to what I do in the lab.” Britton said. “It’s allowed me to look at everything I do from a different perspective.”

Britton’s future plans include attending medical school, with the goal of eventually working to research medical cures and the most effective ways to treat patients.

“After a three-year competitive process, 2020 is the first year for WVU’s Beckman Scholars Program,” said Michelle Richards-Babb, director of the WVU Office of Undergraduate Research. “As WVU’s first-ever Beckman Scholars, Abreanne and Kelcie were competitively selected for this premier opportunity. They represent the highest-level of undergraduate researchers at our institution and exemplify the impact of early engagement in research. Both began their research journey in their freshmen years and those experiences have fostered and further developed their interests in post-undergraduate research careers. The Beckman Scholars Program will allow for individualized mentoring geared to developing Abreanne and Kelcie into the nation’s future scientific leaders.”

In addition to working in the laboratory, Andlinger and Britton will mentor fellow students just starting out in research and will also present their own research at conferences and poster sessions. Britton recently presented her research at this spring’s WVU Virtual Spring Symposium.

Over the next three years, a total of six WVU undergraduate student researchers will have the opportunity to conduct funded research thanks to the Beckman Scholars Program, which will provide up to $156,000 in funding and leadership development through the Arnold and Mabel Beckman Foundation. Students can learn more about the program requirements on the WVU Beckman Scholars Program website.

WVU is among 12 top research universities across the United States selected for the 2020 Beckman Scholars Program by the Arnold and Mabel Beckman Foundation.

As a research-focused land-grant institution, WVU prioritizes fostering high-impact learning experiences for undergraduate student researchers, with students able to start research as early as their first semester through the Research Apprenticeship Program.

The Office of Undergraduate Research connects students and faculty to provide opportunities for students to engage in scholarly inquiry and creative endeavors. Students who are interested in research can visit the website or email undergradresearch@mail.wvu.edu.