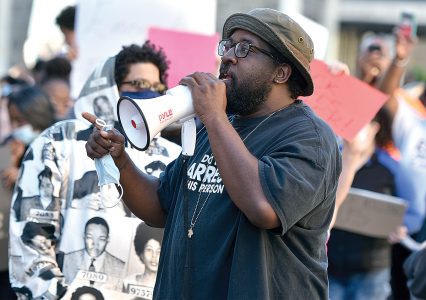 Ron Scott Jr., the cultural diversity and community outreach director for the YWCA in Wheeling, speaks during Sunday’s rally for justice in the death of George Floyd.

WHEELING — Cities across America have joined together to speak out against police brutality and racism after the murder of George Floyd, who died last month while being detained by police in Minneapolis. While it’s not the first time citizens have taken to the streets to protest, it’s the first time it’s happened during a global pandemic.

After footage of Floyd’s death went viral, protests aimed at raising awareness about police brutality and racism popped up in both the smallest and biggest towns in America. Those protests came after other groups began speaking out against stay-at-home orders across the country.

Ron Scott Jr., the cultural diversity and community outreach director for the YWCA in Wheeling, said he believes the pandemic changed how the protest looked and felt. Scott spoke at Sunday’s protest in Wheeling that attracted hundreds of people.

“There were several people who told me that (COVID-19) was one of the main reasons they couldn’t come,” Scott said. “Most folks I saw there had masks and a lot of them were worried about hand sanitizer. There was a guy walking around with hand sanitizer giving people a couple of squirts if they needed it. There were people with plastic bags, handing out masks, just to make sure that people were still staying safe during the whole thing.”

Scott said it’s up to the organizers of the protest to never lose sight of keeping the crowds safe and to remind them of social distancing. Scott suggested reminding people in between speakers not to forget to wear masks and stick to CDC guidelines.

“We shouldn’t lose sight of people’s safety when it comes to health,” he said. “It’s just something that demands immediate attention, regardless of what’s going on pandemic-wise because it’s almost like if a loved one was hurt.”

Azja Butler, a college student and protest organizer in Lawrence, Kan., said many of the protests regarding the stay-at-home orders were not being policed in the same way the protests in honor of the Black Lives Matter movement were being policed.

In the wake of all the gatherings, the threat of spreading COVID-19 looms over protesters as they amass in large groups. In some cities, leaders advised protesters to be mindful that a pandemic is still going on. Atlanta mayor Keisha Lance Bottoms, for instance, told those who protested to be tested for COVID-19, while at a press conference, New York governor Andrew Cuomo reminded everyone that those gathering could potentially be infecting hundreds of people.

In Lawrence, Butler said she and other protesters did not want to contribute to the spread of the coronavirus and safety was the main concern when more than 1,000 people gathered to march..

“We wanted to keep everyone safe in their interactions with other people, whether that be police or counter-protesters, but also from COVID-19 because we still are in a pandemic,” Butler said. “We really didn’t want to contribute to that, but we also wanted to let people know that obviously COVID-19 isn’t stopping these murders by police. We wanted to demonstrate that COVID-19 also can’t prevent or stop us from being a unit or being a community.”

Butler said the protest in Lawrence had several safety stations along the marching route with volunteers and volunteer nurses. She added that volunteers purchased masks and collected donations so everyone attending could have a mask.

“I would say almost over 90 percent of the participants outside were wearing masks or some sort of facial coverings to sort of keeping everyone around them safe, which was really nice,” she said. “We also recognize that there are people in the community that are either immunocompromised or people that they live with or care about are immunocompromised. We wanted to make sure that there are ways they can also participate in the movement so we had several people who set up accounts so people could donate money.”

Butler said they used the funds for purchasing masks, paying the protest’s speakers and to donate to other organizations.

“We were also able to use a lot of those funds to pay a lot of the black men and women who participated in speaking at (the) march for their labor,” she said.“I think it’s really important to sort of recognize the sort of risks and the courage that it takes for black people to speak out in situations where they don’t always feel safe.”

Mazzy Martinez, a student and organizer in Lawrence, said the Kansas protest was powerful and she was thankful there was no violence. Martinez said while COVID-19 is a concern, “it isn’t going to keep me or other organizers inside.”

“It’s important that we still go out and fight,” she continued. “We’ll do this until there’s change and until police are held accountable for their actions across the country.”

Butler said the largest threat to the protesters during the march were two civilians who tried to drive their vehicles into protesters.

“We had several volunteers offer to drive their cars around us as we marched so we were able to remain safe,” Butler said. “All I have to say to those individuals is your tactics aren’t going to scare us off. There are people who do care about black life, in my life in particular, and the fight doesn’t stop here. We have a long summer and clearly last night proved that we can do things like this and still stay safe from COVID.”

Nikki Johnson, a protest organizer in Washington, Pa., said most people arrived at her local protest with facial coverings but as protestors marched, many took them off.

“I’m not saying that COVID is not serious right now and that it’s not taking lives,” she said, “but there are innocent black men and women being murdered, not just by police but citizens for no reason.”

Martinez said she encourages others to turn their efforts to help protests in larger cities by donating supplies or to community bail funds.

Scott, meanwhile, noted that he believes speaking out and protesting must happen in order to keep everyone from being desensitized to horrible things.

“These protests have to happen,” he concluded, “or we will begin to normalize the deaths by police brutality.”