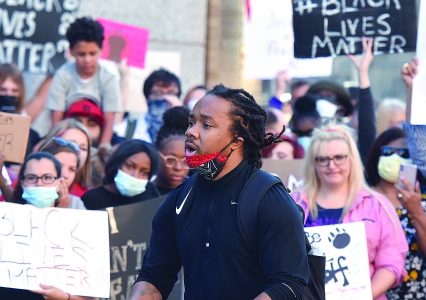 Wheeling native Geremy Paige speaks to the crowd of protestors during Sunday’s rally for justice in the death of George Floyd.

WHEELING — Several hundred local residents came out Sunday evening to peacefully protest in solidarity with others across the nation following the death of George Floyd.

Floyd’s death last week while being handcuffed by Minneapolis police sparked a wave of outrage, leading to mass protests in dozens of states, and subsequent rioting in several cities. Organized protests have been held in recent days in cities such as Pittsburgh and Columbus, leading to police crackdowns and curfews.

Sunday evening’s event in Wheeling surpassed 100 demonstrators by 6 p.m., and hundreds more by the end at 7 p.m. Following the official end of the event, dozens continued to demonstrate by marching through Wheeling down Market Street and then onto Main Street.

Demonstrators led chants of “Black Lives Matter” and urged one another to say Floyd’s name, as well as calls for political action, urging for the community to band together and vote out President Donald Trump. On several occasions, demonstrators also called for Wheeling Mayor Glenn Elliott — who was in attendance for the early part of the event — to speak, but he did not do so.

Community leader Ron Scott Jr., who, among other things, serves as director of Cultural Diversity Community Outreach at the Wheeling YWCA, said the event was a smash success, especially considering the lack of official organization.

“I’m inspired, more than anything,” Scott said. “I’m excited that this many people came out, mainly just some folks who were just concerned. This isn’t like an organization that decided they were going to jump in. These are concerned citizens who made this happen.”

Within the last month, white nationalist groups had placed stickers at numerous points around town, drawing condemnation from Elliott and concerted efforts from locals to destroy the stickers. Scott said the demonstration was a way for the community to push back against the hate groups. He added that he had expected counter-protest groups to show up, but no notable resistance was seen Sunday.

“Especially since we don’t have much resistance, nobody to really push in the opposition, this is a way for us to say, ‘OK, this is where we should be.'”

Scott said Elliott’s presence, without taking center stage, was a strong symbol that city council was listening to the peoples’ plight.

“The mayor’s presence is enough. A lot of the crowd is calling for him to speak, but I think the mayor needs to be here to listen. More stuff will be accomplished by just having an open ear than anything,” he said.

One local, Sheila McGee, thought the community pride demonstrated in the event was phenomenal, but hoped that politicians wouldn’t use the demonstration as a means to gain political clout.

“I think people coming together of all races (is wonderful),” she said. “I am upset that the mayor was right there, taking it all in, the chief of police (Shawn Schwertfeger) was here, and people called for them to speak, and they never did. … Word to the wise — when you come out to see a crowd, are you counting how many votes you’re going to get? If you want the votes, you come and speak.”

One man who spoke, Greg Roby of Martins Ferry, pointed to one protester’s sign — “End white silence,” carried by a white man — and expounded on the need for community members of all races to band together and enforce social equality, including needing to empathize with others and unlearn bigotry and stubbornness.