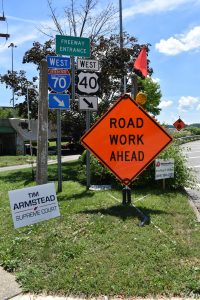 Aside from road construction and directional signs, no other signs will be permitted in public rights of way in the city of Wheeling beginning Wednesday. Prohibited signs include political signs and advertisements for businesses. The new restrictions do not apply to signs posted on private properties.

WHEELING — The city of Wheeling’s new ordinance prohibiting signs and outdoor advertisements in public rights of way goes into effect this week, and city officials are advising anyone with signs posted in these areas to retrieve them before they are removed by city crews.

The new rule is set to begin Wednesday when the month of July begins. City leaders had taken action earlier this year to pass the new ordinance, but because the new measure was being taken so close to the primary election, officials chose to have the ordinance go into effect on July 1 after the election. Officials noted that candidates running in the primary most likely had purchased and even erected their political signs before the discussion about the new rule was even discussed.

However, the new rule will be in effect moving forward, and political signs will not be permitted in public rights of way during the coming presidential election in November. The rule pertains to all signs on public property, including political signs, advertisements, notices for special events, postings for garage sales and all other temporary signs.

Earlier this year, the Wheeling Planning Commission made a recommendation to city council to ban all signs in public rights of way. Officials noted that the measure would enhance the aesthetic appeal of commercial and residential areas in the city limits and improve public safety since certain areas of the city had become cluttered with signs that were often left in place for months and forgotten, creating distractions and obstructing views at intersections.

The primary reason city leaders moved forward with the new sign ordinance was because of a 2015 U.S. Supreme Court Ruling that deemed content-based regulations on signs to be unconstitutional, noting that any such rule would violate the right to free speech.

Most cities, like Wheeling, already had an ordinance in place that address issues about signs in the public rights of way, but language in the ordinances pertained to regulations regarding the types of messages or purpose of the signs or advertisement.

Tom Connelly, assistant director of Economic & Community Development for the city of Wheeling, said the city’s old sign ordinance had been content-based, and the city stopped enforcing the ordinance in recent years because of the Supreme Court ruling. This led to the subsequent sign clutter and need for another course of action.

In order for municipalities to come into compliance with the high court ruling, it boiled down to adjusting the language about sign regulations to allow “all or nothing” moving forward.

“The decision ultimately came down to whether the city allowed all signs or no signs in the right of way, and having no signs best met the intent and purpose of the sign code,” Connelly said.

Officials noted that the only exception to the ordinance will be for businesses using one sidewalk sign placed directly outside of their establishment.

Connelly stressed that the new sign regulations only apply to public rights of way and do not affect signs posted on private property.

As the new ordinance is set to go into effect this week, many of the problem areas of sign clutter in Wheeling have already been cleaned up. This week, Connelly noted that since the onset of the COVID-19 pandemic, fewer signs have been appearing around the city.

“Because fairs, festivals and other special events are not going on because of COVID-19, we’re not seeing nearly as many signs as we had been seeing in the past,” he said. “There just aren’t as many things to advertise, apparently. But all signs found a public right of way as of July 1 will be subject to removal.”

Any signs removed by city crews will be held at the Wheeling Operations Center at 10 Hunter Ave. Anyone wishing to claim their removed sign will have one week after its removal to do so before the city disposes of it.