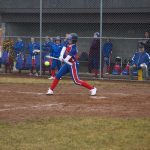 She proved to be too tough for the Golden Bears, overcoming an early line drive to the head to put together five solid innings and earn the win while her teammates built a lead that ended up being more than enough.

With the Patriots (3-3) ahead 2-0, Alexa Andrews — the third Oak Glen batter to come to the plate — hit a hard line drive right at Long, striking her in the head, knocking off her mask. She immediately told the training staffs rushing to her she was OK, and, after being evaluated, stayed in the game to record six strikeouts while walking two and allowing two runs.

“Wow, what a shot,” Durkin said of the liner off Long’s mask. “That was one of the worst hits I’ve ever seen, but she got right back in there. She didn’t bat an eye after getting hit. She is a tough girl. She pitched a heck of a game again. Once we got a lead, she kept them off guard.

“Kacy is the kind of girl you want to have on your team. She is a great kid and a great competitor.”

The Golden Bears (3-4) out-hit the Patriots 11-5 in the game, including seven off of Long, but were plagued by runners left on base, struggling to get clutch hits.

“They got an early lead,” Oak Glen coach Sherrie Garner said. “Our girls were able to chip back in it, but not enough. We did get some hits, they just weren’t put together. We left some runners on. We’ve got to figure out ways to string it all together.”

Wheeling Park strung together two runs in each of the first three innings to open up a 6-1 lead.

Shea Wright and Catie Nesbitt, the first two Patriots batters, were both hit by Oak Glen pitcher Maddie McKay, and eventually crossed home plate in the first despite Wheeling Park not recording a base hit in the frame.

Oak Glen got on the board in the bottom half with a McKay RBI single, but Wright and Maddie Westfall drove in runs in the second to make it 4-1. Nesbitt plated a pair of runs in the third with a base hit to make it 6-1.

“We finally got hits with runners in scoring position,” Durkin said. “We were hitting up and down and the line up. I think our girls ran the bases well and we looked good (Thursday).”

The Golden Bears started to rally, plating a run each in the fifth and sixth innings while McKay settled in and put up three-straight zeros, to cut the deficit to 6-3. The game was all-but put away in the top of the seventh, though, as the Patriots tacked on two more for the final margin.

“They are a good, solid team,” Garner said of Wheeling Park. “We had some hard hits in areas where they made plays. We had some errors that cost us as well.”

Ashley Linder, who had a base hit and a run scored, closed out the game for Wheeling Park, tossing the last two innings. She gave up a run on four hits with a pair of strikeouts.

The win is the third in a row for the Patriots after an 0-3 start.

“The bats are getting going,” Durkin said of winning three straight. “We have a lot of good-hitting girls. We’re defensively solid. Maybe this will be the turning point.”

Both teams play doubleheaders on Saturday. Wheeling Park is on the road at Warren Local, while Oak Glen hosts North Marion.

Ryan Cross brought home two runs with a single while Bradley Baker supplied a RBI single for the Wildcats (2-2).

For the Blue Dons (0-4), Luke Beatty had a double and single while Gavin Dietrich fired seven strikeouts.