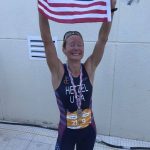 Kristen Hetzel is on top of the world.

The Wheeling Central and Wheeling Jesuit graduate reached the podium at the recent ITU Duathlon World Championships in Pontevedra, Spain.

Hetzel finished third in her age division, her best finish since starting a string of eight consecutive appearances in the event.

“It feels incredible,” Hetzel said last week via telephone from Spain, where she was wrapping up a 10-day stay before heading back home to Santa Monica, Calif.

“This is something I’ve been working toward for so long. To have this happen is just great. Everything from start to finish, this has really been a great trip.”

One that occurred just a few weeks after the national duathlon championships in Greenville, S.C. Hetzel’s finish there — second in her division and sixth overall — qualified her for the 2020 worlds in The Netherlands.

“That gave me a lot of confidence going into worlds that I was in good shape and that was I was ready to do well,” Hetzel said.

Reaching the podium, although not surprising, was quite a thrill.

“It was really exceptional when I crossed the finish line,” she recalled. “I heard the crowd screaming and I thought ‘This is more then they ever usually scream.’ So, I kind of thought I’d made it to the podium.

“The best moment was — there was a momentary pause — and I heard the announcer said ‘Kristen Hetzel, United States, bronze medalist!'”

Hetzel said she had some cramping issues during the event, but still came out OK.

“It was a really neat moment.”

One made even more special by her performance at nationals such a short time before.

“These are my best performances ever,” she noted. “It’s been a good month.”

One, she felt, she quite ready for.

“This year, I’ve never trained harder in my entire life,” she said. “I had experience, confidence and confidence in my body.”

The conditions in Spain are what one might expect — hot and humid. And the time of the race played a role, too.

The timing of worlds was different, also.

“Typically, it’s always in July or August. I usually start ramping up in February or March, but I had to do that a little earlier this year. It was a unique situation, that’s for sure.”

Still Hetzel was pleased with how she handled the new schedule.

“I do well under pressure and stress,” she said. “I tend to do really well with that, I think.”

She continues her pursuit of an acting career and, recently branched out onto her own in her physical therapy field to allow her more flexibility when it comes to athletics.

“I have another race in three weeks in California, then one in June, July, August and September,” she said.

“Even though my two biggest races of the year are over, those are still important in the sense that I get points toward my ranking.”