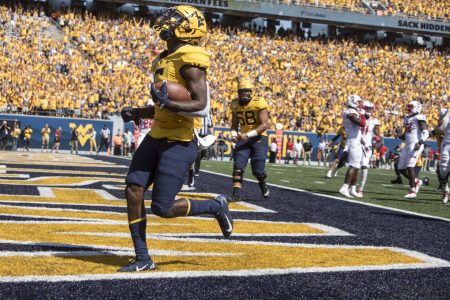 West Virginia running back Kennedy McKoy (6) runs for a touchdown during the second half of an NCAA college football game against North Carolina State Saturday, Sept. 14, 2019, in Morgantown, W.Va. (AP Photo/Raymond Thompson)

MORGANTOWN — What happens when you have the second worst rushing attack in major college football and must play without your two starting guards?

If you are WVU, you run the ball very effectively.

The Mountaineers have been nothing short of anemic on the ground in their first two games. WVU rushed for just 34 yards in beating James Madison and only 30 in a 38-7 drubbing at Missouri.

After two games, WVU was averaging a paltry 1.1 yards per carry. The longest run from scrimmage was just nine yards.

Prospects for a more potent ground attack against 2-0 North Carolina State Saturday at Milan Puskar Stadium were anything but bright. Both regular guards were out due to medical factors.

Meadowbrook product Josh Sills, a two-year starter at guard and a second-team all-Big 12 honoree last season, was sidelined with a shoulder injury. Michael Brown, the other guard starter, was out after missing practice all week due to sickness.

Coach Brown came to Morgantown from Troy with a reputation for offensive wizardry. He began to exhibit that prowess against the Wolfpack.

The resurgent ground attack made life much easier for quarterback Austin Kendall. Coach Brown said after last week’s beat down by Mizzou that it was tough to evaluate Kendall as the play around him was below standard.

The Oklahoma transfer displayed poise and confidence in and out of the pocket against N.C. State. He completed 27-of-40 passes for 272 yards and three TDs.

All told, WVU had nearly 450 in total offense to go with 44 points. It was an explosion WVU faithful have been waiting for.

“Win or lose, I thought today was going to be a defining moment for us even though it is early on. By that, I mean it was about how we responded from last week. How we responded all week in practice was key,” Coach Brown said. “I thought our defense really did a good job of holding them to a field goal after our turnover. That was big. Also, blocking a punt like we did always helps your chances. It was a great win.”

While the defense and special teams delivered, the offensive line’s sudden emergence was badly needed and hopefully a positive harbinger of things to come.

“It is hard to play offensive line. We keep trying to find the right things. That is a fun part of coaching,” Coach Brown said. “We did some different things schematically and we wanted to run more east-to-west today to get the defense moving. We wanted to focus on being more of an outside running team (Saturday).

When asked what dude meant, McKivitz responded, “Dude is a good thing. It means trusting someone to do their job. I thought I played OK today but I will never be satisfied.

“I thought our new guys on the offensive line really played well. I tried to help them all week in practice and during the game,” the former Union Local star said. “After a few series I could tell it was going to be a good day for us. It feels great to get the running game untracked.”

∫ Kennedy McKoy swept left end for a 5-yard TD in the third quarter, with McKivitz delivering the key block.

∫ Former WVU coach Dana Holgorsen is off to a 1-2 start with the Houston Cougars.

∫ Former WVU quarterbacking great Will Grier was on the WVU sideline Saturday.