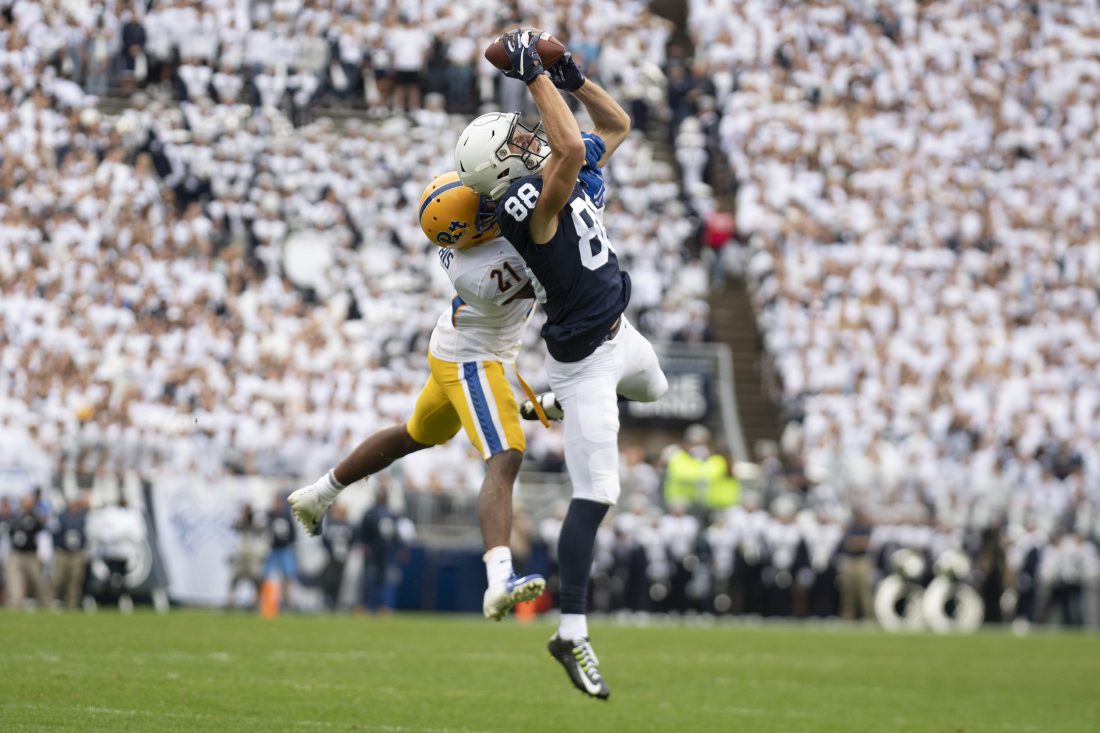 UNIVERSITY PARK, Pa. (AP) — Journey Brown ran for 109 yards and a touchdown and Penn State held off Pittsburgh in their 100th meeting, 17-10.

Pitt opted to kick a field goal on fourth-and-goal at the Penn State 1 trailing by a touchdown with less than 4 minutes to go. Alex Kessman’s 19-yard attempt clanked off the upright and the Nittany Lions (3-0) later turned away Pitt’s last-ditch possession to win their third straight in the series since it was renewed in 2016.

Clemson (3-0, 2-0 Atlantic Coast Conference) has won 18 straight games, a school record and the longest streak in the nation. It’s the second-longest winning streak by an ACC member in conference history, trailing a 29-game run by Florida State from 2012-14.

Coach Nick Saban improved to 12-1 at Alabama in SEC openers and wiped away some bad memories of his last visit to Williams-Brice Stadium nine years ago.

Tagovailoa and his receivers quickly got the Crimson Tide (3-0, 1-0) rolling with first-quarter TD passes of 24 yards to Najee Harris and 81 yards to Henry Ruggs III. Whenever the Gamecocks (1-2, 0-1) drew within range, Tagovailoa came right back to restore Alabama’s edge.

ATHENS, Ga. (AP) — Jake Fromm threw for 279 yards and three touchdowns before taking the rest of the day off, and Georgia’s defense turned in a dominating performance.

With thousands of Georgia fans wearing pink instead of red to honor Arkansas State coach Blake Anderson’s wife, Wendy, who died last month from breast cancer, the Bulldogs (3-0) took control as soon as they got their hands on the ball.

BATON ROUGE, La. (AP) — Joe Burrow completed 21 of 24 passes for 373 yards and two touchdowns, and LSU pulled away from Northwestern State in the second half.

Burrow has played through the third quarter only once in three games because of lopsided scores. He’s 75 of 90 (83.3 percent) passing for 1,122 yards and 11 touchdowns this season.

PASADENA, Calif. (AP) — Jalen Hurts racked up 439 scrimmage yards, became the first Oklahoma quarterback to pass for 200 yards and rush for 100 in the first half and directed the Sooners to scores on their first six drives.

The graduate transfer from Alabama completed 15 of 20 passes for 289 yards and three touchdowns and ran 14 times for 150 yards and a score. CeeDee Lamb and Charleston Rambo each had two touchdowns to help the Sooners (3-0) win their 21st straight true road game.

SOUTH BEND, Ind. (AP) — Ian Book threw a career-high five touchdown passes and Notre Dame’s defense came up with three first-half interceptions in its final tuneup before a showdown at No. 3 Georgia.

Book rebounded from a lackluster opening performance in a 35-17 victory at Louisville to complete 15 of 24 passes for 360 yards. Book finished with another 46 yards rushing yards and a 1-yard TD.

The Fighting Irish (2-0) had their way with the Lobos (1-1), who were without head coach Bob Davie. Saga Tuitele acted as head coach for Davie, the former Irish head coach from 1997-2001 who was hospitalized following New Mexico’s opening victory over Sam Houston State.

AUBURN, Ala. (AP) — JaTarvious Whitlow rushed for 135 yards and two touchdowns and Bo Nix ran and passed for scores to lead Auburn.

The Tigers (3-0) piled up 467 rushing yards — and three 100-yard rushers — in their final tune up before Southeastern Conference play. They also got some big plays running and passing from Nix, including a 49-yard flea flicker to Eli Stove for a touchdown in the third quarter.

Franks, the Gators’ third-year starter, was carted off with a right leg injury late in the third quarter with his team trailing 21-10. Stopped for no gain on fourth-and-1 at the Kentucky 38, Franks appeared to bend backward on the play. Medical personnel placed an inflatable cast under his right leg.

In the first quarter, Moss passed Tony Lindsay for second place on Utah’s career rushing yards list. His 1-yard scoring plunge later in the quarter moved him into the No. 2 spot by himself in career rushing touchdowns at 27.

Ehlinger threw a 25-yard touchdown pass to Roschon Johnson to cap the opening drive before throwing touchdown passes of 53 yards and 12 yards to Smith in the first half. Ehlinger finished 23 of 27 passing in less than three quarters.

COLLEGE STATION, Texas (AP) — Freshman Isaiah Spiller ran for 116 yards and two touchdowns and Kellen Mond threw for 317 yards with a touchdown pass and a run in three quarters to lead Texas A&M.

Spiller shined in the first game since Jashaun Corbin sustained a season-ending hamstring injury last week at Clemson, running for touchdowns of 1 and 34 yards. Mond was 20 of 28 with an interception.

EAST LANSING, Mich. (AP) — Eno Benjamin reached the ball to the goal line for a 1-yard touchdown run with 50 seconds remaining, and Arizona State beat Michigan State after the Spartans had a tying field goal negated for having too many men on the field.

AMES, Iowa (AP) — Nate Stanley threw for 201 yards and ran for a score, and Iowa made a big fourth-down stop, allowing the Hawkeyes to beat Iowa State for the fifth straight time.

PHILADELPHIA (AP) — Kenny Yeboah put Temple ahead on a one-handed touchdown catch late in the fourth quarter, and the Owls used two clutch stops at the goal line to beat Maryland.

The Owls (2-0) defeated an unbeaten Maryland team for the second straight season and got coach Rod Carey off to a nice start in his first season on Temple’s sideline.

SEATTLE (AP) — Jacob Eason threw a 47-yard touchdown pass to Hunter Bryant on the third play of the game and added two more and Washington rebounded from a loss beat Hawaii.

Eason and the Huskies (2-1) overwhelmed the Rainbow Warriors, taking a 21-0 lead in less than 9 minutes.

PROVO, Utah (AP) — Dayan Ghanwoloku intercepted a tipped pass in overtime after Jake Oldroyd kicked a 43-yard field to give BYU the lead, and the Cougars beat Southern California for second straight OT victory over a traditional power program.

Zach Wilson threw for 280 yards and a touchdown and ran for another score for BYU (2-1), which won at Tennessee last week. Ty’Son Williams added 99 yards on 19 carries.

The Cavaliers (3-0, 2-0 Atlantic Coast Conference) trailed for much of the night and looked to have blown their chance when Brian Delaney missed a tying extra point with 6:02 to play. A three-and-out by the Seminoles and a six-play, 72-yard Virginia drive capped by Taulapapa’s 2-yard run gave them the lead.

HUNTINGTON, W.Va. (AP) — Isaiah Green threw two touchdown passes, including a 43-yard strike to Xavier Gaines that put Marshall ahead for good, and the Thundering Herd beat Ohio 33-31 on Saturday.

The play occurred with 7:45 remaining to play. Just 3¢ minutes before that, Ohio took a 31-27 lead when Nathan Rourke rambled for a 72-yard TD run.