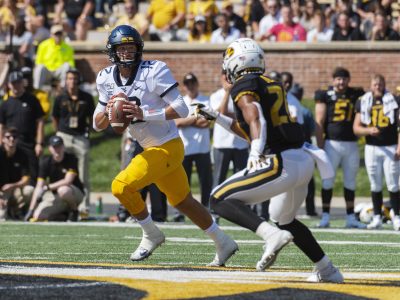 MORGANTOWN — The road proved a bumpy one for West Virginia University this past Saturday.

After a 20-13 debuting win over James Madison at Milan Puskar Stadium, the Mountaineers found Columbia, Missouri, an unfriendly venue. Missouri routed WVU by a 38-7 count.

The outcome left both teams at 1-1. The Tigers were upset by Wyoming in their opener.

WVU faces a line-in-the-sand moment when it plays host to North Carolina State in a noon kick Saturday. The Wolfpack are 2-0 via lopsided triumphs over East Carolina (34-6) and West Carolina (41-0). The Mountaineers launch Big 12 play next week at Kansas.

N.C. State has been installed as a touchdown favorite.

For the second straight game WVU displayed no signs of an effective rushing attack. The Mountaineers gained 30 yards on the ground against Mizzou and 34 against James Madison.

Alec Sinkfield is the team’s leading rusher with just 30 yards on 10 carries. The Mountaineers are averaging an anemic 1.1 yard per carry. The longest run from scrimmage is 9 yards.

Changes on the offensive line commenced against Missouri.

Josh Sills started at center in the opener against James Madison. He was moved back to guard against Mizzou. The former Meadowbrook standout has started the last two years at guard.

“We’ve got to go back to the drawing board,” Sills said. “You have to win your one-on-one matchups.”

The one bright spot on the offensive line is Colton McKivitz. The three-year starter from Union Local has made a seamless transition from right tackle to left tackle.

“We didn’t play well up front. We will give some other guys an opportunity. But they have to show in practice they are ready to play,” Brown said during the Big 12 coaches’ teleconference Monday. “We knew we would have a challenge in Year 1. But we need to develop the guys we have here and do a great job of recruiting.

“We know it’s not going to be a smooth road going forward. I am not discouraged about the direction we are going. I am disappointed on how we played against Missouri.”

There was much to be disappointed with.

“Our offense was non-existent. Defensively, we had no takeaways, missed five sacks and missed 22 tackles,” Brown said. “On the positive side, we did limit big plays and the defense played hard in the second half.”

WVU quarterback Austin Kendall has completed 42 of 67 passes so far for 397 yards. The Oklahoma transfer has tossed three TD passes while being picked off twice.

“It’s tough to evaluate, honestly,” Brown said of Kendall’s play last Saturday. “I’ve got him getting hit, I think, eight times in the first three series. I thought that there were times when he threw the ball really well. I thought he showed courage by staying in the pocket and continued to deliver the ball.

“His decision-making has got to be better. He’s got to do a better job with his eyes. So, I think there is plenty of room for improvement by him, but we’ve got to play better around him.”

Brown has much praise for this Saturday’s foe.

“N.C. State is coming off two straight nine-win seasons. They have the second most ACC wins during that time. Only Clemson has more,” he said. “They have done a great job of recruiting as well as developing their players.

“Offensively they are very well balanced and physical up front. They have running back by committee. Defensively, they have a three-man front. They have given up only 49 yards rushing in two games.”

Despite WVU’s lackluster performance at Missouri, N.C. State head coach Dave Doeren is not taking the Mountaineers for granted.

“They have a young roster with a new football staff. They are still trying to feel their way about. It takes time,” Doeren said during Tuesday’s press conference. “Look at their history, it is an excellent program. WVU is a good football team. They are fast and aggressive.”

Brown realizes Saturday’s game will reveal much about his team’s character.

“This is our first real adversity. Now we see how we handle it and how we respond,” Brown said. “Growth occurs in failure and we failed Saturday. We will play hard and tougher. This is a great challenge for us.”

Prior to Saturday’s game, WVU will recognize its 29th WVU Sports Hall of Fame class during induction ceremonies inside the Caperton Indoor Practice Facility.

∫ WVU has recorded six sacks this season, ranking first in the Big 12 and 32nd nationally.

∫ N.C. State and WVU have met 10 times on the gridiron with each team winning five times.

∫ Doeren is in his seventh year as head N.C. State coach. He is 45-34with the Wolfpack.