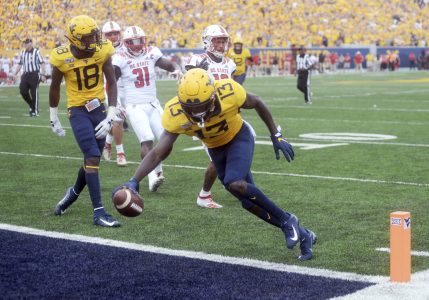 MORGANTOWN — What a difference a week makes.

The West Virginia football nation was in a funk after the Mountaineers 38-7 drubbing at Missouri on Sept. 7.

Gloom and doom, however, were swept away this past Saturday when WVU turned in an impressive 44-27 triumph over previously unbeaten North Carolina State. The mild upset — the Mountaineers were a TD underdog — helped to change the course of the season.

A win over the Jayhawks is paramount if the Mountaineers are going to have a legitimate shot of a winning season. The schedule gets much tougher after they exit Lawrence.

After a bye week, the Mountaineers host Texas. The Longhorns have their sights set on a possible Big 12 title this fall. A week later, Iowa State comes calling to Morgantown.

Kansas opened the season under new head coach Les Miles in less than stellar fashion. The Jayhawks slipped past Indiana State, 24-17, in their opener before being upset by Coastal Carolina.

What appeared to be another downtrodden season for Jayhawks took a major upswing last Friday when Kansas rolled into Chestnut Hill and blasted Boston College, 48-24.

The Jayhawks are bidding for their first 3-1 start since 2009. They visit TCU next week.

WVU’s impressive outing against N.C. State was due, in a large part, to a newly found effective running game.

The Mountaineers entered the game with the second worst rushing attack in major college football. In its first two games, WVU rushed for a combined a 64 yards.

That all changed against the Wolfpack. An offensive line, featuring two new starting guards, carved the way for a 177 rushing yards.

As usual, Union Local’s Colton McKivitz turned in a stellar effort at tackle. Brown named the four-year starter as the offensive lineman of the week. The 6-foot-7, 317-pounder graded out at 93 percent on his 72 snaps.

“Not as tough as I thought it would be,” McKivitz said when asked what it was like playing without his two starting guards. “Those young guys played lights out and didn’t worry about making mistakes. They had a good week of practice. What was cool is they asked for help during practice.

“Our message against N.C. State was to play physical and angry. You can’t be a nice guy and play on the offensive line. Now that people see what we can do, it will be expected from us every game. I thought I played all right (Saturday). But I will never be satisfied.”

When asked his thoughts about McKivitz during Tuesday’s press conference, Brown did not hold back his praise.

“He is just a worker. He is the same every day. Consistency is a word we use in our program and may be our most complimentary term we have. He is very consistent every day,” Brown noted. “It doesn’t doesn’t matter whether Colton is sick, tired, has an exam or whatever he’s got going on the outside, when he steps in this building we are going to get a consistent effort andexecution. That is the highest compliment I can give him. He is consistent every day.”

Brown noted that after Missouri’s lackluster performance that standing pat was not feasible. Changes needed to be made and changes were made, paying positive dividends.

“You can’t continue to do the same things,” Brown said Monday during the Big 12 coaches teleconference. “As coaches, just because we had success in the past doing certain things you have to adapt.

Meadowbrook product Josh Sills, a two-year starter at guard and a second team All-Big 12 honoree last season, was sidelined with a shoulder injury. He remains questionable for this week, Brown noted Tuesday.

“It was a three-phase win for us against a real good team,” Brown said about the N.C. State triumph. “But it was not perfect by any means. We need to do better on third downs. The crowd played a huge factor.”

When it comes to Kansas, WVU will be dealing with two talented running backs in Pooka Williams and Khalil Herbert. Williams, a highly touted recruit three years ago, has rushed for 220 yards while Herbert has garnered 357. Quarterback Carter Stanley, firmly affixed on the hot seat after the first two games, has completed 53 of 75 passes for 586 yards with five TDs and three picks.

“Kansas has two of the best running backs in our league. They are both fast and hard to tackle,” Brown said. “They are coming off a really impressive win. Coach Miles and his staff have done a great job.

“We need to handle this road trip better than we did at Missouri. We need to continue to get better. N.C. State was a foundation win.”

When Kansas hired Miles, it hired instant credibility. Miles guided LSU to a national title in 2007 after a successful career at Oklahoma State.

“I certainly like where we are at now. Hopefully, it now motivates them (Kansas players) to do special things,” Miles said during his Tuesday press conference. “Our kids enjoyed the feeling of victory leaving their stadium. I will be surprised if they don’t want more. It is intoxicating.

∫ Redshirt freshman Sam James was named Big 12 Newcomer of the Week. He caught nine passes for 155 yards and TD.

∫WVU has recorded nine sacks so far, tops in the Big 12.

∫ One of Brown’s many classy moves is presenting a community service award to one of his players each week.