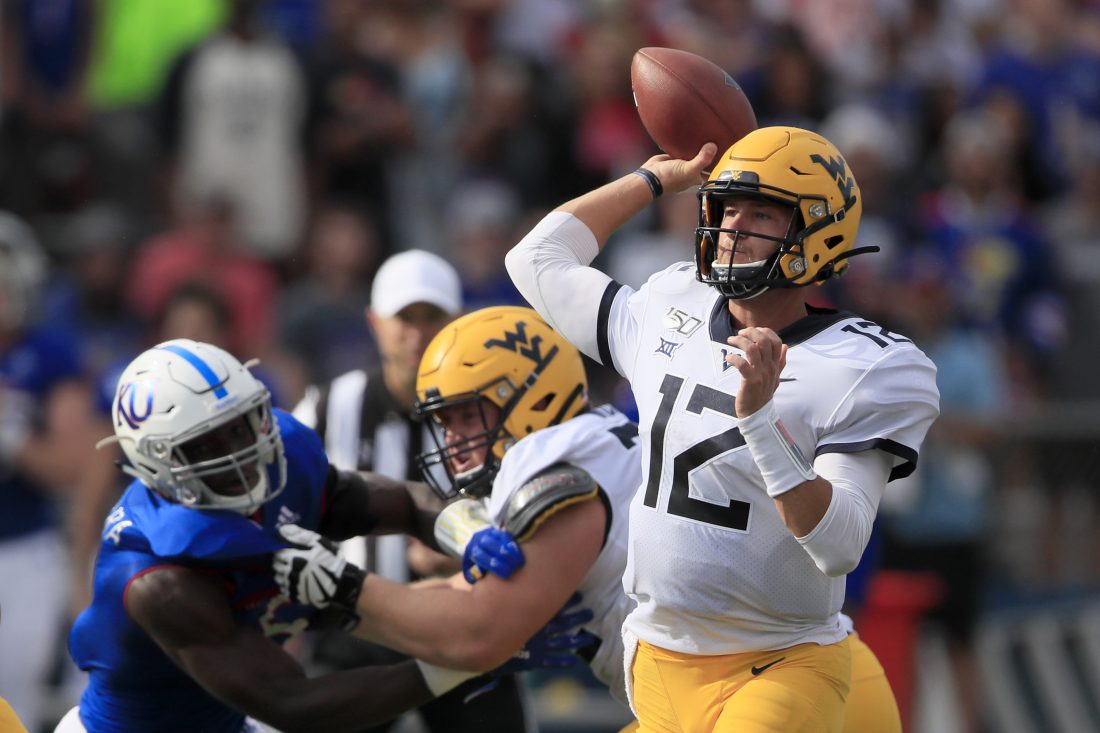 West Virginia quarterback Austin Kendall (12) passes to a teammate during the first half of an NCAA college football game against Kansas in Lawrence, Kan., Saturday, Sept. 21, 2019. Kendall passed for 202 yards in the game. West Virginia defeated Kansas 29-24. (AP Photo/Orlin Wagner)

LAWRENCE, Kan. — Martell Pettaway couldn’t remember the last time he spent an entire game watching from the sideline, never once getting onto the field after warmups — much less getting a carry.

That was the case for West Virginia’s senior running back a week ago.

But after the game-plan precluded him from seeing any action in a win over North Carolina State, Pettaway made up for it on his very first carry Saturday. He shook a couple Kansas defenders at the line of scrimmage, broke into the open and ran 23 yards for a third-quarter touchdown.

Pettaway added another score in the fourth quarter, helping the Mountaineers squeak out a 29-24 victory over the Jayhawks in the Big 12 opener for both teams.

“The two touchdown runs he had were big-time plays,” said West Virginia coach Neal Brown, who leaned on running backs Kennedy McCoy and Leddie Brown against the Wolfpack. “Martell had a good week of practice and that’s the kind of guy he can be.”

McCoy added 73 yards rushing and a touchdown for the Mountaineers (3-1). Kendall Austin threw for 202 yards, and Evan Staley bounced back from an early miss to hit three field goals.

Meanwhile, their defense held Kansas (2-2) to 377 yards total offense, one week after new coach Les Miles’ bunch had 567 yards and five TDs in a road rout of Boston College. And much of the yardage Saturday came as the Jayhawks drove frantically for a touchdown with 2:10 left in the game.

They tried an onside kick but it went out of bounds, and by the time West Virginia gave the ball back, the Jayhawks only had time for a hook-and-ladder from midfield that came up short.

“Including the last play I felt like we were going to win,” Miles said. “If we could’ve made a cut in the back end of that play we may have.”

Carter Stanley led the Jayhawks with 235 yards passing and three touchdowns, but he also threw a costly interception when they were trailing 23-17 midway through the fourth quarter.

Pettaway finished the ensuing drive with his second TD run to make it a two-possession game.

“Coach Brown just told me I could play better. I took that to do better in practice,” said Pettaway, who ran for more than 600 yards last season. “It was a good week of practice for me and the offensive line did a hell of a job.”

West Virginia and Kansas had played to a first-half draw, though the real winner was the wind. It was whipping out of the south at 25 mph, making it tough for both offenses to move the ball.

The Mountaineers scored first — with the wind — on McCoy’s short plunge, then Kansas answered — also with the wind — when Stanley hit Kwamie Lassiter with a 28-yard TD strike.

The momentum shifted late in the first half, though. The Jayhawks had the ball, the wind and three timeouts in the closing minutes but went three-and-out and punted. West Virginia then raced 51 yards in just 49 seconds to set up Staley’s go-ahead field goal.

The Mountaineers kept the momentum to start the second half.

Pettway, getting his first carry of the game, picked through a couple tackles at the line of scrimmage and cruised 23 yards for the score. And when Kansas got a chip-shot field goal and appeared to recover the onside kick, Jamahl Horne was flagged for kick-catch interference.

West Virginia was given the ball back and drove for another field goal for a 20-10 lead.

Stanley gave the Jayhawks a chance when he hit Andrew Parchment on a 75-yard catch-and-run. But after West Virginia got another field goal, the Jayhawks’ quarterback ruined any chance of a comeback when his throw to the sideline was picked off by the Mountaineers’ Keith Washington II.

Pettaway’s second touchdown run made it a two-score game for West Virginia.

“They weren’t really doing anything we hadn’t seen, hadn’t prepared for all week,” said the Jayhawks’ Bryce Torneden. “It really just came down to little things we were doing to ourselves. Kind of self-inflicted wounds.”

West Virginia was abysmal on its last road trip, losing 38-7 to Missouri. But the Mountaineers bounced back to spank North Carolina State last weekend and are flying high entering a week off.

Kansas was trying to build on its win in Chestnut Hill, but two turnovers and the penalty on the onside kick cost valuable possessions. Might have cost its best chance to win a Big 12 game, too.

West Virginia has a week off before Texas visits Morgantown.

Kansas has a morning kickoff against TCU next Saturday.